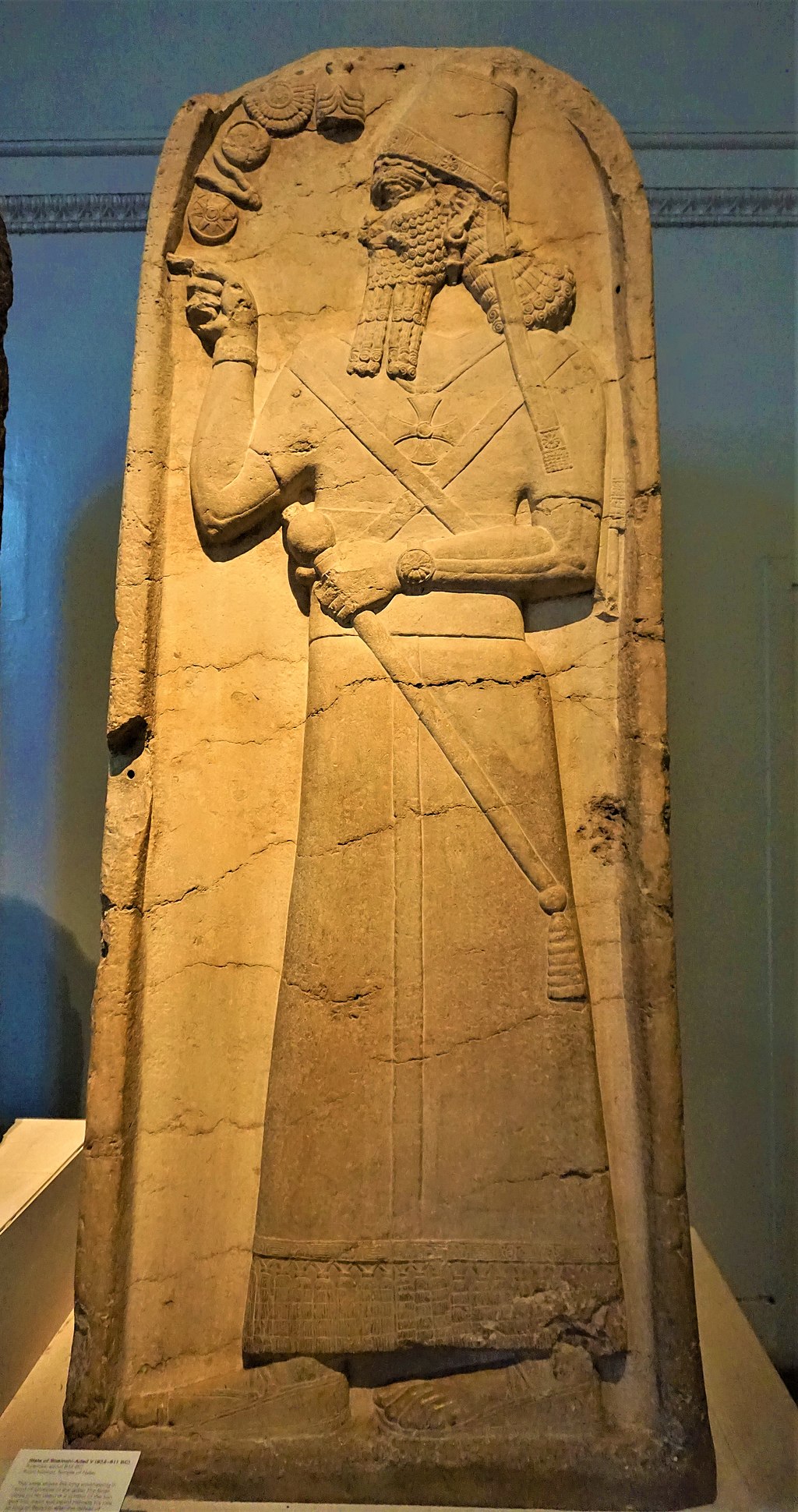 The Stela of Shamshi-Adad V is a massive round-topped white limestone monolith that portrays the Assyrian King worshipping his gods.

The monarch is shown wearing a conical hat, and full beard with his right hand extended snapping his fingers and his left hand holding a mace, his symbol of royal authority.

A significant amount of cuneiform text covers the sides of the stela, recording the king’s military campaigns.

The king stands in the gesture of blessing before five divine emblems representing five deities, which are represented symbolically in the top left-hand corner of the stela.

The five symbols are the horned helmet, the winged disk, the crescent, the forked line, and the eight-pointed star. The cross worn as an amulet by the king is a symbol of the sun god.

Shamshi-Adad V was named after a god and was the King of Assyria from 824 to 811 BC. The early years of his reign saw a severe struggle for his succession.

The revolt was led by his rebellious brother, who succeeded in bringing to his side 27 principal cities, including Nineveh.

The rebellion lasted for six years and weakening the Assyrian empire, and its ruler and this weakness continued to reverberate in the kingdom until the reforms of future kings.

The Assyrian Empire was a major Mesopotamian empire of the ancient Near East and the Levant named after its original capital, the ancient city of Aššur.

It existed as a state from the 25th century BC until its collapse in the early 600’s BC. Several Neo-Assyrian states arose latter at different times.

At its peak, the Assyrian empire stretched from Cyprus and the East Mediterranean to Iran, and from what is now Armenia and Azerbaijan in the Caucasus, to the Arabian Peninsula, Egypt and eastern Libya.

The ancient Assyrians followed the ancient Mesopotamian religions, with their national god Ashur having the most prominent role during the Assyrian Empire.

The ancient Assyrian religion gradually declined with the advent of Syriac Christianity between the first and tenth centuries.

According to the Biblical generations of Noah, the city of Aššur was founded by a biblical Ashur, the son of Shem. Later generations worshiped him as the city’s patron god. The ancient city of Aššur is located in modern-day Iraq.

Tour the Middle East Collection at the British Museum

The rise and fall of the Assyrian Empire

“There is no shame in not knowing the shame lies in not finding out.”
– Assyrian Proverb