The Rosetta Stone is inscribed with three languages for the same decree issued at Memphis, Egypt, in 196 BC by King Ptolemy V.

As the decree is the same in all three versions, the Rosetta Stone provided the key to decipher Egyptian hieroglyphs.

The reason for the  Ancient Greek language is that the Rosetta Stone was carved during the Ptolemaic dynasty.

Ptolemy was a Macedonian Greek who was one of Alexander the Great’s generals and was appointed the leader of Egypt after Alexander’s death in 323 BC.

He established a royal family, which ruled the Kingdom of Egypt during its Hellenistic period, which lasted nearly 300 years.

The Ptolemaic rulers introduced Greek to the Egyptian government bureaucracy. The last of the Ptolemaic dynasty was Queen Cleopatra.

The Rosetta Stone was found in the Nile Delta of Egypt. The specific location was in the town of Rashid, which was called Rosetta by the French and English.

The French soldiers who discovered this granodiorite stele were part of Napoleon’s Egyptian expedition of 1798 – 1801. 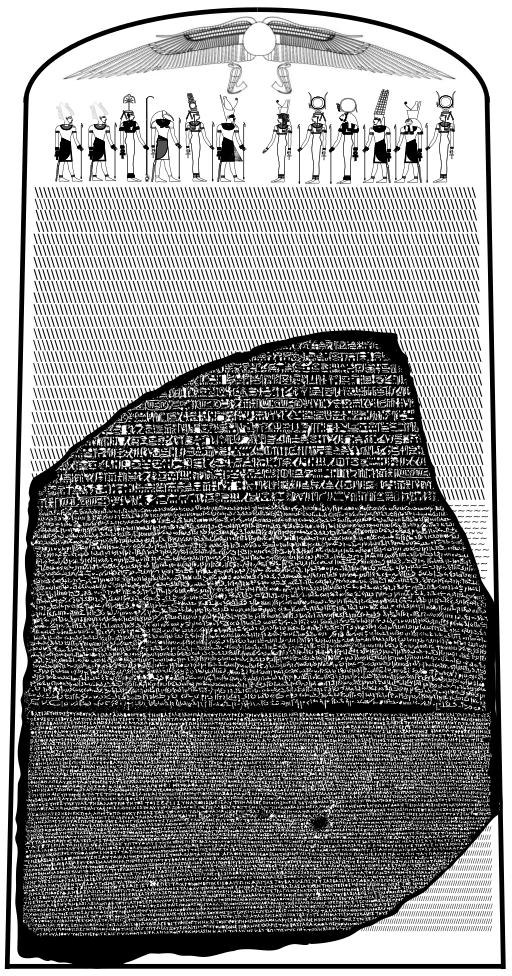 A possible reconstruction of the original stele

The Rosetta Stone or stele was found accidentally when a group of French soldiers who were ordered to demolish an old wall to make way for extensions to a fort called Fort St Julien.

The stone, carved in black granodiorite, it is now assumed to have been initially displayed in a temple. It was most probably moved from its original place during the early medieval period and was eventually used as building material in the construction of Fort Julien.

The French officers, fortunately, recognized the importance of this accidental discovery and was sent to Cairo to be placed in an Institute established by Napoleon.

The “Institut d’Égypte” was established in 1798 by Napoleon Bonaparte to research Egyptology during his Egyptian campaign.

Napoleon’s Egyptian expedition included scientists, artists, and scholars who were keen to discover how to read Egyptian hieroglyphics.

To help them with this endeavor, they used the Rosetta Stone as a printing block to make copies which they sent to scholars across Europe to help with their deciphering efforts.

In Europe, at this time the English were at war with the French, and so the English started a naval blockade of Napoleon’s Expedition in Egypt which cut off the French forces from its country home base in France.

The English army then began to threaten the French troops in Cairo, and the French decided to combine their force strength in Alexandria.

The French scholars followed the military and relocated the Rosetta Stone and their collection of Egyptian antiquities to Alexandria.

In 1801 under the terms of the “Treaty of Alexandria,” the French capitulated, and the Egyptian objects collected by the French became the property of the British Crown.

The objectives included the Rosetta Stone, which was shipped to England in 1802 and presented to the British Museum.

The Rosetta Stone, at the time, was the first Ancient Egyptian bilingual text discovered, and it aroused widespread public interest with its potential to decipher this previously untranslated hieroglyphic language.

The British thus continued the effort to translate Egyptian hieroglyphics by making lithographic copies and plaster casts of the Rosetta Stone, which were sent to universities and scholarly institutions in Europe.

The first full translation of the Greek text was published in 1803. It took 20 years of work and controversy before Jean-François Champollion announced the interpretation of the Egyptian scripts in Paris in 1822.

Champollion eventually formulated a system of grammar for the Ancient Egyptian language and laid the foundations on which our current knowledge is based. The Rosetta Stone played a central role in this complex work effort.

The left and right sides of the Rosetta Stone, containing the faint English inscriptions saying: (L) “Captured in Egypt by the British Army in 1801” (R) “Presented by King George III”.

There is a long-running dispute over the relative contributions of Thomas Young and Jean-François Champollion’s contributions to the decipherment of the ancient Egyptian text.

Thomas Young (1773 – 1829) was an English polymath and physician, who made some insightful first-time innovations in deciphering Egyptian hieroglyphs based on the Rosetta Stone.

Today he is known primarily as the decipherer of the Egyptian hieroglyphs and a founding figure in Egyptology.

The most recent controversy dates to 2003 when Egypt first requested the return of the Rosetta Stone. The chief of Egypt’s Supreme Council of Antiquities has formally asked that The Rosetta Stone be repatriated to Egypt.

In general, there is real opposition among most national museums to the repatriation of objects of international cultural significance, such as the Rosetta Stone. As well as the British Museum, other institutions are facing repatriation demands.

The Parthenon Marbles are being claimed by Greece from the British Museum and the Louvre. Turkey is claiming the Pergamon Altar from the Pergamon Museum in Berlin.

Nigeria has requested the return of The Benin Bronzes from many museums. Egypt has made claims for primary Ancient Egyptian objects from some Museums outside Egypt.

A range of Latin American countries has also made demands for the return of pre-Columbian artifacts from museums in the United States.

How The Rosetta Stone Unlocked Hieroglyphics

Ancient Egypt and Sudan Collection at the British Museum

Ancient Greece and Rome Collection at the British Museum

The Not-So-Simple Process of Deciphering Hieroglyphs

Britain, Europe, and Prehistory Collection at the British Museum

“For many, the icon of the British Museum is the Rosetta Stone, that administrative by-product of the Greek imperial adventure in Africa.”
– Neil MacGregor