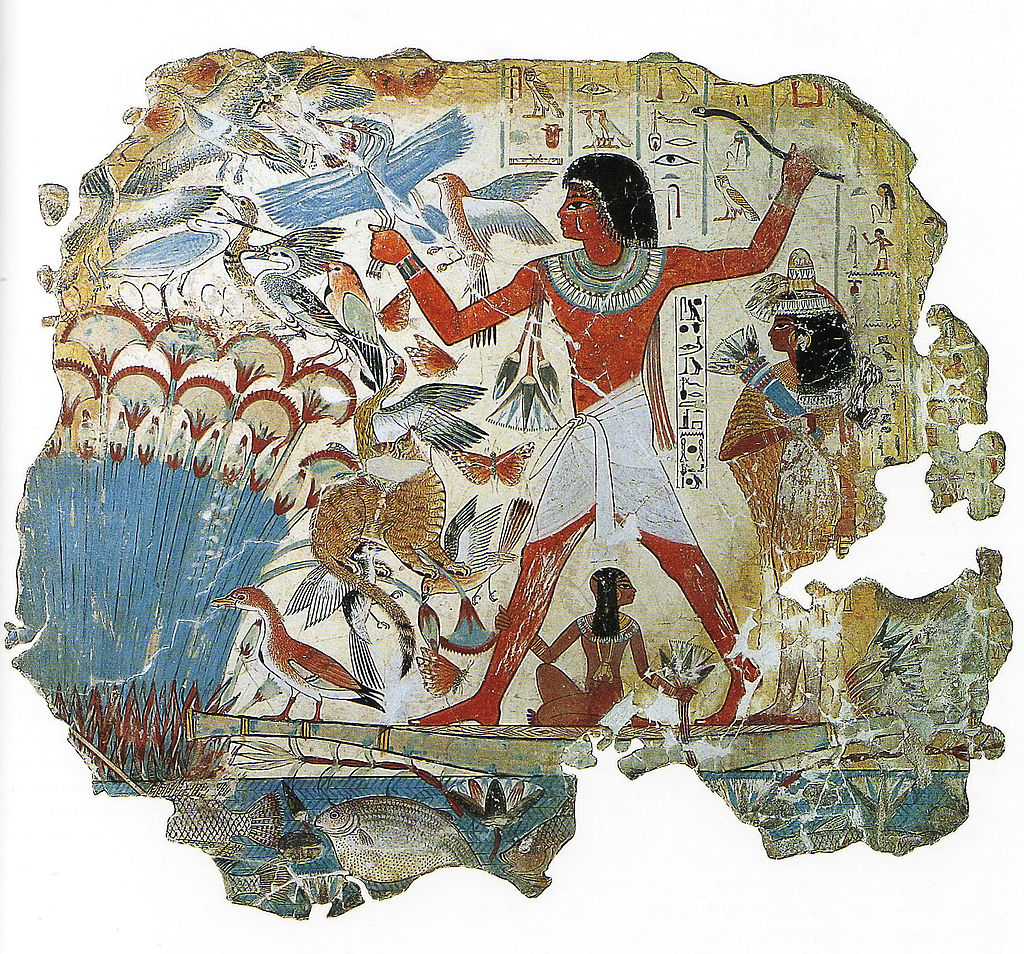 The Tomb of Nebamun is the source of some of the most famous surviving ancient Egyptian polychrome tomb-painting scenes.

This scene depicts Nebamun standing on a small boat, fishing and fowling in the marshes of the Nile with fish shown beneath the water-line.

His wife stands behind him, portrayed on a smaller scale, and his daughter sits beneath him, holding one of his legs. Nebamun holds a throw-stick in one hand and decoy herons in the other.

His cat is shown catching three birds, and many other birds are depicted flying away after being startled from the papyrus-thicket. This Tomb-Painting is one of the most significant paintings from ancient Egypt to have survived.

Nebamun was an official scribe and grain counter at the temple complex in Thebes. His Tomb was located in the Theban Necropolis situated on the west bank of the Nile at Thebes (present-day Luxor), in Egypt.

The tomb was discovered in 1820 by Yanni d’Athanasi, who was acting as an agent for the British Consul-General. The workmen hacked out the fresco painted pieces with knives, saws, and crowbars. D’Athanasi later died without ever revealing the tomb’s exact location.

Nebamun was a middle-ranking official, who’s role was as scribe and grain accountant about 3,300 years ago in ancient Egypt. He worked at the vast temple complex near Thebes, where the state-god Amun was worshipped.

Nebamun’s name is translated as “My Lord is Amun.” His association with the temple, coupled with the importance of grain supplies to Egypt, meant that he was a person of considerable status, though not of the highest rank, in Egyptian society.

A fresco from the tomb of Nebamun

Although the exact location of that tomb is now lost, most of the wall paintings from the tomb were acquired by the British Museum. They are regarded as amongst the museum’s greatest treasures.

Facts about the Tomb of Nebamun

Hunting scene from the tomb-chapel of Nebamun

Egyptian Life and Death: the Tomb-chapel of Nebamun – Audio Only

“Know the world in yourself. Never look for yourself in the world, for this would be to project your illusion.”
– Egyptian Proverbs