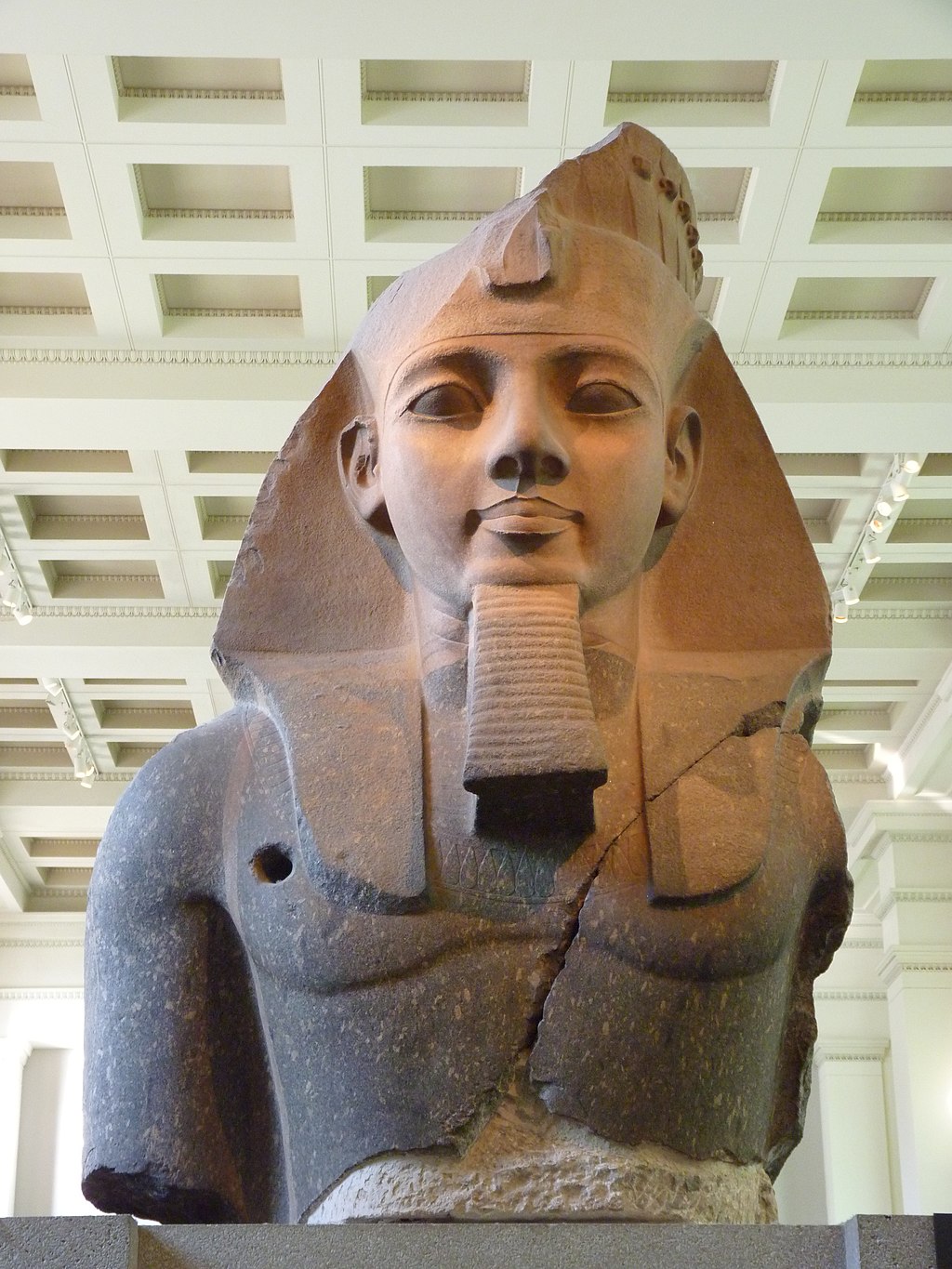 Younger Memnon is an Ancient Egyptian statue, one of two colossal granite heads from the Ramesseum mortuary temple in Thebes. It depicts Pharaoh Ramesses II wearing the Nemes head-dress with a cobra diadem on top.

The damaged statue is one of a pair that initially flanked the Ramesseum’s doorway. The head of the other figure can be seen at the Ramesseum temple near Luxor.

The Younger Memnon was cut from a single block of two-tone granite. The eyes look down slightly; this unique feature is more exaggerated than the usual Egyptian conventions.

Also, the sculptures exploited the different colors of the stone to make the head a lighter tone compared to the remaining body structure, making this statue rather unique.

During Napoleon’s 1798 Expedition to Egypt, the French tried but failed to transport this colossal statue to France. It was during the French attempt that the hole on the right of the torso just above Ramesses’s right nipple was made.

Eventually, after the British defeated Napoleon, the British Consul General in Cairo succeeded in paying for significant engineering and a workforce to have this vast sculpture sent to London. The British Museum in 1821 acquired it.

Napoleon Bonaparte’s campaign in the Ottoman territories of Egypt and Syria, during 1798–1801, was launched to defend French trade interests and to establish a scientific enterprise in the region.

On the scientific front, the expedition led to the discovery of the Rosetta Stone, creating intense interest in Egyptology.

Despite an initially successful expedition, Napoleon was eventually forced to withdraw after the defeat of the supporting French fleet by the British Navy at the Battle of the Nile.

In London, Ramesses II statue acquired the name “The Younger Memnon,” after the name “Memnonianum,” which was the name from classical Roman times for the Ramesseum Temple site.

The figures at the entrance of the mortuary temple of Amenhotep III were associated with Memnon in classical times.

In Greek and Roman mythology, Memnon was an Ethiopian king and was considered to be almost Achilles’ equal in battle skills. According to legend, during the Trojan War, he brought an army to Troy’s defense.

The Ramesseum is the vast memorial temple of Pharaoh Ramesses II. It is located in the Theban necropolis across the River Nile from the modern city of Luxor.

The name was coined by Jean-François Champollion, who visited the ruins of the site in 1829 and first identified the hieroglyphs making up Ramesses’s names and titles on the walls.

In antiquity, Ozymandias was the Greek name for the Egyptian pharaoh Ramesses II. Shelley revived this name, in his famous Ozymandias poem in 1817, soon after the announcement of the British Museum’s acquisition of a statue of Ramesses II.

The statue’s reputation in England preceded its actual arrival, and scholars believe that Shelley was inspired by the history of this statue to write his Ozymandias poem.

The theme of the “Ozymandias” poem is the inevitable decline of rulers with their pretensions to greatness.

‘My name is Ozymandias, king of kings;
Look on my works, ye Mighty, and despair!’
– Percy Shelley’s “Ozymandias”

“I am great OZYMANDIAS,” saith the stone,
“The King of Kings; this mighty City shows
“The wonders of my hand.”
– Horace Smith’s “Ozymandias”