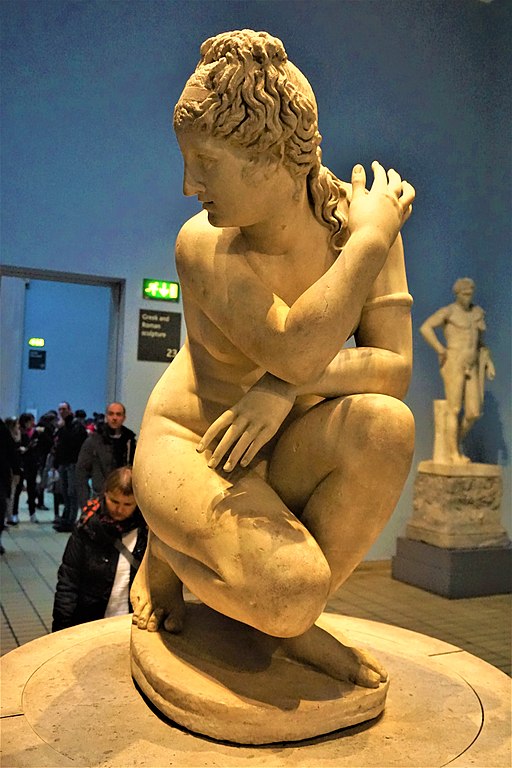 The “Lely Venus” is a marble copy of an original Greek sculpture of Aphrodite surprised at her bath and is today called the “Crouching Venus” type, and this copy dates to about 100 AD.

Venus crouches with her right knee close to the ground, turns her head to the right, and, in most versions, reaches her right arm over to her left shoulder to cover her breasts.

To judge by the number of copies that have been excavated on Roman sites in Italy and France, this variant on Venus was popular and widespread.

The Greek sculptor Praxiteles, in the fourth century BC, was one of the first to create a life-size naked statue of Aphrodite, Venus is her Roman name. Subsequent Greek sculptors created several new types of nude Aphrodite figures.

This trend reflected the changes in male attitudes towards depicting women naked. Previously only male statues had been depicted naked. The Greek original of this copy was of Aphrodite by Doidalses of Bithynia.

Most of these statues show Aphrodite ineffectually attempting to cover her nakedness with her hands or with fallen drapery.

This action only succeeds in drawing the viewer’s eye. In this statue, the naked Aphrodite crouches down and turns her head to her right, as if surprised.

The three-dimensionality of the statue is typical of Ancient Greek sculpture, as is the elaborate hairstyle.

Several examples of the Crouching Venus have long been in prominent royal and aristocratic collections. These statues have influenced more recent sculptors ever since the late Renaissance, and she has influenced artists since the early 1500s.

This statue was first documented in the Gonzaga collection in Mantua, Italy. While there, it was seen by the artist Rubens, while on diplomatic and art-collecting duties for Charles I of England.

This “Crouching Aphrodite” was soon purchased from the Gonzaga, in 1628, for Charles I of England. On the dispersal of Charles’s art collections during the Commonwealth, it came into the possession of the painter and connoisseur Sir Peter Lely, from whom it derives its name.

Two years after Lely’s death (1682), it was re-acquired from his collection for the Royal Collection. It is now on long-term loan to British Museum, following treatment by their conservators, and is currently on prominent display.

The Romans adapted the myths and iconography of her Greek counterpart Aphrodite for Roman art and Latin literature.

In the later classical tradition of the West, Venus became one of the most widely referenced deities of Greco-Roman mythology as the embodiment of love and sexuality.

Aphrodite was an ancient Greek goddess associated with love, beauty, pleasure, and procreation.

She is identified with the planet Venus, which is named after the Roman goddess Venus, who inherited many of Aphrodite’s attributes in the Roman culture.

The cult of Aphrodite was primarily derived from that of the Phoenician goddess Astarte. Further back in time, Astarte was derived from the East Semitic goddess Ishtar, whose worship was based on the Sumerian cult of Inanna.

Explore Greek and Roman Sculpture at the British Museum

Colors of Ancient Europe – Naked Aphrodite crouching at her bath