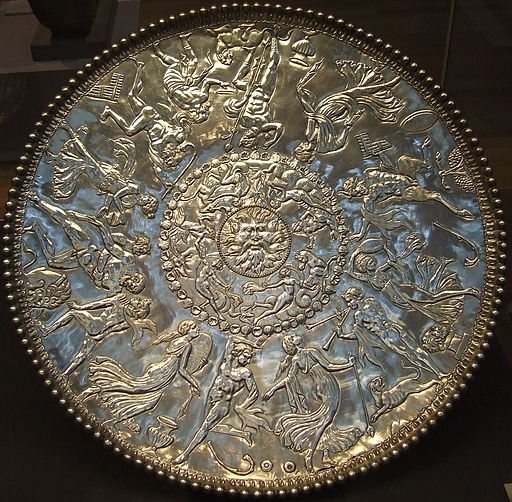 The Mildenhall Treasure is a massive hoard of 34 masterpieces of Roman silver tableware from the fourth century AD.  It consists of over thirty items and includes the Great Dish, which weighs over 8kg.

This collection of silver tableware is the most valuable Roman collection of objects found in Britain. Most of the objects are comparatively large, and all are of very high-quality artistry. The treasure was found at West Row, near Mildenhall, Suffolk, England, in 1942.

The treasure consists of silver tableware of types current in the 4th century and concealed at some time in that century. The hoard consists of:

The hoard was discovered in 1942 during the plowing of a field and was removed. Details of the discovery remained uncertain as it took place in wartime. The ancient objects were cleaned and then displayed in the local house.

The silverware was used as daily utensils and the Great Dish, was used on special occasions by the family.

The hoard was declared to the authorities in 1946 after a knowledgeable friend had seen them. An inquest legally declared the find as a “treasure trove,” and the British Museum acquired it.

The two discovers of the Treasure Trove were awarded £1000 each as finders, although not necessarily the full ex gratia reward since the find had not been correctly reported.

The famous British author, Roald Dahl, wrote a partly-fictional account of the events surrounding the actual finding. Dahl’s version of events, (hear audiobook below) has since been confirmed by one of the discover’s grandsons.

The book claims that the discoverer was fully aware of the significance of the find. However, he could not bear to part with the treasure.

He kept it and restored it in secret, but an unexpected visitor saw two of the spoons left out on display, and the secret of the treasure was revealed.

The Great Dish of the Mildenhall Treasure

The Great Dish is an outstanding piece of the treasure with decorations, which were worked by chasing from the front in three concentric zones. The design is traditionally pagan and is expertly executed.

In the center is the head of a marine deity, probably Oceanus, the personification of the ocean. He is shown with a beard made of seaweed and dolphins emerging from his hair.

This portrait is surrounded by a narrow inner frieze of decoration populated by sea-nymphs, tritons, and other mythical and natural sea-creatures.

The outermost zone carries imagery of the Bacchic festival with its ecstatic retinue. Depicted are revelers who are dancing, making music, and drinking with the god Bacchus.

The triumph of Bacchus over Hercules is also depicted in which Hercules is shown staggering drunkenly while being supported by two satyrs.

Bacchus appears with his panther and Silenus at the top of Oceanus’s head, so that he is seen upside-down at the top of the picture.

The god Pan is dancing and brandishing his pan-pipes, as do several dancing female devotees of Bacchus. 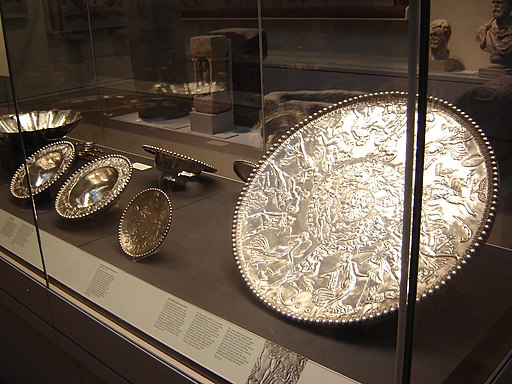 Platters and Dishes of the Mildenhall Treasure

One of a pair of silver dishes from the Mildenhall Treasure is decorated with figures of Pan, a nymph, and other mythological creatures.

Two small plates are decorated in precisely the same style as the Great Dish. One shows the god Pan, playing his pipes, and a maenad playing the double flute, and the other shows a dancing satyr with a dancing maenad.

Another large, flat serving platter is almost as big as the Great Dish. Still, it is decorated in a very different style, consisting of linear geometric decorations inlaid with contrasting black niello to form a wide rim border and a circular central panel. 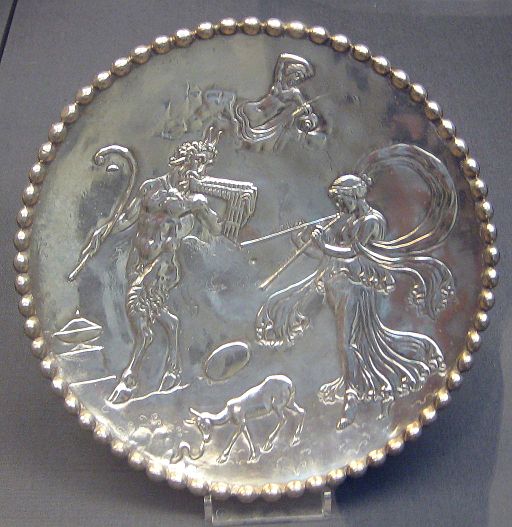 A Treasure Trove, also often known as a Hoard, is an amount of money or coin, gold, silver, or bullion found hidden, where the treasure is old enough for it to be presumed that the true owner is dead and the heirs undiscoverable.

The legal definition of what constitutes treasure trove and its treatment under law vary greatly from country to country and from era to era. The term is also often used metaphorically.

In the United States, the law of treasure trove varies from state to state. In general, for a find to be a treasure trove, an object must be of gold, silver, or paper money. Coins and tokens in metals other than gold or silver may also be included.

The object must have been concealed for long enough, so it is unlikely that the true owner will reappear to claim it.

In the United Kingdom, the old treasure trove regimes were replaced by the Treasure Act 1996. Any treasure found, belongs to the Crown, subject to any prior interests or rights held by any franchisee of the Crown.

The Secretary of State is then required to determine whether the museum should pay a reward before the transfer to the finder(s) of the treasure, the occupier of the land, or any person who had an interest in the land.

Exploring the Collections of the British Museum

“Every new beginning comes from some other beginning’s end.”
– Seneca, the Elder