The Minoan Bull-Leaper is a bronze sculpture of a bull and leaper from 1600 – 1450 BC Crete. It is the only surviving largely complete three-dimensional sculpture depicting Minoan bull-leaping.

Although bull-leaping certainly took place in Crete at this time, the leap depicted is practically impossible, and it has therefore been speculated that the sculpture may be symbolic of a Minoan Bull Acrobatics ceremony.

The bronze was cast in a single mold using the lost-wax casting technique. The group’s unity was demonstrated by analyzing the composition of the bronze of bull and leaper.

Stylistically, the group is coherent, since the arched back of the leaper mirrors the flying gallop posture of the bull.

Bull leaping and bulls were an essential part of the Minoan culture. Excavations at Knossos have revealed several frescos depicting bull-leaping.

The bulls may have had some religious significance, and the exaggerated size of the bull may indicate the Minoan reverence for the power of the animals.

The bull-leaping iconography o the Minoan art was the basis for the reconstruction of the mechanics of the leap:

These steps have become part of bull-leaping in the popular imagination; however, few Minoan depictions show exactly this technic. The majority show the leaper diving over the bull’s horns onto the back.

The Bull-Leaping Fresco from Knossos Place, which is now at the Heraklion Archaeological Museum, is one of a few surviving depictions of the act of jumping over bulls.

The bull is shown in what is called the “Mycenaean Flying Leap,” which means it is in a full gallop as in this bronze sculpture. The fresco also shows the bull’s body in an elongated form with extended legs to indicate movement.

The fresco composition may not show a chronological sequence, as the individuals are all different. Instead, the figures may be disconnected in time and space. They may have been superimposed to provide an overall impression of a scene. 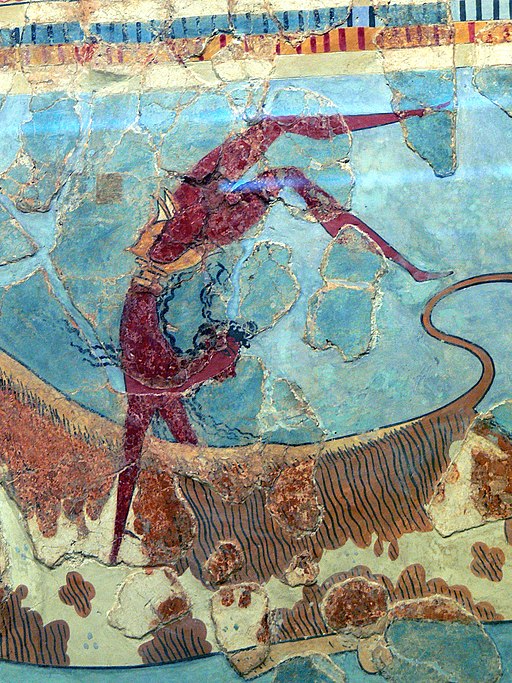 It is possible to leap over small bulls without touching them, even as they charge, and such spectacles still practiced in France may be the ultimate source of the sculpture.

Bull-leaping is a form of non-violent bull fighting based on an ancient ritual involving an acrobat leaping over the back of a charging bull.

The sport survives in modern France, usually with cows rather than bulls, in Spain, with bulls, and in Tamil Nadu, India with bulls.

Ritual leaping over bulls is a motif of Middle Bronze Age figurative art, notably of Minoan Crete, but also found in Hittite Anatolia, the Levant, Bactria, and the Indus Valley.

It is often interpreted as a depiction of a rite performed in connection with bull worship. Bull-leaping is thought to have been a key ritual in the religion of the Minoan civilization in Bronze Age Crete.

Representation of the Bull at the palace of Knossos is a widespread symbol in the art and decoration of this archaeological site.

The survival of bull sports into classical and modern times may offer clues from festival events similar to bull-dogging. 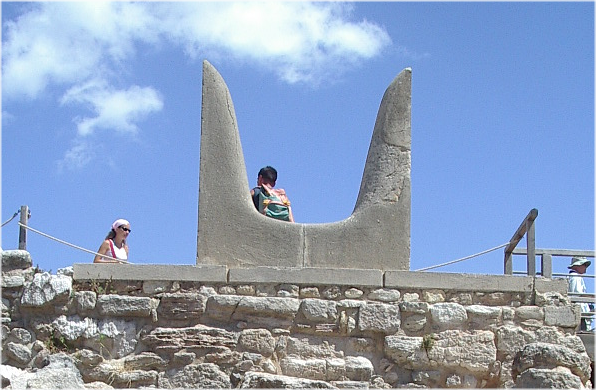 The Jaw-Dropping Art of Bull-Leaping

The origins of the Minotaur

“Minoan Civilisation is the first link in the European Chain.”
– Will Durant