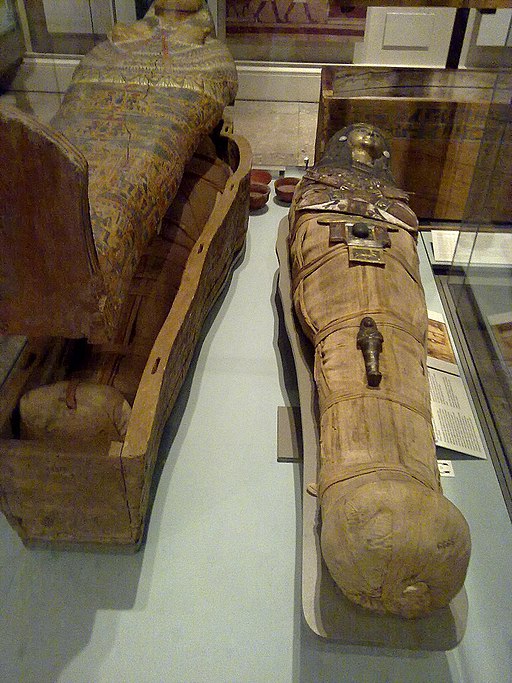 The “Mummy of Katebet” is that of a woman who was a Chantress of Amun. As a Chantress to a major ancient Egyptian deity, she would have sung and performed music during the rituals that were performed in the temples of Thebes in Ancient Egypt.

Her body was preserved and wrapped within layers of linen about 1320 -1280 BC. The painted cartonnage mummy-mask covering her head has a gilded face.

Katebet’s mummy-mask shows her wearing an elaborate wig and white earrings made from studs of calcite. Her wooden hands are depicted as crossed around her chest, wearing rings and jewelry.

Further down her mummy coverings is a small dark scarab beetle, which provided her magical protection when the gods judged her.

A small statue in the form of a mummy, which is called a shabti, is placed further down her mummy wrappings.

A Shabti was placed in tombs or with mummies and were intended to act as servants for the deceased and to do the manual labor in the afterlife.

The Shabti figurines frequently carried a hoe on their shoulder and a basket on their backs, implying they were intended to farm for the deceased.

A modern CAT scan of the Mummy of Katebet has revealed that she was elderly when she died, with only two remaining teeth. Her spinal column shows well-marked arthritic changes.  On the left ring-finger is a ring with a rectangular bezel.

This mummy was found in the wooden coffin, which has painted detail on plaster.

The ancient Egyptians had an elaborate set of funerary practices that they believed were necessary to ensure their immortality in the afterlife.

These rituals and protocols included mummifying the body, casting magic spells, and burial with specific grave goods thought to be needed after death.

The preservation of a dead body was critical if the deceased wanted a chance at acceptance into the afterlife.

To live for all eternity, the body of the deceased had to be preserved by the process of mummification. Mummification was required so that the soul could reunite with it and take pleasure in the afterlife.

After death, the embalmers received the body and, in a systematized manner, prepared it for mummification.

The primary process of mummification was preserving the body by dehydrating it using a combination of baking soda and salt. The body was drained of any liquids and left with the skin, hair, and muscles preserved.

The body of a person of high rank would have had the internal organs removed. The organs had been would be packed with wood shavings.

The skin was coated in resin, and then the body was wrapped in strips of linen. It was then placed in a coffin for its journey to the afterlife.

Katebet was a Chantress of the god Amun. Amun, also Amon and in Ancient Greek “Hámmōn,” was a primary ancient Egyptian deity. Amun, during the 21st century BC, rose to the position of patron deity of Thebes.

After the rebellion of Thebes against the Hyksos, Amun acquired national importance, expressed in his fusion with the Sun god, Ra, as Amun-Ra or Amun-Re.

Amun-Ra retained chief importance in the Egyptian pantheon throughout most of the New Kingdom.

Amun-Ra was the champion of the poor or troubled and central to personal piety.  His position as King of Gods developed to the point of virtual monotheism where other gods became manifestations of him.

Together with Osiris, Amun-Ra is the most widely recorded of the Egyptian gods.

As the chief deity of the Egyptian Empire, Amun-Ra also came to be worshipped outside Egypt, according to the testimony of ancient Greek historiographers in Libya and Nubia.

As Zeus Ammon, he came to be identified with Zeus in Greece.

Mummification (How an Ancient Egyptian Mummy was Made)

“For every joy, there is a price to be paid.”
– Egyptian Proverb