The Portland Vase is a Roman cameo glass vase that is about 2,000 years old. The work in creating the Portland Vase must have taken its original artisan about two years to produce. A skilled gem-cutter performed the intricate cuttings to depict the detailed scenes.

It is made of violet-blue glass and surrounded with a single continuous white glass cameo with two different scenes. The famous vase depicts seven human figures, a snake, and two bearded and horned heads below the handles, which mark the breaks between the two scenes.

The bottom of the vase is a cameo glass disc, also in blue and white, showing a head, presumed to be of Paris based on his Phrygian cap.

This method required an elongated bubble of glass being partially dipped into a crucible of white glass before the two were blown together. After cooling, the white layer was cut away to form the design. 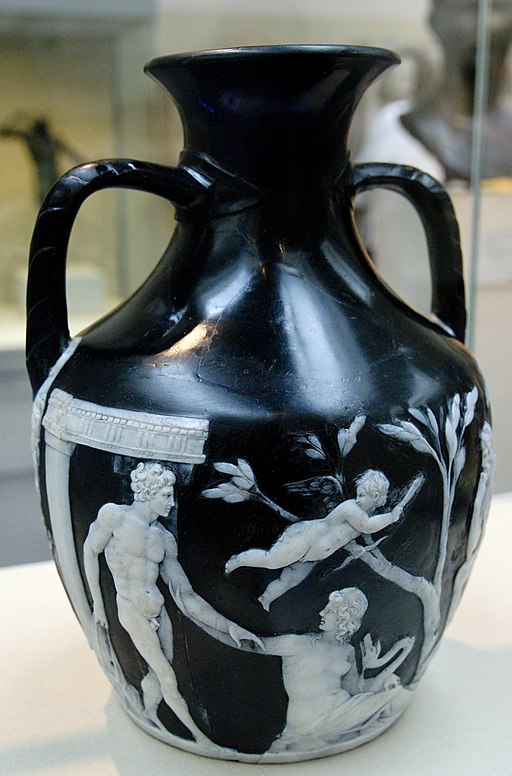 History of the Portland Vase

The first historical reference to the vase is in a letter of 1601 from a French scholar, where it is recorded as belonging to the collection of Cardinal Francesco Maria Del Monte in Italy.

In 1626 it passed into the Barberini family collection, where it remained for some two hundred years, becoming one of the treasures of Pope Urban VIII (1623–1644).

In about 1780, the British ambassador in Naples bought the vase, and it was later sold to dowager Duchess of Portland and then her son, the Duke of Portland.

The Duke lent the original vase to Josiah Wedgwood and then to the British Museum for safe-keeping, by which point it was known as the “Portland Vase.” It has remained in the British Museum ever since 1810 and was purchased by the museum in 1945.

Wedgwood copies of the Portland Vase

Josiah Wedgwood devoted four years of painstaking trials to duplicate the quality of the vase. It was eventually replicated not in glass but black and white jasperware.

Wedgwood finally managed to perfect it in 1790, with the issue of the “first edition” of copies, and it marked his final significant achievement.

Wedgwood copies can be found at the Victoria and Albert Museum, Fitzwilliam Museum, the Indianapolis Museum of Art, and the British Museum.

The Wedgwood Museum contains a display describing the trials of replicating the vase, and several examples of the early experiments. 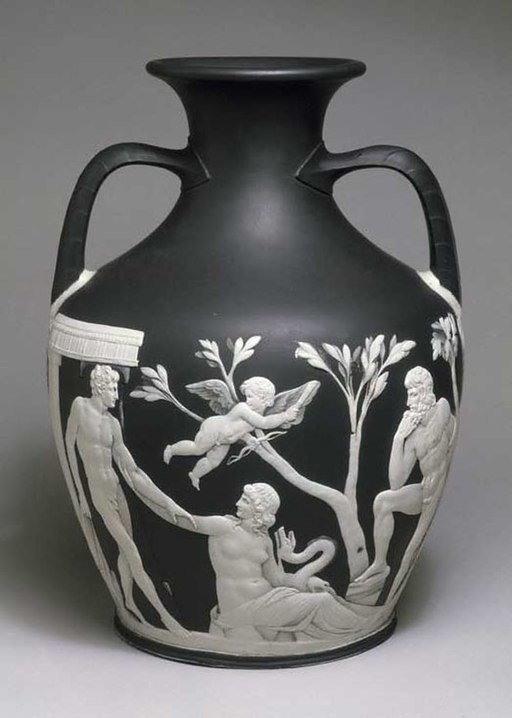 Vandalism of the Portland Vase

In 1845, the vase was shattered by an individual who threw a nearby sculpture on top of the case, smashing the vase. He was arrested, charged, and prisoned until the fine was paid.

The vase was pieced back together in 1845 by a British Museum restorer, though he was unable to place thirty-seven small fragments. The remaining pieces were put into a box and were forgotten until rediscovered later.

In 1948, the restoration appeared aged, and it was decided to restore the vase again. It was dismantled by the conservator and reconstructed by replacing three of the 37 loose fragments.

By the late 1980s, the adhesive was again yellowing and brittle, and another reconstruction was performed between 1988 and 1989 using epoxy resin with improved aging properties.

Reassembly revealed some fragments had been filed down during the previous restorations, which complicated the process. All but a few small pieces were integrated. Any gaps were filled with blue or white resin.

Little sign of the actual damage is visible today, and the vase should not require significant conservation work for at least another century.

The Iconography of the Portland Vase

The meaning of the images on the vase is unclear, and many theories and suggestions have been made. The images and their meaning fall into two main groups: mythological and historical.

Historical interpretations focus on Augustus, his family, and his rivals. Interpretations of the portrayals have included that of a marine setting and a marriage theme, as the vase may have been a wedding gift.

The most enduring mythological interpretation includes the marriage of the sea-gods Peleus and Thetis for the scene with the snake. For the second scene, with the woman under the tree, some suggest the image may represent Ariadne languishing on Naxos.

The Portland Vase – An Enigma in Glass

“Life can only be understood backwards, but it must be lived forwards.”
– Soren Kierkegaard