Ram in a Thicket – from Ur

This statue of a “Ram in a Thicket” is one of pair of figures excavated at the site of Ancient Ur, in southern Iraq, and which date back to about 2600 BC.

This one is exhibited at the British Museum in London, and the other is at the University of Pennsylvania Museum in Philadelphia.

The figures represent a large goat standing upright with its front hooves resting on the branches of a small tree. It is thought that the two figures were created to face each other.

Also, the tubes going up from their shoulders were used to support a bowl or similar object.

The sculpture had a wooden core that had been finely carved for the face and legs. The ram’s head and legs are layered in gold leaf, which had been hammered against the wood and stuck to it with a thin layer of bitumen.

The ears are copper, which are now green due to the natural tarnish. The horns and the fleece on its shoulders are of lapis lazuli, and the body’s fleece is made of shell, attached to a thicker coat of bitumen.

The figure’s genitals are gold, while its belly was a silver plate, now oxidized beyond restoration.

The tree is also covered in gold leaf with gold flowers. The figure stands on a small rectangular base decorated with a mosaic of shell, red limestone, and lapis lazuli.

The figure was initially attached to the flowering shrub by silver chains around its fetlocks, but these chains have entirely eroded.

Discovery of the Rams in a Thicket

The pair of rams or goats, and were discovered lying close together in the ‘Great Death Pit,’ one of the graves in the Royal Cemetery at Ur, by archaeologist Leonard Woolley during the 1928–9 excavation.

Woolley was in charge of the joint venture between the British Museum and the University of Pennsylvania, and which began in 1922.

As the workmen were digging in one corner of the ‘Great death pit,’ they uncovered an object made of gold and lapis lazuli. What they had discovered had been crushed flat by the collapse of the tomb.

The ravages of four thousand years caused the decay of the wooden frame. The excavators looked for hollows in the ground created by decayed objects and then filled them with plaster or wax to record the shape of the objects that had once filled them.

Woolley used this wax process to keep the pieces together as it was excavated, and the figure was gently pressed back into its original shape.

Woolley named the figure the ‘Ram in a Thicket’ after the passage in Genesis, where God orders the Biblical Patriarch Abraham to sacrifice his son Isaac, but, at the last moment Jehovah’s Angel stopped Abraham saying to him

“Do not harm the boy and do not do anything at all to him, for now, I do know that you are God-fearing because you have not withheld your son, your only one, from me. At that, Abraham looked up and saw just beyond him a ram caught in a thicket by his horns. And Abraham went and took the ram and offered him up for a burnt offering instead of his son”.

Charles Leonard Woolley (1880 – 1960) was a British archaeologist best known for his excavations at Ur.

He is recognized as one of the first “modern” archaeologists who excavated systematically, keeping careful records. Woolley was knighted for his contributions to the discipline of archaeology. 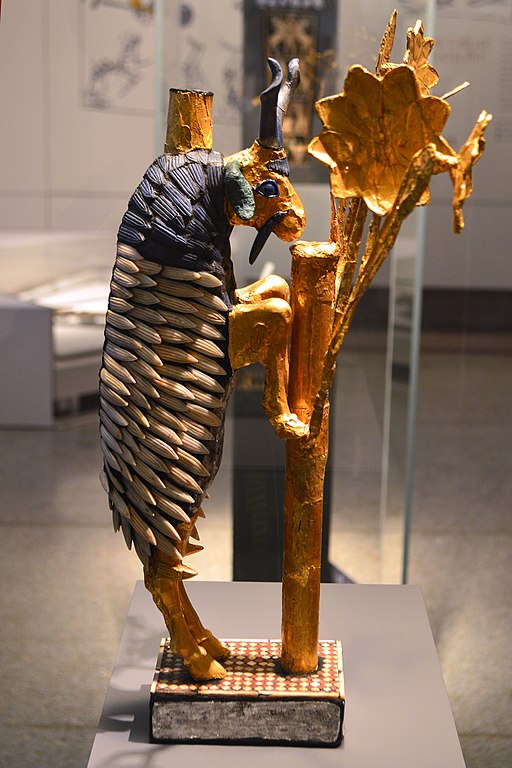 Woolley led a joint expedition to Ur, beginning in 1922 to explore the burial site of many Sumerian royals. His archaeological team made essential discoveries of significant historical importance.

Ram in a Thicket

”Ram Caught in a Thicket”

Treasures From The Royal Tombs of Ur

Ram Caught in a Thicket from Ur

“Wearing a long beard like a goat.”
– Sumerian Proverb