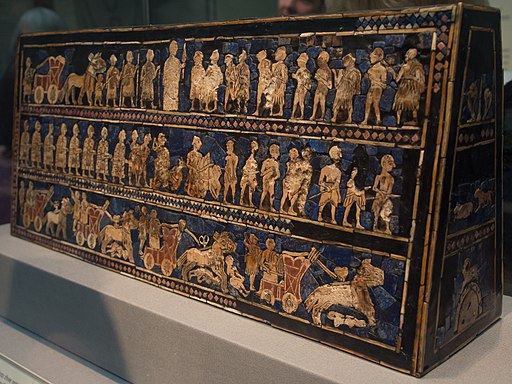 The Standard of Ur is a mosaic of shells, red limestone and lapis lazuli inlaid over a hollow wooden box. It was discovered in the 1920s in a royal tomb at the ancient city of Ur (modern-day Iraq) and is about 4,600 years old.

The standard was constructed to depict scenes of “War” on one side and “Peace” on the other side using elaborately inlaid mosaics. It was next to the skeleton of a ritually sacrificed man who may have been its bearer. However, its original real purpose remains enigmatic.

The present form of this “Standard of Ur” is a reconstruction, presenting the best guess of its original appearance. The inlaid mosaic panels cover each long side of the Standard.

Each side offers a series of scenes displayed in three registers, upper, middle, and bottom.

The two mosaics have been dubbed “War” and “Peace” for their subject matter, respectively, a representation of a military campaign and scenes from a banquet. The panels at each end showed fantastical animals.

The mosaic scenes of “War” are the earliest representations of a Sumerian army, engaged in a battle and its aftermath.

The “War” panel shows the king in the middle of the top register, standing taller than any other figure. He stands in front of his bodyguard and a four-wheeled chariot.

He faces a row of prisoners, all of whom are portrayed as naked, bound, and injured with large, bleeding gashes on their chests and thighs.

Standard of Ur -“War” Panel

The “Peace” mosaics portray a banquet scene. The king again appears in the upper register, sitting on a carved stool, and he is faced by six other seated participants, each holding a cup raised in his right hand.

They are attended by various other figures, including a singer, who accompanies a lyrist. In the middle register, bald figures wearing skirts with fringes parade animals, fish, and other goods, perhaps bringing them to the feast.

The bottom register shows a series of figures dressed differently from those above, carrying produce in shoulder bags and backpacks.

The Discovery of the Standard of Ur

The “Standard of Ur” was found in one of the largest royal tombs in Ur, associated with a king who died around 2550 BC.

Sir Leonard Woolley’s excavations in Mesopotamia in 1927–28 uncovered the Standard in the corner of a tomb chamber, lying close to the shoulder of a man who may have held it on a pole. Robbers, in ancient times, had thoroughly plundered the tomb in which it was found.

As one corner of the last chamber as it was being cleared, a workman accidentally spotted a piece of shell inlay, and from this starting point, the remains of the Standard were slowly revealed and reconstructed.

Standard of Ur – “Peace” Panel

The Standard of Ur survived in only a fragmentary condition. The ravages of four thousand years caused the decay of the wooden frame and bitumen, which had cemented the mosaics in place.

The tomb’s collapse crushed the object, fragmenting it, which made excavating the Standard a challenging task.

The excavators looked for hollows in the ground created by decayed objects and then filled them with plaster or wax to record the shape of the objects that had once filled them.

When the excavators discovered the remains of the Standard, they found that the mosaic pieces had kept their form in the soil, while their wooden frame had disintegrated.

They carefully uncovered small sections measuring about 3 square centimeters and covered them with wax, enabling the mosaics to be lifted while maintaining their original designs.

Charles Leonard Woolley (1880 – 1960) was a British archaeologist best known for his excavations at Ur. He is recognized as one of the first “modern” archaeologists who excavated systematically, keeping careful records.

Woolley was knighted for his contributions to the discipline of archaeology.

Woolley led a joint expedition to Ur, beginning in 1922 to explore the burial site of many Sumerian royals. His archaeological expedition made essential discoveries of significant historical importance.

“When digging ceases to be a great game and becomes, as in Egypt, merely a business, it will be a bad thing.”
– Leonard Woolley