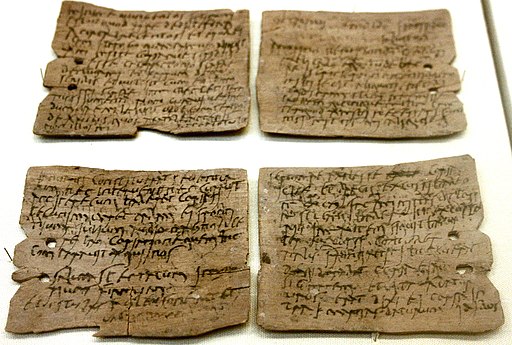 The Vindolanda Tablets were, at the time of their discovery, the oldest surviving handwritten documents in Britain. The tablets date to the 1st and 2nd centuries AD during the Roman occupation of Britain.

The tablets are thin, postcard-sized wooden leaf-tablets with carbon-based ink. They were discovered in 1973, at the site of Vindolanda, a Roman fort in northern England. The Vindolanda Tablets were the first known surviving examples of the use of ink letters in the Roman period.

The tablets are made from birch, alder, and oak that grew locally. They are 0.25–3 mm thick with a typical size of a modern postcard. They were scored down the middle and folded to form diptychs with ink writing on the inner faces, the ink being carbon, gum Arabic, and water.

The written documents are a rich source of information about life on the northern frontier of Roman Britain. The documents record military matters as well as personal messages to and from the garrison staff of Vindolanda.

Highlights of the tablets include an invitation to a birthday party held in about 100 AD, which is the oldest surviving document written in Latin by a woman.

Example of the old Roman cursive script from the Vindolanda tablets

When the Vindolanda Tablets were first discovered in 1973, they were assumed to be wood shavings until one of the excavators found two stuck together. On peeled the two layers apart, they found that there was writing on the inside.

The rapid oxygenation of the wood meant that the initial discoveries were soon black and unreadable. They were sent off for multi-spectrum photography, which led to infra-red photographs showing the scripts for the first time.

The scripts, however, were undecipherable. An academic analysis of the previously unknown cursive script eventually produced transcriptions. The texts of 752 tablets had been transcribed, translated, and published. 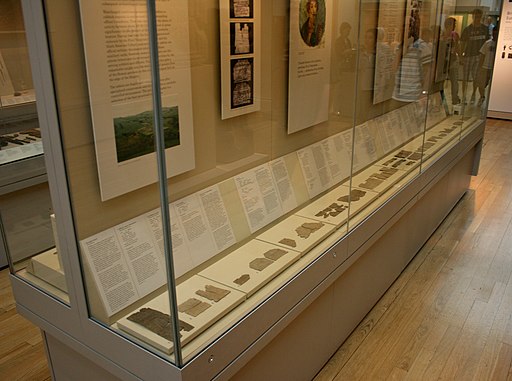 Vindolanda tablets in the British Museum

The Vindolanda fort was first constructed before the construction of Hadrian’s Wall, and most of the tablets are slightly older than the Wall, which was begun in 122 AD.

Vindolanda was a Roman auxiliary fort (castrum) just south of Hadrian’s Wall in northern England. Archaeological excavations show it was under Roman occupation from about 85 AD to 370 AD.

Located near the modern village of Bardon Mill in Northumberland, it guarded the Stonegate, the Roman road from the River Tyne to the Solway Firth.

The Vindolanda site museum conserves and displays archeological find from the site. Exhibits include Roman boots, shoes, armor, jewelry and coins, and a selection of the tablets.

The majority of the Vindolanda Tablets are held at the British Museum, where a selection of them is on display in its Roman Britain gallery.

Vindolanda Tablets at the British Museum

Exploring the Collections of the British Museum

We went to VINDOLANDA and this is what we found

“Every new beginning comes from some other beginning’s end.”
– Seneca, the Elder