This Wolverine Pendant is a bone pendant decorated with an engraved drawing of a wolverine from the cave of Les Eyzies, Dordogne, France.

The pendant has an engraving with a relatively deep-cut outline of a wolverine featuring a distinctive bear-like face, pointed nose, small ears, substantial body, and hairy paws.

Delicate internal shading indicates the distinctive markings of the fur. The wolverine appears to be walking or running.

The diagonal line across the animal’s shoulder may represent a spear or dart. The pendant is broken, and the missing piece may have shown another figure.

There is a hole at one end to enable it to be worn on a string, or it may have been suspended on posts or ceremonial accouterments.

The Wolverine was no longer widespread, at the time of the last Ice Age as the wolverine was a competitor with humans for food sources.

The Wolverine was a muscular carnivore, more closely resembling a small bear, and was valued as a useful source of fur, as the fur is naturally resistant to frost.

The pendant is from the late Magdalenian period and around 12,500 years old. It is made from a shaped bone, about 1.5 mm thick with both sides are smoothed flat.

Wolverine Pendant is attributed to Grotte des Eyzies, although this is not fully documented. It was exhibited at the Exposition Universelle in Paris in 1867, where it was described with other pieces as coming from caves in the Dordogne.

Of the sites known at this time, the characteristics of the engraved drawing suggest Grotte des Eyzies was the most likely findspot.

The caves in the Dordogne’s Vézère valley contain some of the oldest artworks known to humanity. 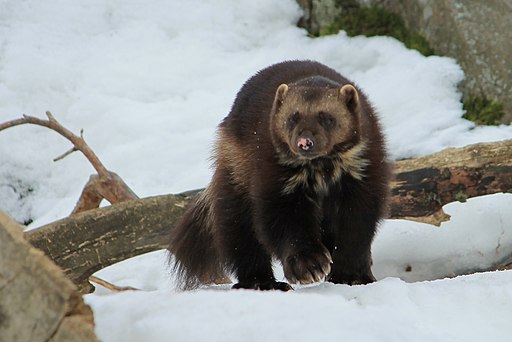 Wolverine at the Helsinki Zoo

The wolverine is a stocky and muscular carnivore, more closely resembling a small bear than other mustelids. It has a ferocity and strength out of proportion to its size, with the ability to kill prey many times larger than itself.

The wolverine is found primarily in remote reaches of the Northern boreal forests and subarctic and alpine tundra of the Northern Hemisphere, with the most significant numbers in Northern Canada, Alaska, the Nordic countries, western Russia and Siberia.

Its population has steadily declined since the 19th century due to trapping, range reduction, and habitat fragmentation.

The English word wolverine is an alteration of the earlier form, wolvering, which probably implies “a little wolf.” 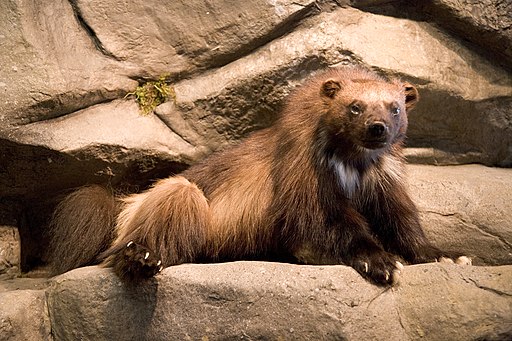 The Wolverine Pendant was created by peoples from the Magdalenian cultures, which are cultures of the Upper Paleolithic and Mesolithic in western Europe. They date from around 17,000 to 12,000 years ago.

It is named after the type site of La Madeleine, a rock shelter located in the Vézère valley, the commune of Tursac, in France.

The Magdalenian epoch is associated with reindeer hunters. However, Magdalenian sites contain extensive evidence for the hunting of red deer, horses, and other large mammals present in Europe toward the end of the last ice age.

The culture was geographically widespread, and later Magdalenian sites stretched from Portugal in the west to Poland in the east.

The Upper Paleolithic or Late Stone Age dates to between 50,000 and 10,000 years ago, marked by the appearance of behavioral modernity in early modern humans.

This period includes the process of expansion of modern humans from Africa throughout Asia and Eurasia, which contributed to the extinction of the Neanderthals.

The Upper Paleolithic has the earliest known evidence of organized settlements in the form of campsites, some with storage pits.

Prehistoric Caves of the Vézère Valley

The Prehistoric Sites and Decorated Caves of the Vézère Valley include 15 prehistoric sites mostly in and around Les Eyzies-de-Tayac-Sireuil, which has been called the “Capital of Prehistory.”

This valley is exceptionally rich in prehistoric sites, with more than 150 known sites including 25 decorated caves, and has played an essential role in the study of the paleolithic and its art.

Three of the sites are the namesakes for prehistoric periods:

The Cro-Magnon rock shelter gave its name to the Cro-Magnon, the generic name for the European early modern humans. Many of the sites were discovered or first recognized as significant in the early twentieth century, while Lascaux, which has the most exceptional rock art of these, was found in 1940.

Some of the sites have small museums or displays showcasing some of the archaeological finds made there. The region also has three main visitor centers the National Museum of Prehistory and the International Pole of Prehistory in Les Eyzies and Lascaux IV in Montignac.