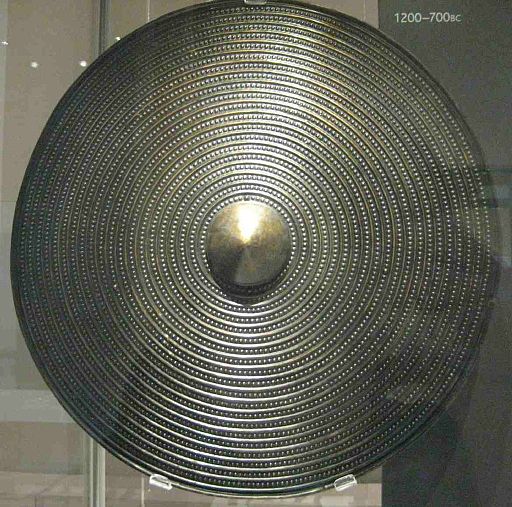 Yetholm-type shields represent a distinctive type of shield dating from 1200 – 800 BC. The modern type-naming comes from Yetholm in southern Scotland, where several shields of this type were discovered in a peat bog.

The Yetholm peat bog yielded three examples of his type of Bronze Age Shield. In total twenty-one, examples have been found in Britain and Ireland, plus one in Denmark.

Some of these finds are fragmentary and damaged, and the shields vary significantly in size but are otherwise similar in their design and pattern. The impressive artistry and quality of the shields would have indicated high social status.

The shields are made of a high-tin bronze sheet about 0.6 mm thick. They are round with a central domed boss created by hammering out from the back.

The shield face is covered in raised ridges in concentric rings, each a couple of millimeters high. Between the ridges are rings of small hemispherical bosses about 4 mm across. The decoration was formed by hammering from the reverse, which is called Repoussé.

The outer edge of the shield has been folded back and hammered down to form a durable rim. A handle is riveted across the open bowl of the boss, made from a thicker piece of sheet bronze folded over.

There is also attached a pair of metal tabs for a carrying strap. Rivet heads are on the front for fitting attachments but are similar to the decorative raised bosses and are not obvious.

As the craftsman came to complete a ring, the spacing changed slightly to ensure an even design and make the starting place inconspicuous.

The shields show a high degree of accomplishment and, given the degree of similarity, it is likely that all were made in the same workshop by a few craftsmen.

The shields vary in size and the number of embossed rings, but the size of the embossed features are consistent.

With one exception, all the surviving shields were found in wet contexts, suggesting they were part of a widespread practice of placing valuable objects in wet places such as bogs and rivers.

Presumably, this practice was motivated by religious beliefs, the details of which are unknown, although other ancient cultures such as the Celts had similar practices.

Rock carvings from this period made in Southern Scandinavia include depictions of shields decorated with concentric rings or rings of dots. The artist could not show the fine detail of a Yetholm-type shield, but the similarity is striking. 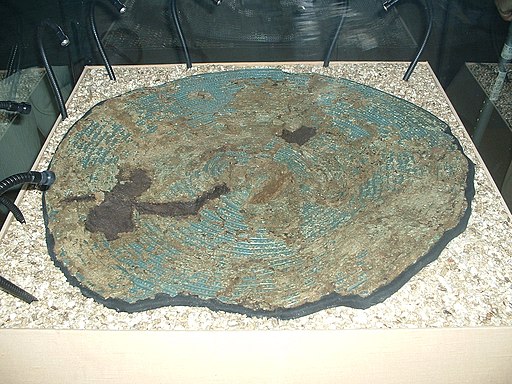 Bronze Age Britain is an era that spanned from c. 2500 until c. 800 BC. It lasted about 1,700 years, and was marked by the use of copper and then bronze by the prehistoric Britons.

During the British Bronze Age, significant megalithic monuments similar to those from the Late Neolithic continued to be constructed or modified.

From around 2150 BC, smiths had discovered how to make bronze, which is much harder than copper by mixing copper with a small amount of tin.

Over the next thousand years, bronze gradually replaced stone as the primary material for tool and weapon making.

The bronze axehead, made by casting, was at first similar to its stone predecessors but then developed a socket for the wooden handle to fit into, and a small loop or ring to make lashing the two together easier.

Groups of unused axes are often found together, suggesting ritual deposits. However, it may reflect the status and power of elite groups that collected bronze items, restricting their use among the wider population.

Bronze swords of “leaf” shape, swelling gently from the handle before coming to a tip, have been found in considerable numbers, along with spearheads and arrow points.

Shields have varied dramatically in construction over time and place. Sometimes shields were made of metal, but wood or animal hide construction was much more common.

Many surviving examples of metal shields are generally felt to be ceremonial rather than practical, such as the Yetholm-type shields. 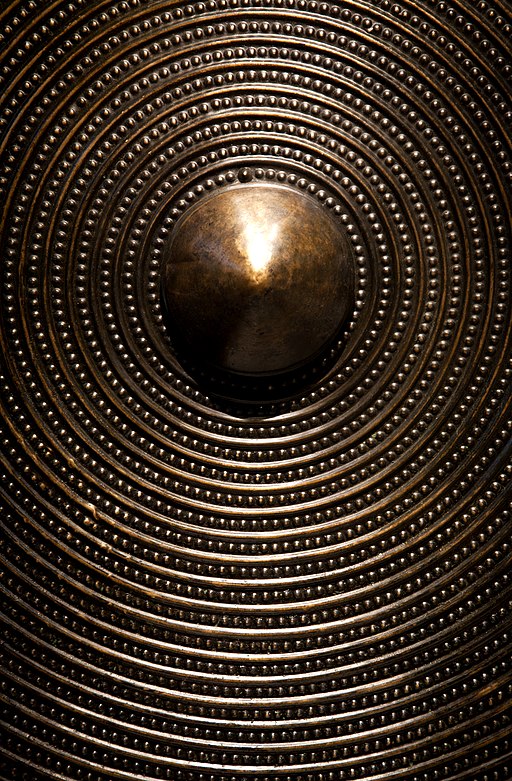 Prehistoric bronze shield found in the marsh at Rhyd-y-gors

The Rhyd-y-gors or Rhydygors marsh near Carmarthen in Southwest Wales is where one perfectly preserved Bronze Age British shield was discovered.

The shield would originally have been made of wicker, with the decorative bronze plating attached to the front. This shield is slightly more than two feet in diameter and is decorated with concentric circles and many small brass knobs.

What was the Bronze Age?

Life in a Bronze Age settlement