Charles Dickens and his wife Catherine Dickens, lived here, and their older two daughters, Mary and Kate, were born in this house.

Charles Dickens (1812 – 1870) was a famous and influential English writer and social critic. He created some of the world’s best-known fictional characters and is regarded as the most celebrated novelist of the Victorian era.

His works enjoyed popularity during his lifetime, and by the 20th-century scholars had recognized him as a literary genius. Despite his lack of formal education, he wrote 15 novels, five novellas, hundreds of short stories and non-fiction articles.

Dicken’s popularity was supported by lectures and performed readings. He was an untiring letter writer and campaigned vigorously for children’s rights, education, and other social reforms.

The Dining Room is located on the ground floor of Charles Dicken home. Its ideal position in the house and grand architecture of the house was ideal for launching Dickens socially.

This elegant room played a vital role as the rising author enjoyed his first flush of success. Dickens entertained many leading and influential Victorian figures in this room. 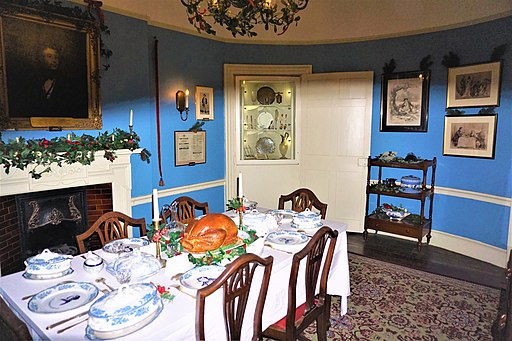 In 1836, after a one-year engagement, Dickens married Catherine Thomson Hogarth (1816–1879), the daughter of George Hogarth, editor of the Evening Chronicle. 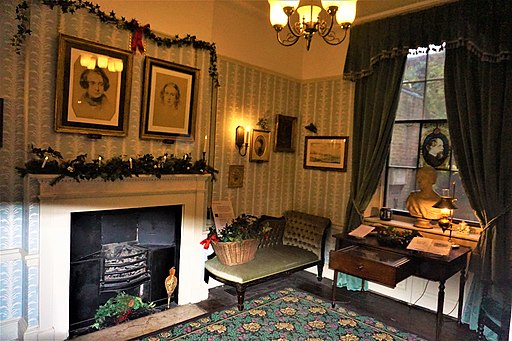 Catherine Dickens used this room to manage domestic and household matters. Mrs. Dickens spent time with her children, wrote letters, and welcomed visitors to this room.

Dickens spent much of his time traveling away from home, and they kept in touch with regular written correspondence. Many of their surviving letters demonstrate that their time in this house was a particularly happy time for the Dickens couple.

One year before they moved into this house, after a one-year engagement, in 1836, Dickens married Catherine Thomson Hogarth (1816–1879).

The Kitchen is located on the basement level, and this is where the servants prepared the family meals.

The kitchen was managed by the mistress of the house, Catherine Dickens, as traders and merchants came in and out with food supplies.

Victorian kitchens of the time were low-lit and filled with heat and smoke from the cooking fires.

These years were a happy period for the Dickens couple with two of their children born in this house. 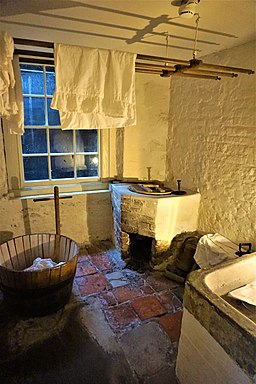 The washroom was used by the maids to wash and iron clothes for the household. This arrangement is a typical Victorian-era washhouse.

Dickens’s portrayal of servants was more sympathetic than most of his peers, and his views endeared him to the domestic staff around England at the time. 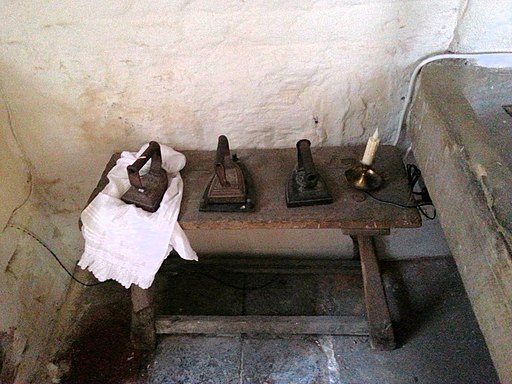 In 1836, after a one-year engagement, Dickens married Catherine Thomson Hogarth (1816–1879), the daughter of George Hogarth, editor of the Evening Chronicle.

This Blue Plaque is on the building located at 48 Doughty Street in Holborn, London. Which is also the location of the Charles Dickens Museum.

A blue plaque is a historical marker in the United Kingdom to commemorate a link between that location and a famous person or event.

The “official” scheme is administered by English Heritage and traces its origins to 1866 in London, on the initiative of the politician, to mark the homes and workplaces of famous people. It was the first such scheme in the world. It has provided the inspiration and model for many others across the globe.

The plaques erected are made in a variety of designs, shapes, materials, and colors: some are blue, others are not.

There are now many historical marker schemes throughout the world, such as those in leading cities in Europe, Australia, Canada, Russia, and the United States.

Charles John Huffam Dickens (1812 – 1870) was an English writer who created some of the world’s best-known fictional characters and one of the most celebrated novelists of the Victorian era.

His works enjoyed unprecedented popularity during his lifetime, and his novels and short stories are still widely read today.

“There are dark shadows on the earth, but its lights are stronger in the contrast.”

“Charity begins at home, and justice begins next door.”

“I never could have done what I have done without the habits of punctuality, order, and diligence, without the determination to concentrate on one subject at a time.”

“There is nothing in the world, so irresistibly contagious as laughter and good humor.” – A Christmas Carol

“No one is useless in this world who lightens the burdens of another.”

“Procrastination is the thief of time, collar him.” – David Copperfield

“Ask no questions, and you’ll be told no lies.” – Great Expectations

“There is prodigious strength in sorrow and despair.” – A Tale of Two Cities

“The most important thing in life is to stop saying ‘I wish’ and start saying ‘I will.’ Consider nothing impossible, then treat possibilities as probabilities.”

“It was the best of times, it was the worst of times.” – A Tale of Two Cities

About the Charles Dickens Museum, London

“It was the best of times, it was the worst of times.”
– Charles Dickens