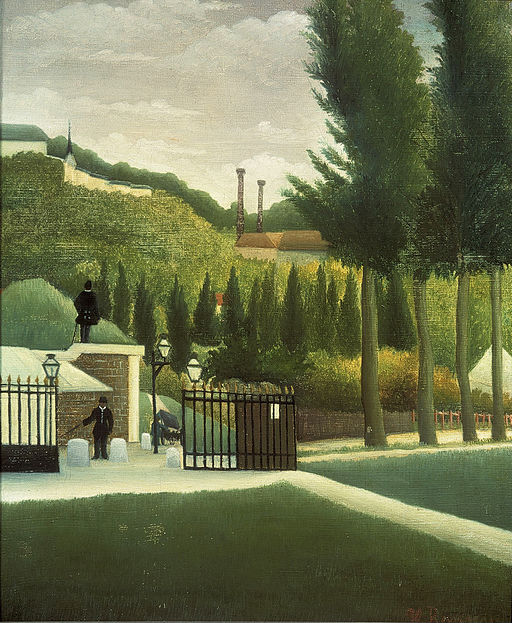 A wall surrounded Paris, and everyone entered the city through one of the gates.

In the late 1800s, there were 66 octroi gates into the city at the time, and about 2,000 officers were employed, Henri Rousseau was one of them. The citizens of Paris strongly disliked the octroi, but the government needed the money.

The old octroi buildings can still be seen in Paris today.

Rousseau was self-taught and developed a style that lacked traditional training, with its absence of strict proportions, a one-point perspective, and with the use of sharp, often unnatural colors.

Henri Rousseau was a French post-impressionist painter who started painting seriously in his early forties, and by age 49, he retired from his job to work on his art full-time.

His primary employment before he retired was as the customs officer or a toll and tax collector, which makes this painting relevant to his experience.

“Beauty is the promise of happiness ”

“If you remove these lines in the painting, the colors are no longer effective ”

“When I go out into the countryside and see the sun and the green and everything flowering, I say to myself, “Yes indeed, all that belongs to me!”

“I felt before, I thought.”

“What wisdom can you find that is greater than kindness. ”

“The happiest is the person who suffers the least pain; most miserable the ones who enjoy the least pleasure ”

“Nothing makes me so happy as to observe nature and to paint what I see.”
– Henri Rousseau