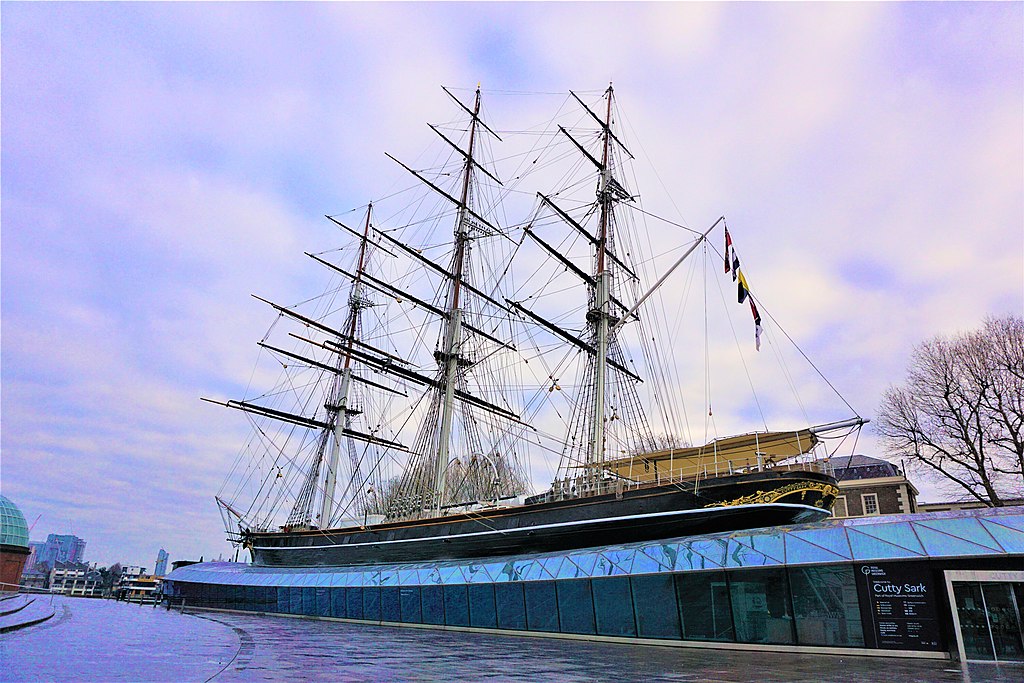 She was constructed at the end of a long period of clipper ship innovation and development, which halted as sailing ships gave way to steam propulsion.

The opening of the Suez Canal meant that steamships were now able to take a shorter route to China.

Thus the Cutty Sark spent only a few years on the tea trade before turning to the trade of wool from Australia, where she held the record time to Britain for ten years.

Improvements in steam technology meant that gradually steamships also came to dominate the longer sailing route to Australia, She was then sold to the Portuguese company Ferreira and Co. in 1895 and renamed Ferreira.

She continued as a cargo ship until purchased in 1922 by a retired sea captain, who used her as a training ship.

After his death, Cutty Sark was transferred to the Thames Nautical Training College, in 1938 where she became an auxiliary cadet training ship.

By 1954, she had ceased to be useful as a cadetship and was transferred to permanent dry dock at Greenwich, London, for public display.

Cutty Sark – the fastest ship of its day

A Cutty Sark visit is the opportunity to explore one of the world’s famous ships and only surviving tea clipper, and to discover 1800s life at sea.

Follow in the footsteps of those who sailed her, explore displays that evoke the sights, smells, and sounds of life at sea. Explore the underneath the ship’s gleaming hull and touch a piece of world history.

The Even Keel Café is situated directly underneath the ship’s hull, and the Cutty Sark shop is located at the entry and exit to the museum.

All our attractions are located within easy walking distance of each other within a Greenwich Heritage Site.

How Cutty Sark got its name

Greenwich has had associations with the sea and navigation since the landing for the Romans. Henry VIII lived here, and Charles II founded the Royal Observatory in 1675 for “finding the longitude of places.”

It is the home of Greenwich Mean Time and the Prime Meridian since 1884. Greenwich has long been a center for astronomical study, and navigators across the world have set their clocks according to its time of day.

Greenwich is an area of south-east London, England, located 5.5 miles (8.9 km) east-southeast of Charing Cross. Greenwich has given its name to the Greenwich Meridian (0° longitude) and Greenwich Mean Time.

The town of Greenwich became the site of a royal palace, the Palace of Placentia, from the 15th century. It was the birthplace of many Tudors, including Henry VIII and Elizabeth I.

The palace fell into disrepair during the English Civil War and was rebuilt as the Royal Naval Hospital for Sailors by Sir Christopher Wren.

These buildings became the Royal Naval College in 1873, and they remained an establishment for military education until 1998.

Royal Museums Greenwich is an organization comprising of four museums in Greenwich, London: the Royal Observatory, the National Maritime Museum, the Queen’s House, and the Cutty Sark.

The National Maritime Museum has essential holdings in the history of Britain at sea, comprising more than two million items.

Included in the collection are maritime art, cartography, manuscripts including official records, ship models and plans, scientific and navigational instruments, instruments for time-keeping, and astronomy.

Its holdings including paintings on Vice-Admiral Horatio Nelson and Captain James Cook.

The Queen’s House is a former royal residence built between 1616 and 1635 in Greenwich, a few miles down-river from the then City of London.

Its architect was Inigo Jones, for whom it was an early commission, for Anne of Denmark, the queen of King James I. The Queen’s House was the first classical building to have been constructed in England.

It was Jones’s first significant commission after returning from his 1613–1615 grand tour of Roman, Renaissance, and Palladian architecture in Italy.

Today the house forms part of the National Maritime Museum and is used to display portions of their substantial collection of maritime paintings and portraits.

The Royal Observatory, Greenwich is situated on a hill in Greenwich Park, overlooking the River Thames.

It has played a significant role in the history of astronomy and navigation and is best known for the prime meridian passes through it, and thereby gave its name to Greenwich Mean Time.

The observatory was commissioned in 1675 by King Charles II, and Sir Christopher Wren chose the site.