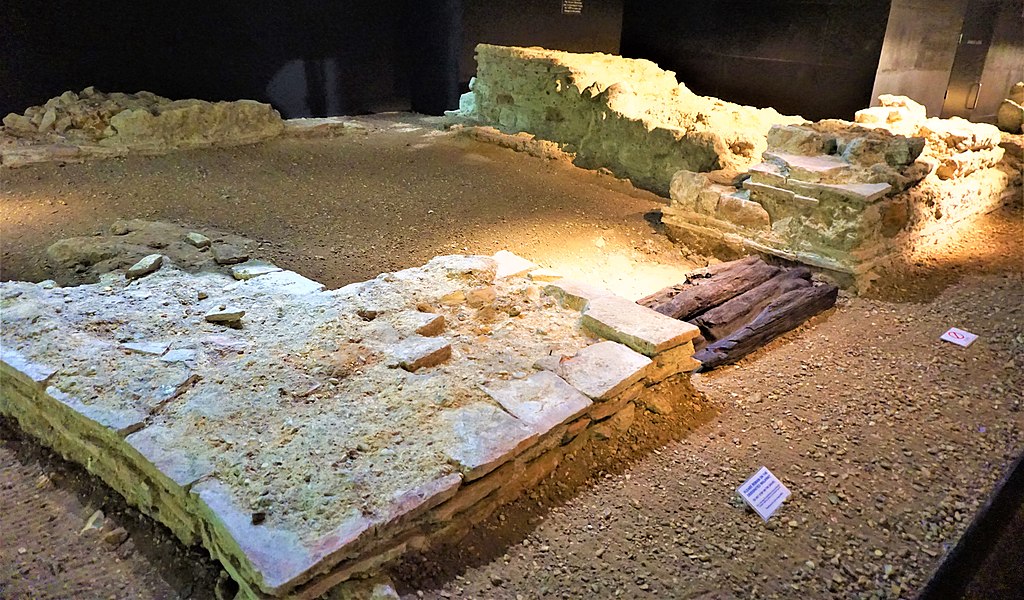 London’s Roman Amphitheatre is the visible remains of an amphitheater constructed during the Roman period London that lies beneath the Guildhall Art Gallery complex.

The ruins were discovered in 1988. They are displayed in its original place in a room in the basement of the Guildhall Art Gallery.

London’s first Roman amphitheater was built in 70 AD from wood but was renovated in the early in the 2nd century with tiled entrances and rag-stone walls.

The amphitheater was used for various public events such as gladiator games, entertaining soldiers, and the public with animal fighting and public execution of criminals, as well as religious activities.

When the ancient Romans left in the 4th century, the amphitheater lay derelict for hundreds of years. In the 11th century, the area was reoccupied, and by the 12th century, the first Guildhall was built on top of the ruins of London’s first Roman Amphitheatre.

There are only twelve known Roman amphitheaters in Britain. This amphitheater was built for the Roman provincial capital of Londinium and is one of the largest of the discovered amphitheaters.

This Amphitheatre provided the main focus of entertainment within the capital and one of the critical marks of civilized Roman life. It was located inside the latter walled defenses of Londinium and close to the main fort.

The archaeological remains, which are 8 meters (20 feet) below street level, have survived due to their waterlogged conditions that contributed to the preservation of timber and other usually perishable remains.

The excavations have provided valuable insights into structural details not usually preserved. The elliptical amphitheater was about 105m long and 85m wide, with a capacity of up to 6,000 people.

A Roman amphitheater was an open-air venue used for entertainment, performances, and sports. The term derives from the ancient Greek words meaning “around” and “place for viewing.”

Ancient Roman amphitheaters were oval or circular in plan, with seating tiers that surrounded the central performance area, like a modern open-air stadium.

Roman Amphitheatres were used for events such as gladiator combats, chariot races, animal hunts, and executions.

About 230 Roman amphitheaters have been found across the area of the Roman Empire.

Only five of Britain’s amphitheaters show a military connection by way of proximity to a fort, as does London’s Roman Amphitheatre. These amphitheaters would also have been used for military ceremonies and events.

Londinium was a settlement established on the current site of the City of London around  43 AD.

Its bridge over the River Thames turned the city into a road nexus and important port, serving as an important commercial center in Roman Britain until its abandonment during the 5th century.

Following its foundation in the mid-1st century, early Londinium housed a fortified garrison on one of its hills.

In the year 60 or 61, the rebellion under Boudicca forced the garrison to abandon the settlement, which was then razed. Following the Boudicca’s defeat, the city was rebuilt as a planned Roman town.

Between 190 and 225 AD, the Romans built a defensive wall around the landward side of the city. This wall was one of the most significant construction projects carried out in Roman Britain.

The London Wall survived for another 1,600 years and broadly defined the perimeter of the old City of London.