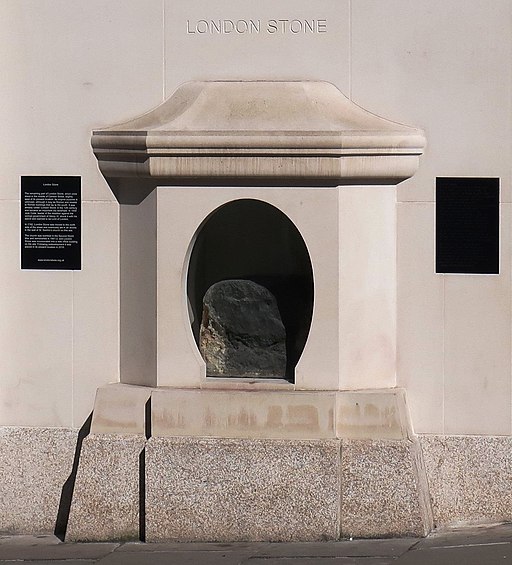 “London Stone” is a historic landmark initially located on the north side of Cannon Street, opposite Cannon Street station, in an aperture in the wall. It is an irregular block of limestone, the remnant of a once much more massive object that had stood for many centuries.

The name “London Stone” was first recorded around the year 1100. The date and original purpose of the Stone are unknown, although it is possibly of Roman origin.

The date on which “London Stone” was erected and its original function are unknown, although there has been much speculation since the medieval period. Modern claims that it was formerly an object of veneration, or has some occult significance, are unsubstantiated.

The present “London Stone” is only the upper portion of a once much larger object. The Stone is made from Clipsham Limestone from Rutland, which used to be transported to London for monuments and sculptures in early Roman London and in Saxon times.

The Stone was originally located on the south side of medieval Candlewick Street since widened to create modern Cannon Street opposite the west end of St Swithin’s Church.

It was shown in this position on the “Copperplate” map of London, dating to the 1550s. A London historian described it in 1598 as:

A French visitor to London in 1578 recorded that the Stone as a local landmark, even though the part standing above ground, was not unusually large.

The “London Stone” was a well-known landmark in medieval London. When in 1450 Jack Cade, leader of a rebellion against the corrupt government of Henry VI, entered the city with his men, he struck his sword on London Stone and claimed to be “Lord of this city.”

By the time of Queen Elizabeth I, “London Stone” was not merely a landmark, shown and named on maps, but a visitor attraction in its own right.

Tourists were told various stories such as that it had stood there since before the city existed, or that it had been set up by order of King Lud, the legendary rebuilder of London. Others claimed that it marked the center of the city of London, or that it was used for the tendering and making of payment by debtors.

It appears to have been routinely used in this period as a location for the posting and promulgation of a variety of bills, notices, and advertisements.

During the 17th century, the London Stone continued to be used as an “address” to identify a locality. For example, a biography of Queen Elizabeth I was accorded on its title page,

“printed by Iohn Beale, for Phillip Waterhouse; and are to be sold at his shop at St. Paul’s head, near London Stone.”

Over 30 books published between 1629 and the 1670s with similar references to “London Stone” in the imprint.

London Stone on temporary display at the Museum of London

“London Stone” was probably damaged and reduced in size, during the Great Fire of London which destroyed St Swithin’s church and the neighboring buildings. It was later covered with a small stone cupola to protect it.

By 1742 it was considered an obstruction to traffic, and the remaining part of the Stone was then moved. With its protective cupola, it was moved from the south side of the street to the north side, where it was first set beside the door of St Swithin’s Church, which had been rebuilt by Christopher Wren after its destruction in the Great Fire.

It was moved again in 1798 and again in the 1820s to be set in an alcove in the center of the wall within a solidly built stone frame set on a plinth. It had a circular aperture through which the Stone was visible. In 1869 a protective iron grille and an explanatory inscription in Latin and English were placed on the church wall above it.

During the 19th and 20th centuries, “London Stone” was regularly referred to in popular London histories and guidebooks and visited by tourists. During his stay in England in the 1850s, the American author Nathaniel Hawthorne recorded a visit to London Stone in his journal.

In 1940 St Swithin’s church was burnt out by bombing in the Blitz. However, the outer walls remained standing for many years, with “London Stone” still in its place in the south wall. In 1962 the remains of the church were demolished and replaced by an office building, 111 Cannon Street. The “London Stone” was placed in a specially constructed Portland stone alcove, glazed and with an iron grille, in the new building. Inside the building, it was protected by a glass case.

In 2016 the Stone was put on temporary display at the Museum of London while building works were carried out, and it was returned to Cannon Street in 2018.

The new premises publicly display “London Stone” on a plinth, within a Portland stone casing loosely inspired by its 19th-century predecessors, and behind glass with a plaque.

Text of the London Stone plaque

A Virtual Tour of London’s Museums and Historic Sites

The London Stone ~ Relic From A Lost City?

The Strange Story of the London Stone

“The Medieval Kings after their coronations used to strike London Stone with their swords in token of the City’s submission.”
– George Byron Gordon