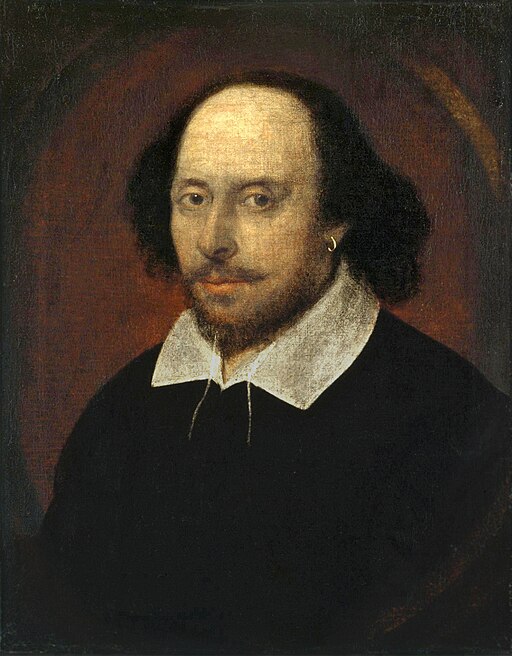 “The Chandos Portrait of William Shakespeare” is believed to depict the famous playwright, regarded as the greatest writer in the English language.

The engraved portrait of Shakespeare, on the title page of the first publication of his works, shows distinct similarities when compared to this painting.

However, it has not been possible to determine with certainty who painted the portrait, nor whether it truly depicts Shakespeare.

William Shakespeare (1564 – 1616) was an English poet, playwright, and actor, widely regarded as the greatest writer in the English language and the pre-eminent dramatist.

His plays have been translated into every dominant living language. They are performed more often than those of any other playwright.

The relatively dusky features of this portrait have caused some commentators to argue that this portrait has an “un-English” look and that the beard and eyes make the subject look more European.

The reality is that sixteenth-century Englishmen came in a variety of complexions, reflecting the mixed ancestry of Anglo-Saxon, Irish, British, Viking, Norman, Roman, French, and many other ethnic sources.

This famous painting is named after the Dukes of Chandos, who formerly owned the picture. The portrait was given to the National Portrait Gallery, London, on its foundation in 1856, and it is listed as the first work in its collection.

William Shakespeare’s works, including collaborations, consist of about 39 plays,154 sonnets, two narrative poems, and a few other verses.

His early plays were primarily comedies, and histories including Hamlet, Othello, King Lear, and Macbeth. These have been translated into every dominant language and are performed more often than those of any other playwright.

Born and raised in Stratford-upon-Avon, Shakespeare, at the age of 18, married Anne Hathaway, with whom he had three children.

He began his career in London as an actor, writer, and part-owner of a playing company, he appears to have retired to Stratford, where he died. Few records of Shakespeare’s private life have survived.

This lack of documentation has given rise to speculation about his appearance, his sexuality, his religious beliefs, and whether others wrote the works attributed to him.

The Chandos Portrait of William Shakespeare

First Folio and the Droeshout Portrait of Shakespeare

“All that glitters is not gold.”

“There is nothing either good or bad, but thinking makes it so.”

“Hell is empty, and all the devils are here.”

“The wheel is come full circle: I am here.”

“By the pricking of my thumbs, Something wicked this way comes. Open, locks, Whoever knocks!”

“All the world’s a stage, And all the men and women merely players: They have their exits and their entrances, And one man in his time plays many parts.”

“Fair is foul and foul is fair: Hover through the fog and filthy air.

“Some rise by sin, and some by virtue fall.”

“To do a great right, do a little wrong.”

“Brevity is the soul of wit.”

“Self-love, my liege, is not so vile a sin, as self-neglecting.”

“Some are born great, some achieve greatness, and some have greatness thrust upon them.”

“There is no darkness but ignorance.”

“To thine own self be true, and it must follow, as the night the day, thou canst not then be false to any man.”

“Uneasy lies the head that wears a crown.”

“God has given you one face, and you make yourself another.”

“The miserable have no other medicine, but only hope.”

“The course of true love never did run smooth.”

“If music be the food of love, play on.”

“Our doubts are traitors and make us lose the good we oft might win, by fearing to attempt.”

“When sorrows come, they come not single spies, but in battalions.”

“Give every man thy ear, but few thy voice.”

“We know what we are, but know not what we may be.”

“How sharper than a serpent’s tooth it is to have a thankless child!”

“The lady doth protest too much, methinks.”

“But love is blind, and lovers cannot see.”

“Better three hours too soon than a minute too late.”

“This above all: to thine own self be true.”

The “Impossible Doublet” in the Droeshout engraving of William Shakespeare