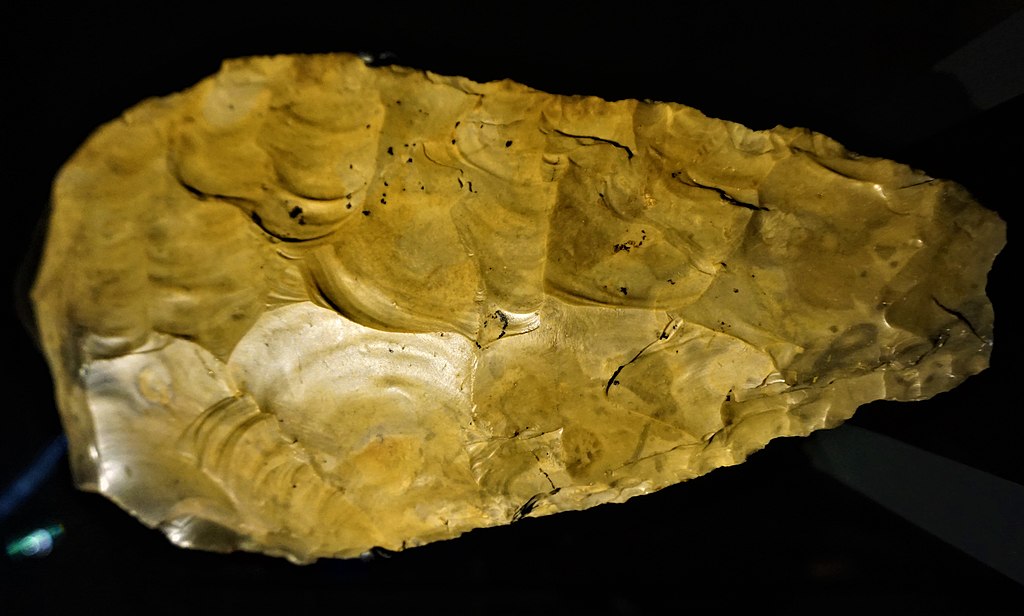 This large handaxe was produced by the Acheulian culture of 400,000 years ago, during the Lower Palaeolithic period.  It was found in Furze Platt, Berkshire, Britain in 1919.

It is one of the largest Handaxes ever found in Europe and considered too bulky to be useful, and therefore considered to have been a Neanderthal status symbol.

A handaxe is a prehistoric stone tool with two faces that is the longest-used tool in human history. It is characteristic of the lower Acheulean and middle Palaeolithic periods.

The most common hand axes have a pointed end and rounded base, which gives them their distinctive shape, and both faces have been knapped to remove the natural cortex, at least partly.

Hand axes were the first prehistoric tools to be recognized as such and were used to butcher animals, to dig, to chop wood, to hunt and to defend or attack.

Acheulean tools were produced during the Lower Palaeolithic era across Africa and much of West Asia, South Asia, and Europe, and are typically found with Homo erectus remains.

A Tour of the Natural History Museum, London

The Story of Prehistoric Cleavers

A Tour of Natural History Museums

A Tour of Science and Technology Museums