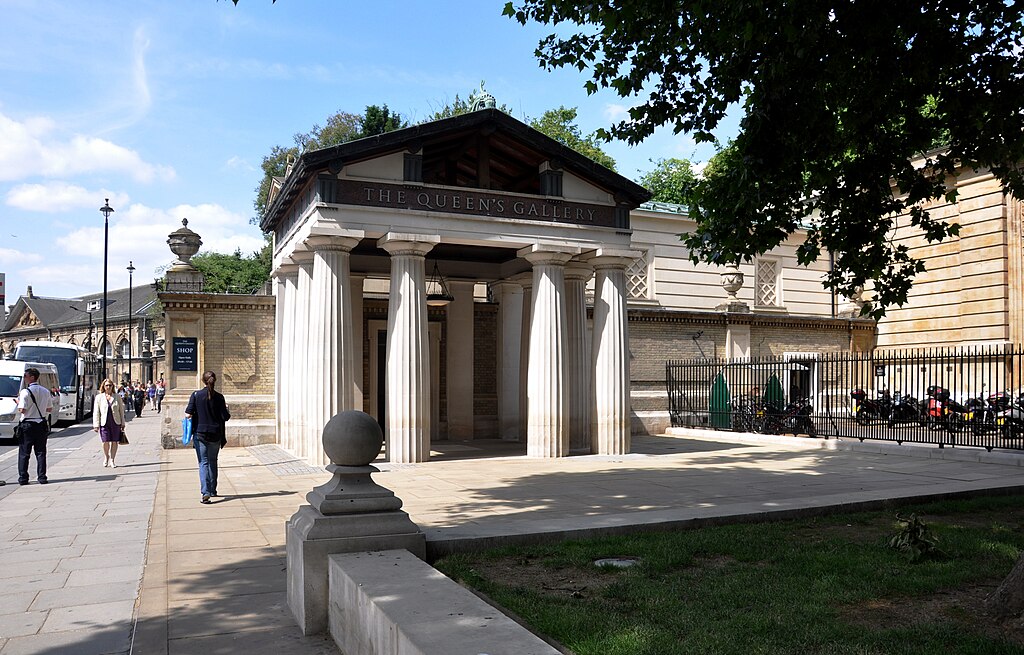 The Queen’s Gallery is an art gallery at Buckingham Palace, home of the British monarch, in London. It exhibits works of art from the Royal Collection on a rotating basis with about 450 works are on display at any one time.

When not on exhibition at the Queen’s Gallery, the masterpieces of the Royal Collection may be spread among many historic royal residences in the United Kingdom.

The gallery is on the west side of the Palace. It is on the site of what was a chapel that was bombed during the Second World War, and it is open to the public.

Highlights of the Queen’s Gallery and the Royal Collection

“Lady at the Virginal with a Gentleman”, ‘The Music Lesson’ by Johannes Vermeer

Their relationship is no precise or clear from this painting. The composition uses perspective to draw the eye towards the figures who are in front of the virginal.

“Massacre of the Innocents” by Pieter Bruegel the Elder

“Massacre of the Innocents” by Pieter Bruegel, the Elder, depicts the story from St Matthew’s Gospel when King Herod ordered the death of all children in Bethlehem under the age of two.

Herod made this command after hearing from the wise men of the birth of Jesus. Bruegel re-imagined the scene into a 16th-century Netherlandish village, where Spanish soldiers and German mercenaries attack the Flemish villagers.

This depiction served as a commentary on the occupying Spanish led troops in the prelude to the Dutch Revolt against Spanish rule, also known as the Eighty Years’ War.

“Courtyard in Delft at Evening: a Woman Spinning” by Pieter de Hooch

“Self-Portrait as the Allegory of Painting” by Artemisia Gentileschi

“Self-Portrait as the Allegory of Painting” by Artemisia Gentileschi was painted by the artist during her visit to London in 1638 to which Charles I had invited her.

Artemisia wears a brown apron over her green dress and seems to be leaning on a stone slab used for grinding pigments. The brown space in front of her is a canvas on which she is about to paint.

The position of the fingers of her right hand are different in the infra-red reflectography and x-radiography, it shows she chooses to lengthen her index finger.

“Cupid and Psyche” by Anthony van Dyck depicts the mythological story of Cupid finding Psyche and saving her from a dark and forbidding sleep.

There are various versions of the story, and in one version, Venus, who was jealous of Psyche’s beauty, set her several tasks with evil intent.

Psyche’s last task was to bring Venus a small portion of Proserpine’s beauty from Hades in an unopened casket. Psyche, overcome by curiosity, opened the box that can be seen in this painting and released not beauty, but an infernal sleep.

“Triple Portrait of Charles I” by Anthony Van Dyck

The colors of the costumes and the delicate pattern of the lace collars are different in each portrait. The blue ribbon of the Order of the Garter appears in all three.

The King also displays the fashion of the day in which men wore their hair longer on the left side. The heads in the painting are drawn and modeled with great care by Van Dyck.

The purpose for the picture was for it to be used as a reference work by Bernini in Italy to create a marble bust of Charles I.

However, the contrast color of the blue Garter ribbon with the three different colors of the King’s costume plus the beautifully patterned lace collars have turned this reference work into a masterful artwork.

A Virtual Tour of London’s Museums and Heritage Sites

Photo Credit: By By Photo: Andreas Praefcke (Own work (own photograph)) [CC BY 3.0 (http://creativecommons.org/licenses/by/3.0)], via Wikimedia Commons