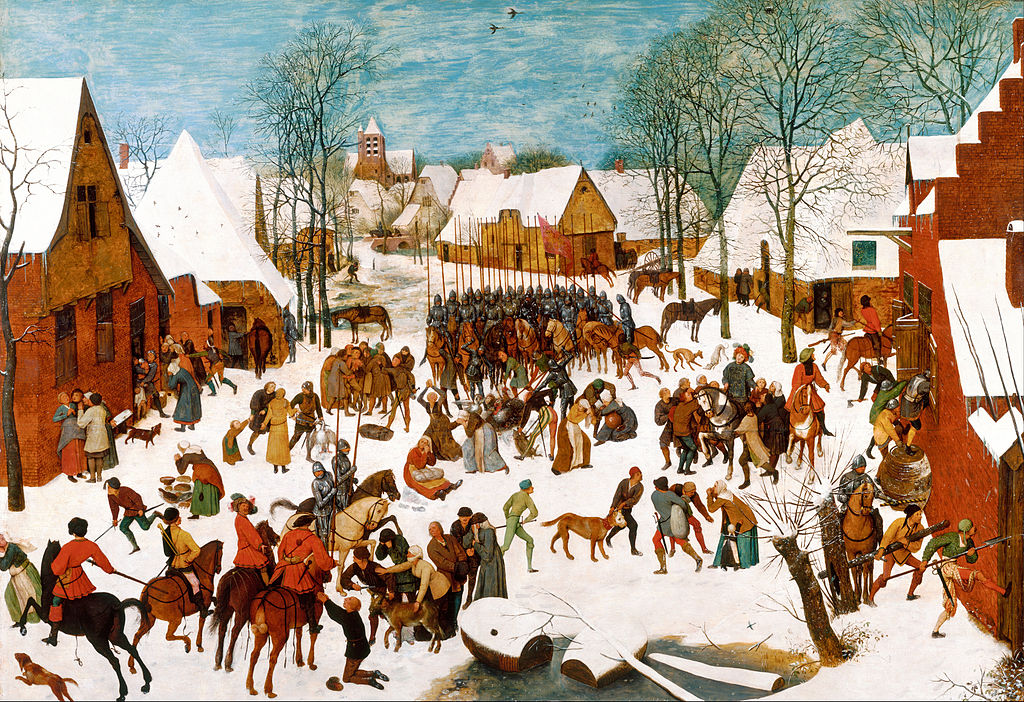 “Massacre of the Innocents” by Pieter Bruegel the Elder

“Massacre of the Innocents” by Pieter Bruegel, the Elder, depicts the story from St Matthew’s Gospel when King Herod ordered the death of all children in Bethlehem under the age of two.

Herod made this command after hearing from the wise men of the birth of Jesus. Bruegel re-imagined the scene into a 16th-century Netherlandish village, where Spanish soldiers and German mercenaries attack the Flemish villagers.

This depiction served as a commentary on the occupying Spanish led troops in the prelude to the Dutch Revolt against Spanish rule, also known as the Eighty Years’ War.

Bruegel’s detailed painting is typical of his elaborate narrative style, and the painting depicts numerous small story vignettes in the overall scene.

Bruegel’s art was a favorite image, and several oil-on-oak-panel versions of “The Massacre of the Innocent”s were painted by 16th-century Netherlandish painters Pieter Bruegel the Elder and his son Pieter Brueghel the Younger.

This is the only version by Bruegel, the Elder, many other variants are attributed to his son, Pieter Breughel the Younger, with different art historians listing as many as possibly 14 versions.

Massacre of the Innocents

A Tour of the Queen’s Gallery and the Royal Collection

The world of Pieter Bruegel the Elder

“That is why it was called Babel,
because there the Lord confused the language of the whole world.
From there, the Lord scattered them over the face of the whole earth.”
– Bible