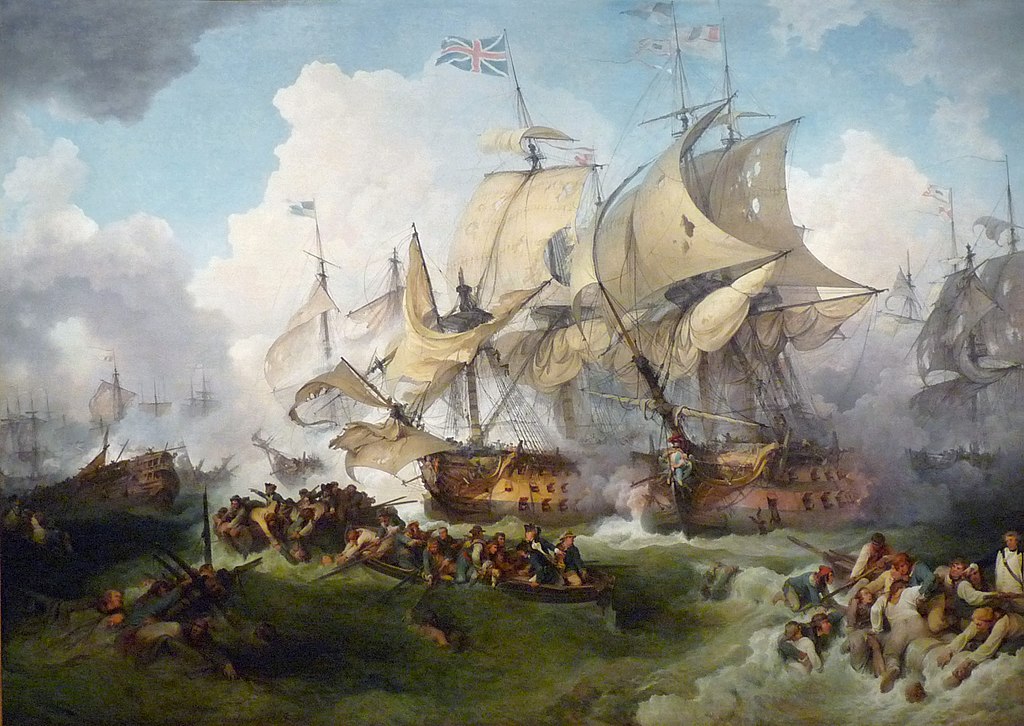 “Lord Howe’s Action” by Philip James de Loutherbourg is also known as the Glorious First of June and depicts British naval forces’ victory under Lord Howe over a French force on the 1st of June 1794.

In the center of the composition are the two flagships in a battle to the death. HMS Queen Charlotte is to the left and Montagne to the right. The pair engage during the battle, but never in the broadside position shown in the painting.

In the extreme right is the port bow of an English ship, behind which is another French ship. In the left foreground is the port side of a 74 guns French ship, sinking after a long and fatal duel. Other ships’ topsails, just showing above the smoke of battle.

The French ships are shown flying the early Revolutionary naval ensign with the French tricolor added to the Bourbon white naval ensign’s upper quadrant, this battle was the only major action the French fleet fought under it.

The French fleet was escorting a grain convoy, and the British captured seven of the enemy ships as a result of the battle. For this victory, Lord Howe received the Naval Gold Medal and chain. He was later promoted to Admiral of the Fleet.

The painting was commissioned by engravers and publishers, intended for engraving and printing. 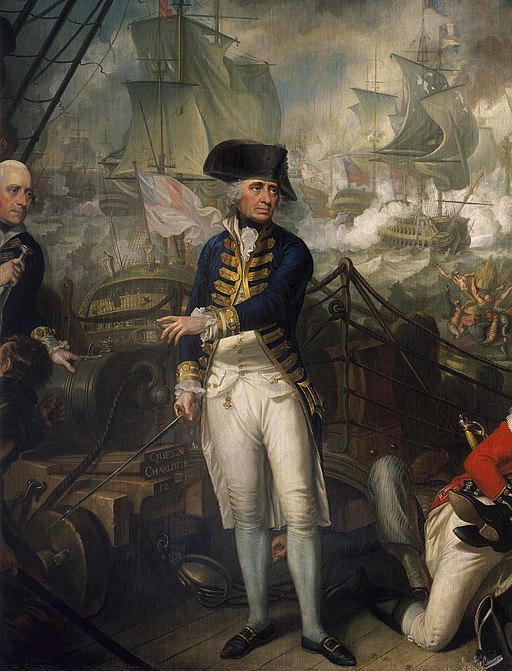 Lord Howe on the Deck of the ‘Queen Charlotte,’ 1 June 1794 by Mather Brown

Admiral of the Fleet Richard Howe (1726 – 1799) was a British naval officer. Serving in the Austrian Succession War, he gained a reputation for amphibious operations against the French coast.

At the beginning of the American War of Independence, Howe was sympathetic to the colonists. He was joined in a commission with his brother, General Sir William Howe, head of the land forces, to reconcile.

In North America, Howe is best known for his service during the American Revolutionary War, when he acted as a naval commander and a peace commissioner with the American rebels.

He also conducted a successful relief during the Great Siege of Gibraltar. Howe later commanded the victorious British fleet during the Glorious First of June in June 1794 during the French Revolutionary Wars.

Lord Howe’s Action, or the Glorious First of June

The Battle of The Glorious First of June 1794

The french revolutionary wars: The Glorious First of June battle

“Gentlemen, when the enemy is committed to a mistake we must not interrupt him too soon.”
– Horatio Nelson