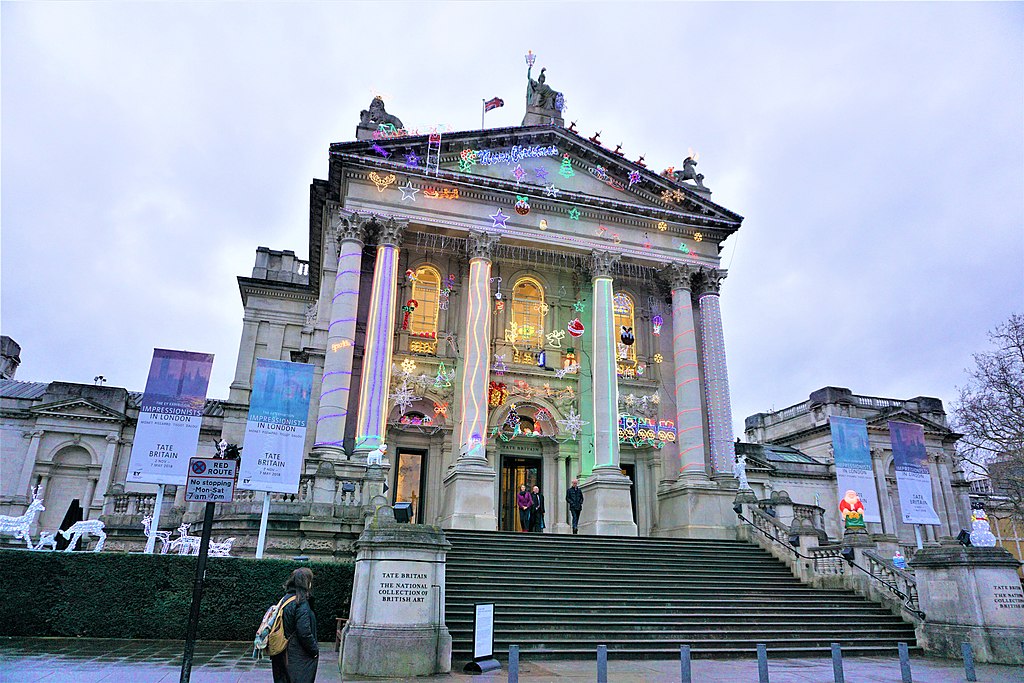 Tate Britain is part of the Tate network of galleries in England, with Tate Modern, Tate Liverpool, and Tate St Ives. Tate Britain is the oldest gallery in the network, having opened in 1897.

Tate Britain houses a significant and extensive collection of the art of  British art from 1500 to the present day.

It also has substantial holdings of the works of J. M. W. Turner, who bequeathed all his collection to the nation.

“Christ in the House of His Parents” by John Everett Millais

“Christ in the House of His Parents” by John Everett Milla depicts the Holy Family in Joseph’s carpentry workshop. The painting centers on the young Jesus, who has cut his hand while assisting Joseph in his workshop.

The composition has a plethora of symbolism representing the theological aspects of this religious subject. The most interesting aspect of this painting was how controversial it was when it was first exhibited.

It received many negative reviews because of its realistic depiction of a carpentry workshop, especially the dirt and wood shavings on the floor. 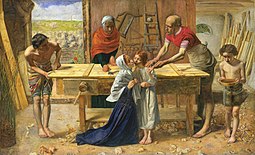 “Ophelia” by John Everett Millais depicts Ophelia, a character in William Shakespeare’s play Hamlet; the scene is described in a speech by Queen Gertrude.

Ophelia is singing while floating in a river in Denmark before she drowns. This Pre-Raphaelite work was not highly regarded when first exhibited at the Royal Academy, but has since come to be admired and influential for its beauty and its detailed and accurate depiction. 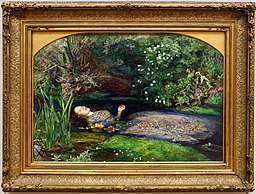 “The Lady of Shalott” by John William Waterhouse

The Lady of Shalott” by John William Waterhouse, portrays the ending of Alfred, Lord Tennyson’s 1832 poem of the same name.

The scene shows the plight of a young woman from Arthurian legend, who yearned with unrequited love for the knight Sir Lancelot but was isolated under a curse in a tower near King Arthur’s Camelot.

The Lady of Shalott was forbidden to look directly at the outside world. She was doomed to view the world through a mirror and weave what she saw into a tapestry. Her despair intensified when she saw loving couples in the far distance.

One day she saw Sir Lancelot passing on his way in the reflection of her mirror, and she was overcome with desire and dared to look out at Camelot, bringing about the curse.

The lady decided to face her destiny and escaped by boat, to sail to Camelot and her inevitable death. 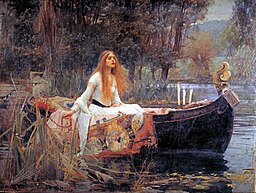 “Youth on the Prow, and Pleasure at the Helm” by William Etty

“Youth on the Prow, and Pleasure at the Helm” by William Etty was inspired by a metaphor in Thomas Gray’s poem “The Bard.” In the poem, the rule of a monarch was compared to a gilded ship whose occupants are unaware of an approaching storm.

Etty chose to illustrate the metaphor by depicting a golden boat filled with and surrounded by nude and near-nude figures.

The nude figure above the ship, representing Zephyrus, the Greek mythological personification of the west wind, blowing on the sails.

Another nude representing Pleasure, lies on a large bouquet, loosely holding the helm of the boat and allowing Zephyr’s breeze to dictate its course.

The naked figures were intended to express the themes of sexual appetites entrapping innocent youth, and the sexual power women hold over men.

Claude Monet Painting by the Edge of a Wood” by John Singer Sargent shows the famous impressionist master Claude Monet at Giverny together with Alice Hoschedé, whom Monet had befriended and who was to become his second wife.

Monet is sitting at an easel painting a landscape outdoors, doing what he advocated, painting directly from nature.

In the 1880s, Sargent attended the Impressionist exhibitions, and he began to paint outdoors in the Plein-air manner after visiting Claude Monet at his home in the village of Giverny. This painting reflects Claude Monet’s influence on Sargent, who purchased four Monet works for his collection. 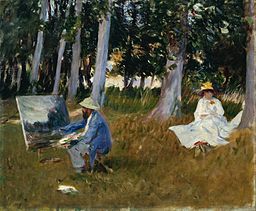 Love Locked Out” by Anna Lea Merritt is the artist’s best-known work, and in memory of her late husband, who died in 1877, just three months after their wedding.

Cupid, the mythology god of love, is shown here trying to force open the door of a mausoleum. Merritt feared the subject of her painting would be misinterpreted.

She wrote in her memoir: “I feared people liked it as a symbol of forbidden love, while my Love was waiting for the door of death to open and the reunion of the lonely pair.” The depiction of the male nude by a female artist was controversial in late nineteenth-century London.

Merrit received favorable reviews by choosing to paint a child and not an adult. Children, she believed, were less conscious of nudity.

“Portrait of Almina Daughter of Asher Wertheimer” by John Singer Sargent was the last in the series of Sargent’s portraits of the Wertheimer family.

The Wertheimer portraits are a series of twelve portrait paintings made by John Singer Sargent of and for the British art dealer Asher Wertheimer (1843-1918) and his family. The series was Sargent’s most significant private commission.

Almina was Asher Wertheimer’s fifth daughter. She is shown in an oriental costume of a white Persian dress and a turban entwined with pearls.

The white and green over-jacket was a studio prop, as was the musical instrument. Paintings of European women cast as alluring ‘orientals’ were fashionable at the turn of the twentieth century. Almina (1886-1928), married Antonio Pandelli Fachiri (1886-1928/9) in 1915.

This painting is the first of thirty-two nighttime landscapes that Whistler began calling nocturnes. All the nocturnes were painted with extremely fluid paint that allowed Whistler to build thin layers of luminous color.

The fluid mixture was so thin that the wet canvas had to be painted flat, so the paint would not run.

“Amor and Psyche” by Alphonse Legros

“Amor and Psyche” by Alphonse Legros is a depiction of Cupid as he approaches the princess to wake her by touching her with his arrow. Venus was jealous of Psyche’s beauty, and she sent her son Cupid to work her revenge.

Cupid is sent to shoot Psyche with an arrow so that she may fall in love with something hideous.

He instead scratches himself with his dart, which makes any living thing fall in love with the first thing it sees. Consequently, he falls deeply in love with Psyche. 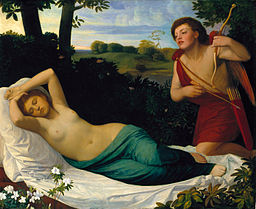 “The Lament for Icarus” by Herbert James Draper depicts the dead Icarus, surrounded by lamenting nymphs.

The wings of Icarus are based on the bird-of-paradise pattern and surprising, Icarus’s wings appear fully intact, contrary to the myth where the wax melted and Icarus fell flapping his bare arms.

This Pre-Raphaelite inspired image of a beautiful winged creature was used to create a symbolic, romantic, and heroic appearance. The tanned skin of Icarus symbolizes his close approach to the Sun before falling.

The rays of the setting sun on distant cliffs emphasize the transience of time. 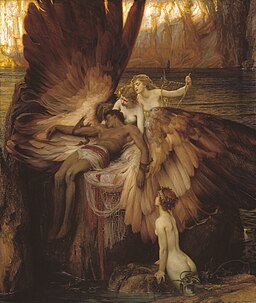 “The Decline of the Carthaginian Empire” by J. M. W. Turner

“The Decline of the Carthaginian Empire” by J. M. W. Turner depicts the final days of the capital city of the ancient Carthaginian civilization.

However, as Roman power and ambition increased, the Romans fought three wars against Carthage. The Roman Republic eventually destroyed the ancient city in the Third Punic War in 146 BC.

As the Carthaginian Empire fell, another superpower in the form of the Roman Empire rose. 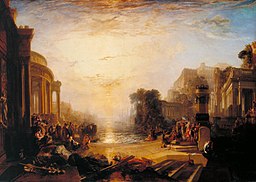 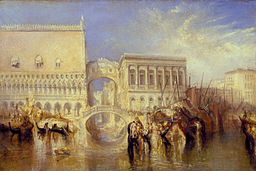 “Consulting the Oracle” by John William Waterhouse depicts a group of seven young girls, sitting in a semicircle around a lamplit shrine. They are waiting in anticipation for the priestess to interpret the words of the Teraph.

The priestess motions for silence as she bends forward to catch the mysterious utterances.

The Teraph was a human head, cured with spices, which was fixed against the wall, with lamps being lit before it. A teraph was an idol or image reverenced by the ancient Hebrews and kindred peoples, apparently as a household god.

Primitive religious rites were performed in the presence of Teraph. Also, the imagination of diviners was inspired to hear a low voice predicting future events. The painting’s setting is imaginary but has exotic, middle-eastern motifs. 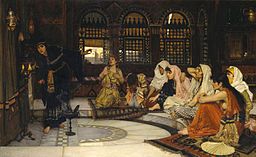 This composition is one of Waterhouse’s most daring artworks. The body is dramatically foreshortened, and the snow contrasts with 12-year’s exposed flesh. 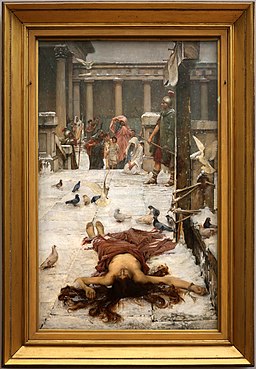 “The Beloved” by Dante Gabriel Rossetti

The bridal party all contrasts strikingly with the red hair and pale skin of the bride. They have varying shades of brunette hair and darker skin tones. This color contrast was carefully painted as a frame to the bride’s features. 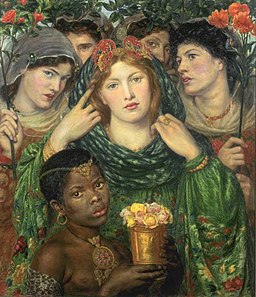 The two young girls dressed in white are in a garden dominated by green foliage, full of pink roses, with a selection of yellow carnations and tall white lilies above them.

The viewer’s perspective is set at an adult’s eye level, looking down on the children and the lanterns.

This painting is a small watercolor triptych executed in the medievalist style of this period in Rossetti’s art.

An art movement is an art style with a common philosophy followed by a group of artists during a period. There are many overlaps between various periods and movements, especially as movements that started in one country slowly crossed the world.

Some of the major Art Periods and Movements covered by The National Gallery and Tate Britain include:

Tate Britain: A walk-through of 500 years of British Art