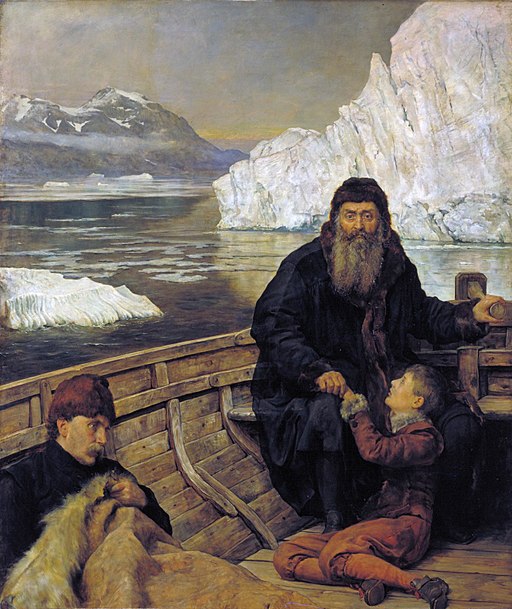 “The Last Voyage of Henry Hudson” by John Collier

“The Last Voyage of Henry Hudson” by John Collier depicts the famous English sea explorer and navigator who, together with his son and a few loyal crew, were cast adrift by his mutinous crew.

In 1611, while on an expedition and after wintering on the shore of James Bay, Hudson planned to continue to explore Hudson Bay to discover the North-West Passage. Unfortunately, most of his crew ardently wanted to return home, and much of the crew mutinied. The mutiny resulted in a struggle in which four men were killed.

The mutineers then set Hudson, his teenage son John, and seven crewmen, either sick and infirm or loyal to Hudson, adrift from the ship in a small open boat.

After the mutiny, Hudson’s small boat broke out oars and tried to keep pace with the larger ship for some time. The mutineers finally tired of the pursuit and unfurled additional sails, enabling the larger vessel to leave the tiny open boat behind.

Hudson and the other seven aboard the boat were never seen again, despite two subsequent searches in 1612 and 1668–1670.

This mutineer’s actions effectively marooned the castaways in Hudson Bay. Their fate was unknown as they were never seen again, and their remains were never found.

Collier’s composition shows Hudson, eerily staring out at the viewer. The vast, Arctic landscape in the background hints at the terrifying human drama that was to unfold.

The taboo of cannibalism was speculated as there were other castaway incidents in which the stronger survivers would eat the weaker or deceased crew in desperation to survive. However, the act was usually futile, and on this occasion, all eventually died.

Only eight of the thirteen mutinous crewmen survived the return voyage to Europe. They were arrested in England, and some were put on trial.

However, no punishment was imposed as the survivors were considered too valuable to execute as they were sources of valuable information. They had traveled to the New World and could describe sailing routes and conditions.

In addition to Hudson Bay, a massive body of water, many other topographical features and landmarks are named for Hudson.

Henry Hudson (1565 – 1611) was an English sea explorer and navigator known for his explorations of present-day Canada and parts of the northeastern United States.

In 1607 and 1608, Hudson made two attempts to find a rumored Northeast Passage to Cathay via a route above the Arctic Circle.

In 1609, he explored the region around the modern New York on behalf of the Dutch East India Company.  He explored the Hudson River, which was later named after him, and thereby laid the foundation for the region’s Dutch colonization.

On his final expedition, in search of the Northwest Passage, Hudson became the first European to see Hudson Strait and Hudson Bay.

In 1611, after wintering on the shore of James Bay, Hudson wanted to press on to the west, but most of his crew mutinied.

The mutineers cast Hudson, his son, and seven others adrift; the Hudsons and their companions were never seen again.

John Collier (1850 – 1934) was an English artist and an author. He painted in the Pre-Raphaelite style and was one of the most prominent portrait painters of his generation.

Collier was from a talented and successful family. In due course, Collier married into the family of Thomas Henry Huxley, President of the Royal Society. Collier’s first wife, in 1879, was Marian Huxley.

She was a painter who studied, like her husband, at the Slade and exhibited at the Royal Academy and elsewhere. After the birth of their only child, she was taken to Paris for treatment, where she died in 1887.

Collier’s daughter by his first marriage, Joyce, was a portrait miniaturist and a member of the Royal Society of Miniature Painters.

In 1889 Collier married Mady’s younger sister Ethel Huxley. With his second wife, he had a daughter and a son.

Sixteen of John Collier’s paintings are now in the National Portrait Gallery collections in London, and two are in the Tate Gallery. Many other museums also hold his art.

The Last Voyage of Henry Hudson

The Last Voyage of Henry Hudson

What Happened To Henry Hudson?

The Four Voyages of Henry Hudson

“These natives are a very good people; for when they saw that I would not remain, they supposed that I was afraid of their bows; and, taking their arrows, they broke them in pieces and threw them into the fire. “
– Henry Hudson