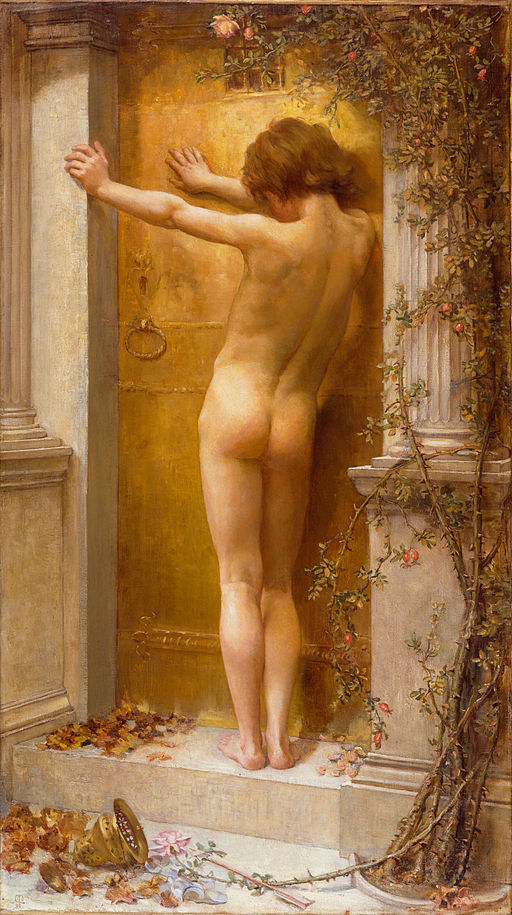 “Love Locked Out” by Anna Lea Merritt is the artist’s best-known work, and in memory of her late husband, who died in 1877, just three months after their wedding.

Cupid, the mythology god of love, is shown here trying to force open the door of a mausoleum. Merritt feared the subject of her painting would be misinterpreted. She wrote in her memoir:

“I feared people liked it as a symbol of forbidden love, while my Love was waiting for the door of death to open and the reunion of the lonely pair.”

The depiction of the male nude by a female artist was controversial in late nineteenth-century London.

Merrit received favorable reviews by choosing to paint a child and not an adult. Children, she believed, were less conscious of nudity.

Anna Massey Lea Merritt painted portraits, landscapes, and religious scenes and etchings. She was born in Philadelphia but lived and worked in England for most of her life.

Merritt worked as a professional artist for most of her adult life. Merritt had intended to end her professional career as a painter after her wedding, but she returned to painting after her husband’s death.

“Love Locked Out” became the first painting by a woman artist acquired for the British National Collection.

A Tour of Tate Britain

“To succeed, jump as quickly at opportunities as you do at conclusions.”
– Benjamin Franklin