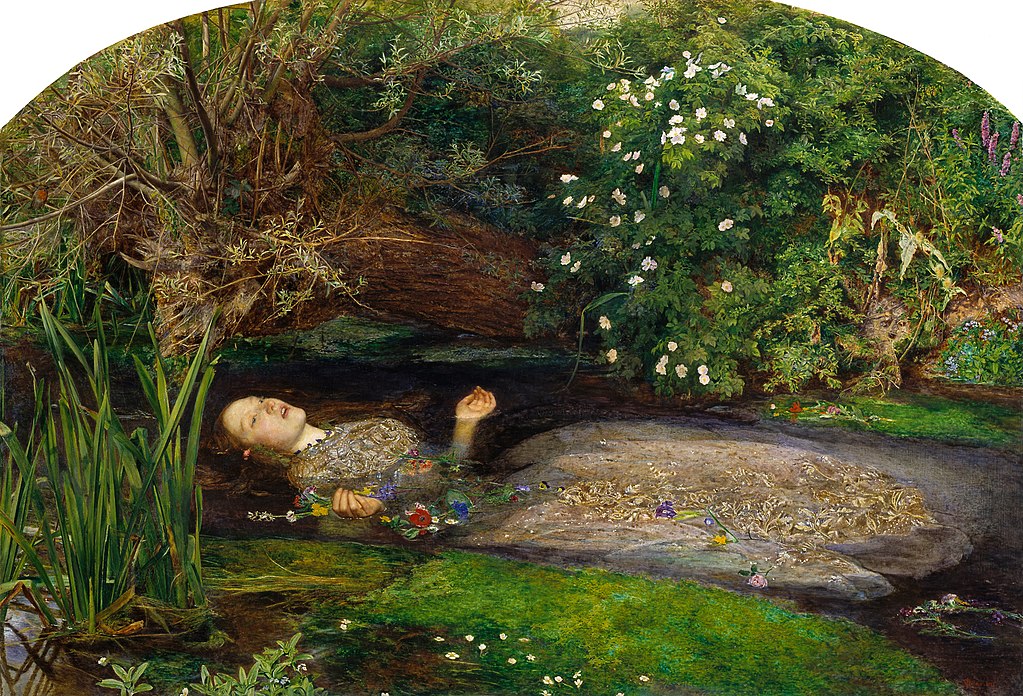 “Ophelia” by John Everett Millais depicts Ophelia, a character in William Shakespeare’s play Hamlet. This scene is described in a speech by Queen Gertrude. Ophelia is singing while floating in a river before she drowns.

This Pre-Raphaelite work was not highly regarded when first exhibited at the Royal Academy. However, it has since come to be hugely admired, popular, and influential for its beauty and its detailed and accurate depiction.

The episode depicted in this painting is not portrayed on a theatre stage but is described in the play. Ophelia’s death has been praised as one of the most poetically written death scenes in literature.

Ophelia has fallen into the river from a tree overhanging it while gathering flowers. She lies in the water singing songs, as if unaware of her danger. The trapped air in her clothes allowed her to stay afloat temporarily but eventually led to her death.

“incapable of her own distress.
Her clothes spread wide,
And, mermaid-like, awhile they bore her up.
Her garments, heavy with their drink,
Pull’d the poor wretch from her melodious lay down to muddy death.”

Ophelia is a young noblewoman of Denmark and a potential wife of Prince Hamlet, and she is one of only two female characters in the play.

Ophelia has been a frequent subject in artwork, often in a Romantic or Classical style. This painting has been widely referenced and imitated in art, film, and photography. In Laurence Olivier’s Hamlet, this scene formed the basis for the portrayal of Ophelia’s death.

The artist, Sir John Everett Millais, was a Victorian-era English painter who was one of the founders of the Pre-Raphaelite Brotherhood.

The Pre-Raphaelite Brotherhood was founded at his home in London. Millais became a famous exponent of the style with this painting.

By the mid-1850s, Millais was moving away from the Pre-Raphaelite style and developing a new form of realism in his art.

Ophelia is a character in William Shakespeare’s drama Hamlet. She is a young, beautiful noblewoman of Denmark with whom Hamlet has fallen in love.

Ophelia, in her innocence, is manipulated by her father and her brother to spy on Hamlet, who she loves. As she lapses into torment, she remains maidenly, singing songs about flowers and finally drowning in the river amid the flower garlands she had gathered.

At Ophelia’s funeral, Hamlet’s mother sprinkles flowers on Ophelia’s grave. She declared that she wished that Ophelia could have been Hamlet’s wife.

Ophelia’s brother then jumps into Ophelia’s grave in remorse for his actions. He asks for the burial to wait until he has held her in his arms one last time and proclaims how much he loved her.

Hamlet then challenges her brother and claims that he loved Ophelia more than “forty thousand” brothers could.

“Art is not a study of positive reality. It is the seeking for ideal truth.”
– John Ruskin