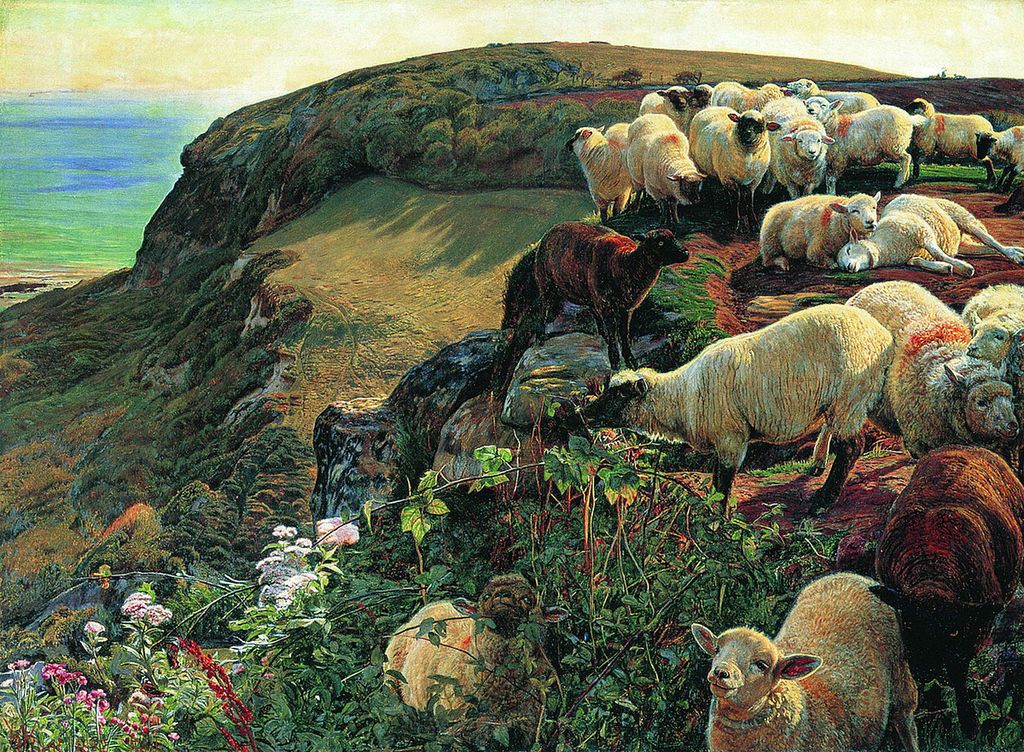 “Our English Coasts” by William Holman Hunt depicts a flock of sheep lining the picturesque coast of Sussex. The scenic location is on the cliffs at Fairlight Glen, beside Covehust Bay near Hastings, which is called the Lovers’ Seat.

Hunt worked en plein air at the location depicted in late 1852, despite cold and rainy weather. Hunt has paid scrupulous attention to natural detail and painted in many layers, with brilliant colors.

“go to Nature in all singleness of heart, and walk with her laboriously and trustingly, having no other thoughts but how best to penetrate her meaning, and remember her instructions; rejecting nothing, selecting nothing, and scorning nothing; believing all things to be right and good, and always rejoicing in the truth.”

Following Ruskin’s dictum that art in its truthfulness can teach a moral lesson, Hunt created this magnificent Pre-Raphaelite landscape.

The treatment of light was the most striking aspect of the painting for the critics of the time. Ruskin wrote that:

“It showed to us, for the first time in the history of art, the absolutely faithful balances of color and shade by which actual sunshine might be transposed into a key in which the harmonies possible with material pigments should yet produce the same impressions upon the mind which were caused by the light itself.”

William Holman Hunt (1827 – 1910) was an English painter and one of the founders of the Pre-Raphaelite Brotherhood. His paintings were notable for their great attention to detail, vivid color, and symbolism.

Of all the members of the Pre-Raphaelite Brotherhood, Hunt remained most true to their ideals throughout his career. He was always keen to maximize the popular appeal and public visibility of his works.