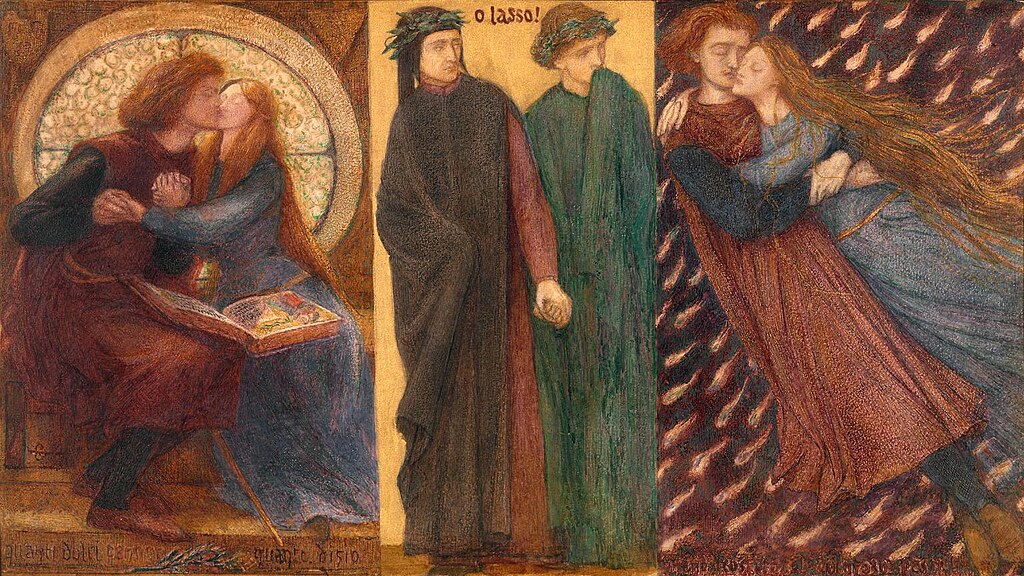 The left-hand panel depicts Paolo and Francesca secretly embracing with a kiss that condemns the lovers. Their first kiss occurs while reading together the large illuminated book open on their knees.

The figure in the book is dressed, like Paolo, in red and blue. The book is about the Arthurian knight Lancelot, who also suffered for his forbidden love. A plucked red rose at their feet.

The central section depicts Dante and the Roman poet Virgil, who is his guide, both crowned with laurels. They have stopped on their journey to observe with concern the two lovers on the right.

They are condemned for adultery, although Dante has sympathy for their true love and the cruelty of their death.

In Rossetti’s painting, the lovers appear to be float like wraiths in each other’s arms amid the flames of hell.

Rossetti adds details to the story by inscribing quotations from Dante’s text around the edge of the composition.

This painting is a small watercolor triptych executed in the medievalist style of this period in Rossetti’s art.

Francesca was the sister-in-law of Paolo Malatesta, and both were married, but they fell in love. Dante told Their tragic story in his Divine Comedy.

The triptych has several inscriptions taken from Canto V, with Rossetti writing relevant quotations in the original Italian around the edge of the composition:

“One day we read, to pass the time away
of Lancelot, of how he fell in love;
alone we were, and no Suspicion near us …
then he, who never from me shall separate,
at once my lips all trembling kissed.”
— Divine Comedy, Canto V, vv.127–136

In the final panel of the triptych, the lovers are being blown about violently with the wind, described by Dante as:

“The infernal storm, eternal in its rage, sweeps and drives the spirits with its blast.”

Francesca da Rimini or Francesca da Polenta (1255 – c. 1285) was the daughter of the lord of Ravenna, Guido I da Polenta of Ravenna. She was a historical contemporary of Dante Alighieri, who portrayed her as a character in the Divine Comedy.

Francesca was married to the brave, yet disabled Giovanni Malatesta in around 1275. The marriage was a political one, Francesca did not know Giovanni.

Francesca’s father had been at war with the Malatesta family, and the marriage of his daughter was a way to secure the peace that had been negotiated between the two families.

Francesca fell in love with Giovanni’s younger brother, Paolo. Though Paolo, too, was married, they managed to carry on an affair for some ten years.

Giovanni ultimately surprised the two lovers in Francesca’s bedroom sometime between 1283 and 1286 and killing them both.

In The Divine Comedy, Dante and Virgil meet Francesca and her lover Paolo in the second circle of hell, reserved for the lustful.

Here, the couple is trapped in an eternal whirlwind, doomed to be forever swept through the air just as they allowed themselves to be swept away by their passions.

Dante calls out to the lovers, who are compelled to pause before him briefly, and he speaks with Francesca. He asks her what led to her and Paolo’s damnation, and Francesca’s story strikes such a sympathetic chord within Dante that he faints out of pity. 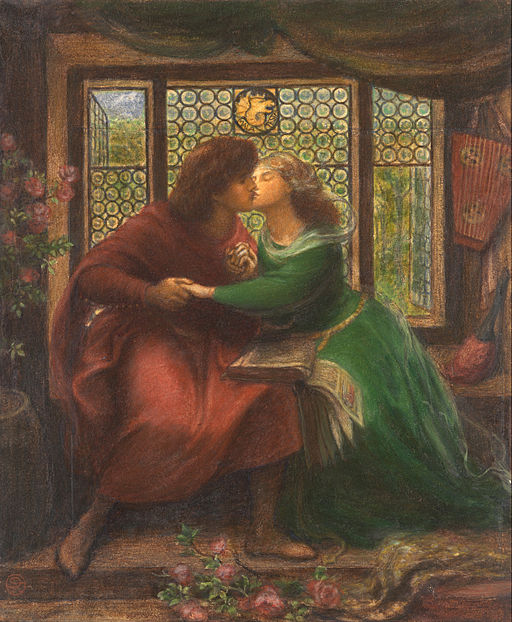 This watercolor version of “Paolo and Francesca da Rimini” by Dante Gabriel Rossetti is at the National Gallery of Victoria, Australia.

It was created over ten years after the earlier triptych and focused on the first scene of the story, the forbidden kiss between the two lovers.

A feature of this painting that makes it different and exciting is that it has one of the most complex of the Pre-Raphaelite frames.

The low profile frame makes use of vertical joints in the flat, which is gilded direct to oak.  It carries the label of the frame maker Foord & Dickinson, who are known to have built frames for painters from the Pre-Raphaelite Brotherhood.

The outer part of the frame is carved in high relief in a rustic manner. The frame includes text carved into the wood frame and on two annotated, gilded panels attached to the surface.

Rossetti’s art is characterized by its sensuality and its medieval revivalism. Rossetti’s personal life was closely linked to his work, especially his relationships with his models and muses.