Past and Present – Misfortune by Augustus Egg

Past and Present is the title of a series of three oil paintings made by Augustus Egg in 1858, which are designed to be exhibited together. The triptych is a visual morality tale that depicts the discovery and consequences of adultery on a middle-class Victorian family.

These Victorian-era paintings reflected fears that morality and family life were imperiled by the recent Matrimonial Causes Act 1857, which reformed the law of divorce.

The new Law moved divorce jurisdiction from the ecclesiastical courts to the civil court and made divorce a realistic prospect.

The first painting shows the drawing-room of a middle-class Victorian home, which depicts the moment when the family’s domestic trust is broken.

The husband sits shocked, clutching a letter that reveals her adultery, his left foot resting on a portrait of her lover.

The woman lies prostrate hands clasped together, with her gold bracelet resembling manacles.

An apple has been cut into two pieces; one half on the table, stabbed through its core by a small knife; the other half has fallen to the floor displaying a worm-ridden core.

The family’s daughters are playing with a house of cards that is tumbling to the floor.

The rear wall of the room bears two portraits, one on either side of the fireplace and mirror: the wife’s portrait hangs to the left, beneath a picture of the expulsion of Adam and Eve from the Garden of Eden.

The husband’s portrait hangs beneath a shipwreck scene labeled “Abandoned.”

Past and Present Number One – Misfortune by Augustus Egg

Past and Present 2 – Prayer by Augustus Egg

Past and Present Number Two – Prayer by Augustus Egg is the second painting in the series and shows a night scene in a dark and sparsely-furnished bedroom. The story is unfolding several years later as the daughter is older now.

The daughter is weeping into the lap of the woman, who sits in a black mourning dress, looking out of a window to a clouded moon. The same small portraits of the husband and the wife decorate the bedroom wall.

The Matrimonial Causes Act 1857 of the Parliament of the United Kingdom reformed the law on divorce. The Act moved litigation from the jurisdiction of the ecclesiastical courts to the civil courts, establishing a model of marriage based on contract rather than a sacrament.

The effect of the Act was to widen the availability of divorce beyond those who could afford to bring proceedings for annulment.

The Act allowed legal separation by either husband or wife on the grounds of adultery, cruelty, or desertion. The Act did not treat women’s and men’s grounds for divorce equally.

Past and Present Number Two – Prayer 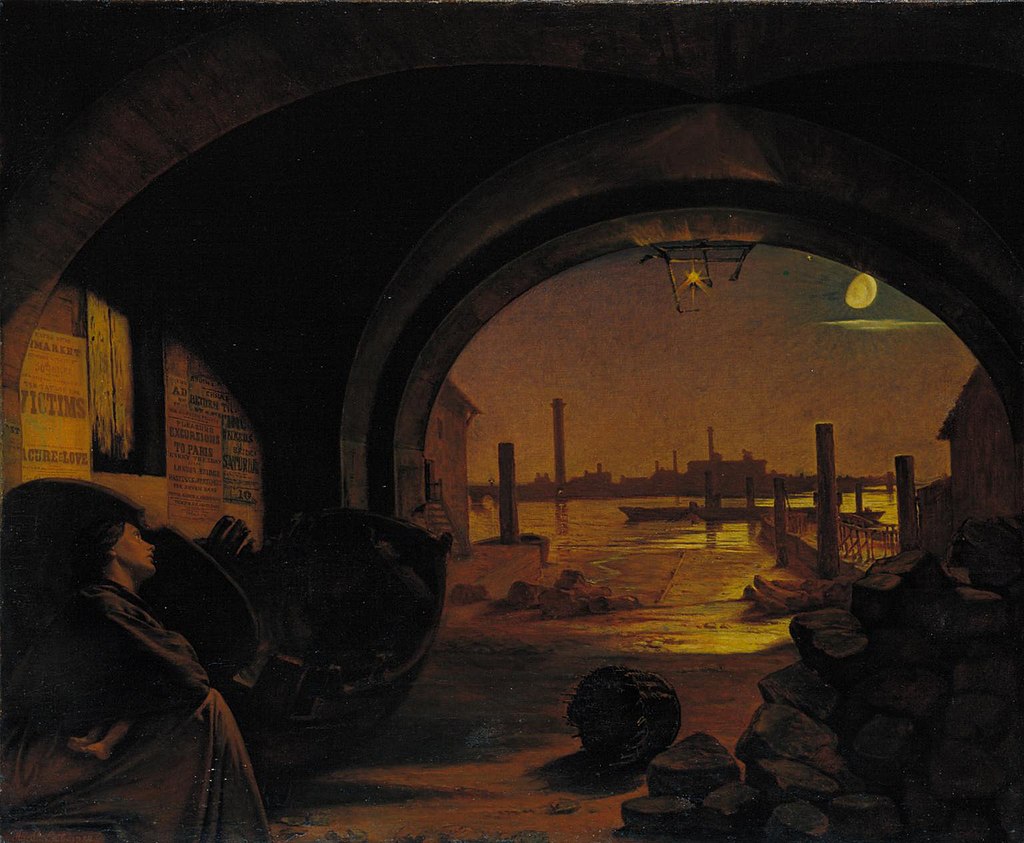 Past and Present 3 – Despair by Augustus Egg

Past and Present Number Three by Augustus Egg is the third painting in the series and depicts a night scene in the alleyways outside. The wife is sitting in the shadows beneath arches, by the River Thames, she is looking up to the moon.

She holds a bundle of rags from which protrude the thin legs of an infant, perhaps the result of the affair. Posters on the wall advertise two contemporary plays, both tales of unhappy marriages.

The viewer is left to determine whether the woman should be condemned or pitied. In Victorian Britain, an affair had far more severe consequences for a woman than a man.

In 1857, the Lord Chancellor testified that a ‘wife might …condone an act of adultery on the part of the husband; but a husband could not condone a similar act on the part of a wife.’

Past and Present by Augustus Egg is a set of three paintings, a triptych on the theme of the fallen woman. These paintings are typical of the social moralist art that was popular in Victorian art.

Past and Present Number Three – Despair

A Tour of Tate Britain

“You never really know a man until you have divorced him.”
– Zsa Zsa Gabor