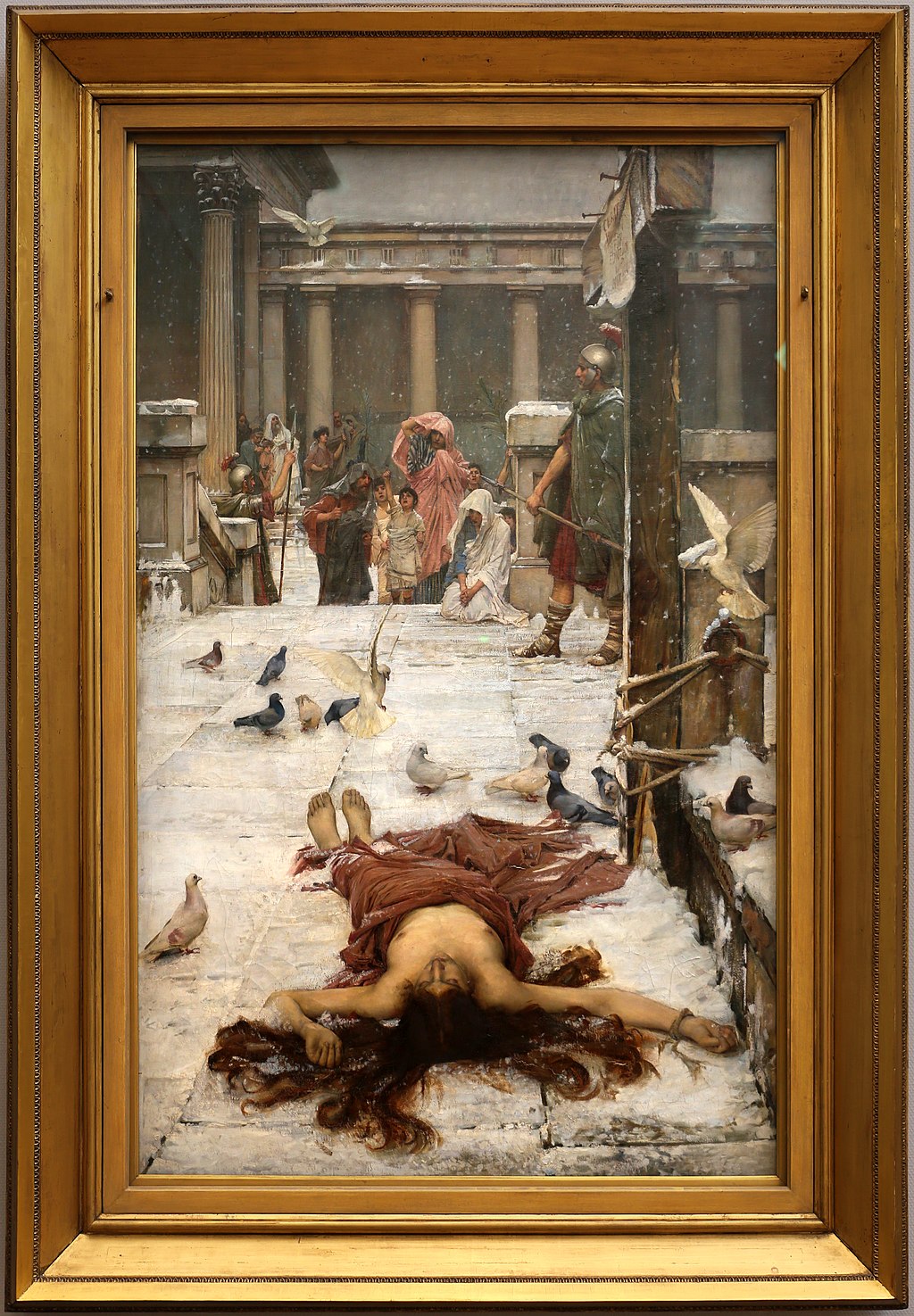 This composition is one of Waterhouse’s most daring artworks. The body is dramatically foreshortened, and the snow contrasts with 12-year’s exposed flesh.

Waterhouse’s sensitive handling of the subject, the youth of the saint, and the historical context of the painting allowed him to escape Victorian era criticism for the depiction of nudity.

She is regarded as the Patron Saint of Runaways and Torture victims.

Eulalia of Mérida (292 – 304) was a young Roman Christian martyred in Augusta Emerita, the capital of Lusitania, modern Mérida, Spain, during the Persecution of Christians.

Eulalia was a devout Christian, aged 12–14, whose mother sequestered her in the countryside because all citizens were required to avow faith in the Roman gods.

However, Eulalia ran away to profess herself a Christian and challenged the authorities to martyr her.

The judge’s attempts to flatter her and bribe her failed. According to a fifth-century poet, she said:

“Isis, Apollo, and Venus are naught,
Nor is Maximian anything more;
Nothing are they, for by hand, they were wrought.”

Eulalia was then tortured with hooks and torches, and burnt at the stake. She taunted her torturers all the while until suffocating from smoke inhalation.

As she expired, a dove flew out of her mouth. This sight frightened away the soldiers and allowed miraculous snow to cover her nakedness.

A shrine over Eulalia’s tomb was soon erected. Veneration of Eulalia was popular with Christians by 350, and her relics were distributed through Iberia.

Her shrine was the most popular in Visigothic Spain, and she was made patron saint. There is debate about whether Saint Eulalia of Barcelona, whose story is similar, is the same person.

Eulalia was invoked as the protector of Christian troops in the Reconquista. She was the patron of the territories of Spain during their formation.

A Tour of the Pre-Raphaelite Artists

“To see clearly is poetry, prophecy, and religion, all in one.”
– John Ruskin