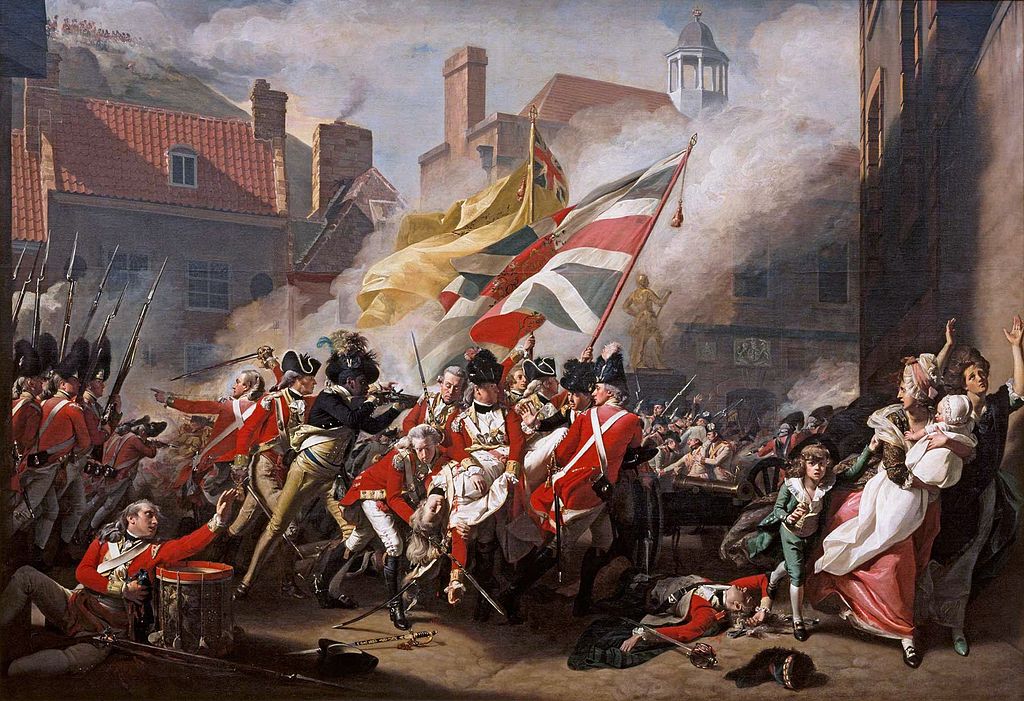 “The Death of Major Peirson, 6 January 1781” by John Singleton Copley

“The Death of Major Peirson, 6 January 1781” by John Singleton Copley depicts the death of Major Francis Peirson at the Battle of Jersey. The Battle was the last French attempt to seize the island of Jersey.

The invasion was intended to remove the threat that British naval vessels based in Jersey posed to American ships in the American Revolutionary War.

Approximately 1,000 French soldiers landed overnight on 5–6 January. They occupied St Helier early and captured the Lieutenant Governor in bed on the morning of 6 January.

Although Governor surrendered, Peirson, the 24-year-old commander of around 2,000 troops of the British garrison, refused to surrender. As Peirson organized a counter-attack, a French shot killed him.

Lieutenant Philippe Dumaresq of the Jersey militia took command of the British forces and quickly overwhelmed the French, most of whom surrendered.

Although Peirson was killed in the early stages of the Battle, the painting shows Peirson being shot down, leading the final charge, giving him a more heroic role and fate.

To the left, his black servant Pompey avenges his master by shooting the sniper. The depictions of the officers supporting the stricken Peirson are accurate portraits. Copley modeled the civilians fleeing to the right on his wife, family nurse, and children.

Peirson became a national hero, and the painting drew crowds when it was first exhibited with admission charged at 1 shilling.

The Battle of Jersey on 6 January 1781 was an attempt by French forces to invade Jersey and remove the threat the island posed to French and American shipping in the Anglo-French War.

Jersey provided a base for British privateers, and France, engaged in the war as an ally of the United States, sent an expedition to gain control of the island.

Jersey is 14 miles (23 km) off the coast of France, which made it of strategic importance during any war between Britain and France.

Large numbers of privateers operated out of the island, causing chaos amongst French merchant shipping. The French government decided to neutralize this threat. The French expedition ultimately failed. Its commander, Baron Philippe de Rullecourt, died of wounds sustained in the fighting.

Jersey is a British Crown dependency located near the coast of Normandy, France. It is the second-closest of the Channel Islands to France.

Jersey was part of the Duchy of Normandy, whose dukes went on to become kings of England.

After Normandy was lost by the kings of England in the 13th century, Jersey and the other Channel Islands remained attached to the English crown.

Jersey is a self-governing parliamentary democracy under a constitutional monarchy, with its own financial, legal, and judicial systems, and the power of self-determination.

Major Francis Peirson (1757 – 1781) was a British Army officer who refused French demands to surrender and took command of the Jersey Garrison.

Despite the capture and imprisonment of Major Moses Corbet, Commander of the Jersey Garrison, by French troops, Peirson ordered his troops to hold their ground at the center of the island.

He repelled several French attacks on the position. However, he was shot in the heart by a musket ball and died. During and after his death, the troops under his command were victorious in the Battle of Jersey.