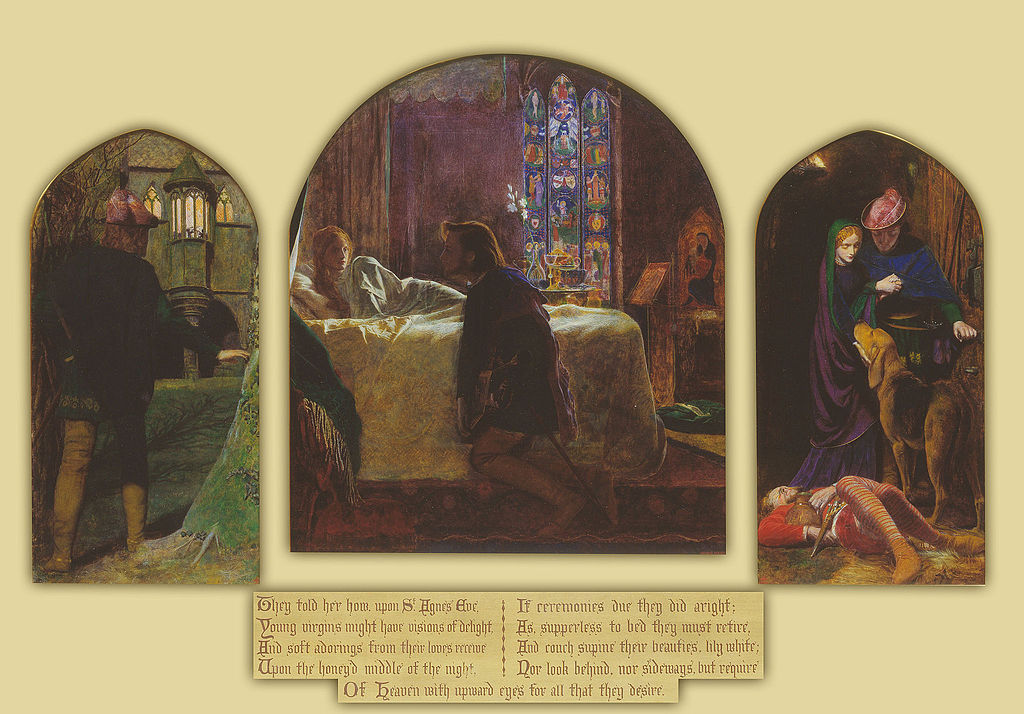 “The Eve of St Agnes” by Arthur Hughes

“The Eve of St Agnes” by Arthur Hughes is a triptych painting that depicts three scenes inspired by John Keats’s poem “The Eve of St Agnes.” The frame is inscribed with the fourth verse, which sets the scene for these episodes depicted.

The first scene shows the young man’s approach to the castle, where a banquet is evident from the windows’ silhouette. The second scene shows the man awakening the woman from her dreams, who finds her imaginary lover is real.

The final scene shows the lovers’ stealthy escape from the dark castle into the night as one of the drunken guards sleeps.

The following lines from the poem are written in the bottom of the original gold frame:

They told her how, upon St Agnes’ Eve,
Young virgins might have visions of delight,
And soft adorings from their loves receive
Upon the honey’d middle of the night.
If ceremonies due they did aright,
And supperless to bed they must retire,
And couch supine their beauties lily white,
Nor look behind, nor sideways, but require
Of heaven with upward eyes for all that they desire.

The man’s name in the poem is Porphyro, and the women’s name is Madeline, and they escape during the drunkenness of the revelry on the Eve of St Agnes.

According to the poem, on a bitterly chill night, on the Eve of St Agnes, an alcohol-fueled celebration has begun in the castle, while Madeline pines for the love of Porphyro, sworn enemy to her kin.

Madeline has heard the folk tale that she would receive sweet dreams of love from her lover Porphyro if, on this night, St. Agnes’ Eve, she retires to bed under the proper ritual of silence and receptiveness.

Earlier that night, Porphyro had made his way to the castle seeking out an older woman who helps and leads him to Madeline’s room, where he may but gaze upon her sleeping form. The older woman assists in the romantic encounter but fears damnation if Porphyro does not marry the girl.

Porphyro secretly watches as Madeline makes ready for bed and beholds her full beauty in the moonlight.

He then creeps forth as she sleeps, and Madeline wakes and sees before her the same image she has seen in her dream and, thinking Porphyro part of it, receives him into her bed.

Waking in full and realizing her mistake, she tells Porphyro she cannot hate him for his deception since her heart is so much in his.

Porphyro declares his love for Madeline and promises her a home with him. They flee from the castle, passing drunken revelers, and rush into the night.

The painting has been executed on one canvas, but each of the three scenes has been signed and dated, and framed to indicate a different scene.

When this artwork was exhibited at the Royal Academy in 1856, the critic John Ruskin wrote:

“The half-entranced, half-startled, face of the awakening Madeline is exquisite.”

The Eve of St. Agnes by John Keats

The Eve of St. Agnes is a Romantic narrative poem set in the Middle Ages. It was written by John Keats and published in 1820.

The poem was considered by many Victorians to be one of his finest and was influential in 19th-century literature.

The title comes from the evening before the feast of Saint Agnes, the patron saint of virgins. The eve falls on 20 January and has been referred to in ancient sources and legends as an occasion of celebration.

The poem is based on the folk belief that a girl could see her future husband in a dream if she performed certain rites on St. Agnes’s eve.

The rituals include that she should go to bed without supper, undress, lie naked on her bed with her hands under the pillow, and look up to the heavens. Then the proposed husband would appear in her dream, kiss her, and feast with her.

A Scottish version of the ritual involved young women meeting together on St. Agnes’s Eve at midnight to conduct their rituals and repeated a rhyme in a prayer to St. Agnes:

“Agnes sweet, and Agnes fair, Hither, hither, now repair; Bonny Agnes, let me see The lad who is to marry me.”

The Eve of St Agnes

Arthur Hughes (1832 – 1915) was an English painter and illustrator associated with the Pre-Raphaelite Brotherhood.

Hughes was born in London and joined the Royal Academy school, where he met the Pre-Raphaelite Group members.

Although Arthur Hughes was not officially elected to the Pre-Raphaelite Brotherhood (PRB), he is closely associated with the group and is constantly referred to as a Pre-Raphaelite.

Hughes’s legacy includes about 700 known paintings and drawings, along with over 750 book illustrations.

“The Eve of St. Agnes” a poem by John Keats

Keats – The Eve of St Agnes

“And soft adorings from their loves receive
Upon the honey’d middle of the night.”
– John Keats