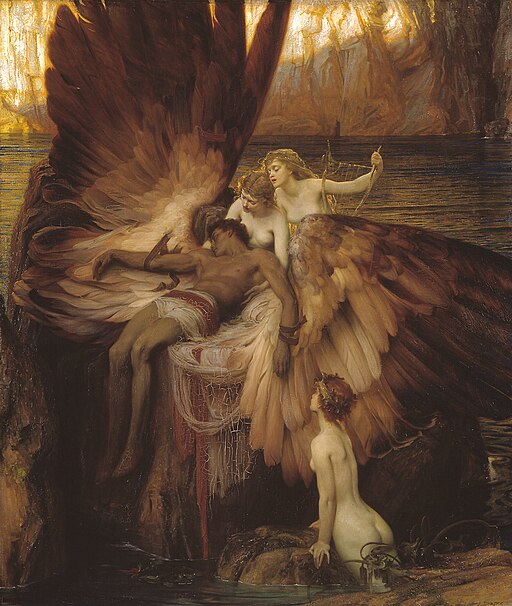 “The Lament for Icarus” by Herbert James Draper depicts the dead Icarus, surrounded by lamenting nymphs. Icarus’s wings are based on the bird-of-paradise pattern, and surprising, Icarus’s wings appear fully intact, contrary to the myth where the wax melted and Icarus fell flapping his bare arms.

This Pre-Raphaelite inspired image of a beautiful winged creature was used to create a symbolic, romantic, and heroic appearance.

The tanned skin of Icarus symbolizes his close approach to the Sun before falling. The rays of the setting sun on distant cliffs emphasize the transience of time.

Draper was focused mainly on ancient Greek mythological subjects in the 1890s. For this composition, Draper adopted Frederic Leighton’s method of depicting separate figures, for which he employed four young professional models.

Herbert James Draper (1863 – 1920) was an English Classicist painter whose career began in the Victorian era. The painting was awarded the gold medal at the Exposition Universelle of 1900 in Paris.

In his last years, his popularity faded; as the public tastes changed and mythological scenes became less popular, he concentrated more on portraits.

In Greek mythology, Icarus is the son of the master craftsman Daedalus, the Labyrinth creator. Icarus and his father attempt to escape from Crete using wings that his father constructed from feathers and wax.

Icarus’ father warns him first of complacency and then of hubris, asking that he fly neither too low nor too high, so the sea’s dampness would not clog his wings, nor the sun’s heat melts them.

Icarus ignored his father’s instructions not to fly too close to the sun; when the wax in his wings melted, he tumbled out of the sky and fell into the sea where he drowned.

Literary interpretations of the myth are focused on the tragic theme of failure at the hands of hubris.

Hubris describes a quality of extreme pride or overconfidence, in combination with arrogance. According to studies, hubris, arrogance, and pretension are related to the need for victory.

Hubris is usually perceived as a characteristic of an individual rather than a group and indicates a loss of contact with reality and an overestimation of one’s own competence or capabilities.

The term hubris originated in ancient Greek, where it had several different meanings depending on the context. In religious usage, it meant transgression against a god.

The Lament for Icarus by Herbert James Draper