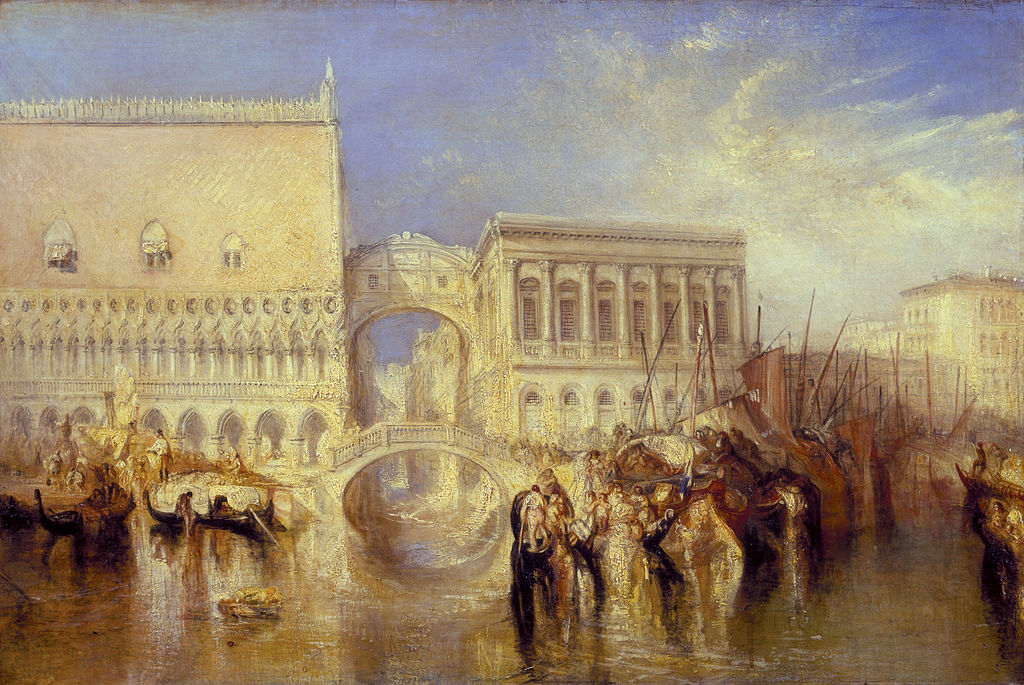 The Doge’s Palace is a palace built in Venetian Gothic style and was the residence of the Doge of Venice, the supreme authority of the former Venetian Republic.

It was founded in 1340, and extended and modified in the following centuries.

When Turner exhibited the painting in 1840, he accompanied it with lines based on Byron’s poem, Childe Harold’s Pilgrimage:

“I stood upon a bridge, a palace and
A prison on each hand.”

Indeed it was Byron who coined the name of the bridge. He derived its title from the mournful image of convicts taking their last glimpse of the city and freedom before being led down to the darkness of the cells.

Bridge of Sighs, connecting the interrogation rooms in the Doge Palace to the New Prison

The view from the Bridge of Sighs was the last view of Venice that convicts saw before their imprisonment. The bridge’s English name was bequeathed by Lord Byron in the 19th century.

It was a translation from the Italian “Ponte dei sospiri” from the suggestion that prisoners would sigh at their final view of Venice through the window before being taken down to their cells.

In reality, little could be seen from inside the 11 meter (36 ft) long bridge due to the stone grills covering the windows. Closed and covered, it consists of two corridors separated by a wall.

The Doge’s Palace, home to all the governmental institutions of the Republic, including those of Justice, and the places of punishment and detention.

The new building beyond the Rio di Palazzo was constructed to take these prison functions, with rooms for use by the magistrates.

The construction of these New Prisons, connected to the Palace with the subsequent creation of the Bridge of Sighs.

The New Prisons represent one of the first examples in Europe, of an isolated, single-block building, as a state prison.

Venice, the Bridge of Sighs

Bridge of Sighs in Venice

Gondola Ride Under The Bridge of Sighs in Venice