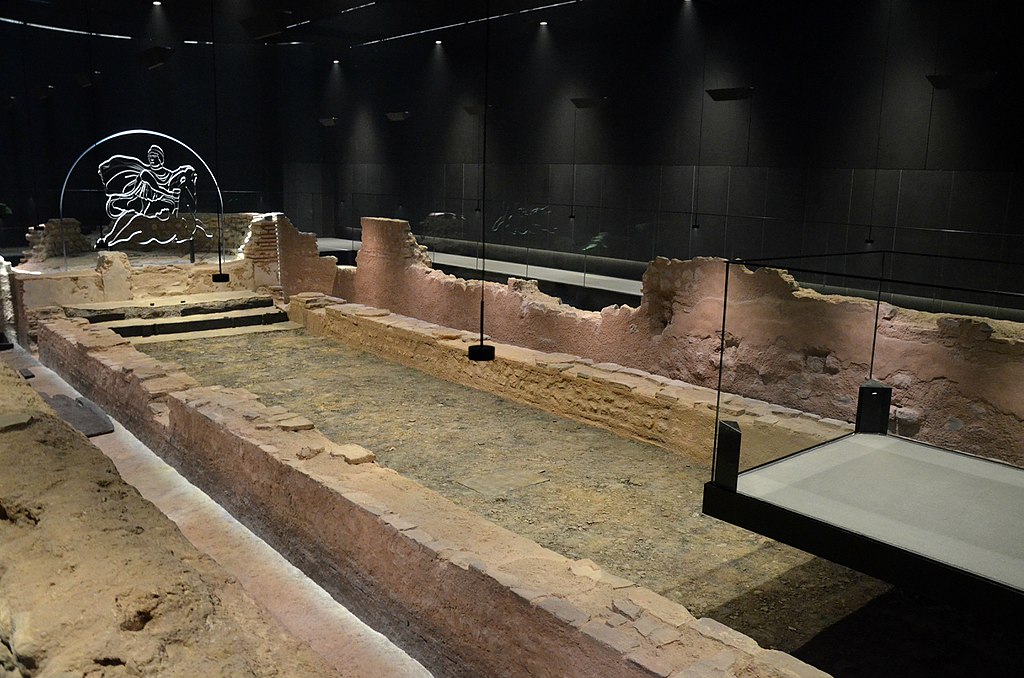 The London Mithraeum is a Roman Temple of Mithras discovered in 1954 in Walbrook, London, and is one of the most famous 20th-century Roman discoveries in London.

The temple was built in the mid-3rd century and dedicated to Mithras and several other deities popular among Roman soldiers. Much later, it was rededicated to Bacchus in the early fourth century.

Finely detailed third-century white marble likenesses of Minerva, Mercury, Mithras, and Serapis were found during the excavations. Some appear to have been carefully buried within the temple at the time of its rededication.

The quality marble sculptures were imported from other parts of the Roman Empire. There are also several coarser locally-made clay figurines of Venus, combing her hair. These artifacts are on display in the Museum of London.

Among the sculptures that were found was the head of Mithras recognizable by his Phrygian cap. The base of the head is tapered to fit a torso, which was lost. 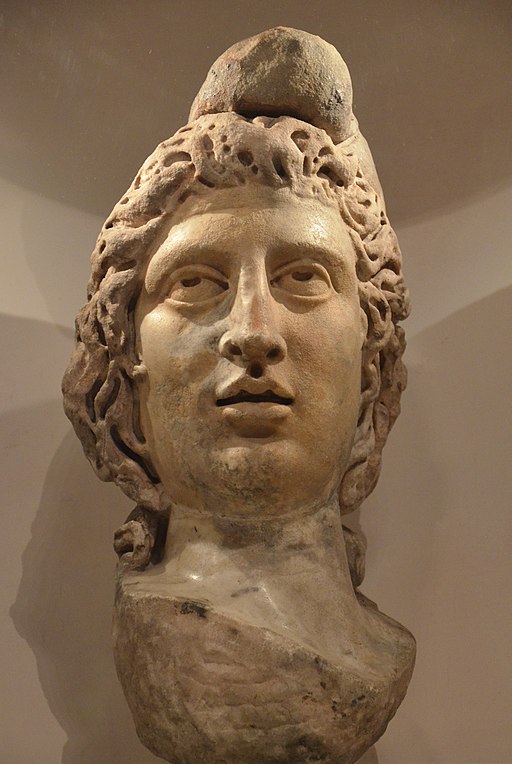 Head of Mithras in a Phrygian cap  from Walbrook Mithraeum in Londinium, AD 180-220, Museum of London, Britain

The Roman temple, when it was initially built, would have stood on the east bank of the now covered-over River Walbrook, a key freshwater source in Roman Londinium.

The original Mithraeum was built partly underground, recalling the cave of Mithras where the Mithraic epiphany took place.

The temple site was uncovered in 1954 during excavation work for the construction of a modernist office block.

The London Mithraeum ruins were dismantled and moved 100 meters to Temple Court, Queen Victoria Street, where the foundations were reassembled at street level for an open-air public display.

In 2010 during a development project by the Bloomberg company, it was agreed that the Mithraeum was to be restored to its original site as part of Bloomberg’s new European headquarters.

The new site is 7 meters (23 ft) below the modern street level, as part of an exhibition space beneath the Bloomberg building.

The ruins are reconstructed as they appeared at the end of the excavation in  1954, reflecting the first building phase of around AD 240 without any later Roman additions to the site.

The majority of the stones and bricks are original. The wood, render, and lime mortar is new but based on mortar samples from contemporary Roman London structures. The temple is displayed with a selection of artifacts found on the site.

A Mithraeum is a Mithraic temple, erected in classical antiquity by the worshippers of Mithras. Most Mithraea are dated between 100 B.C. and A.D. 300, mostly in the Roman Empire.

The Mithraeum was either an adapted natural cave or a building imitating a cave below an existing building.

A Mithraeum is usually a singular entrance or vestibule, which stands opposite from an apse-shaped wall.

The wall held a pedestal altar often in a recess with raised benches along the sidewalls for the ritual meal.

Many mithraea that follow this basic plan are scattered over much of the Roman Empire’s former territory. Later many became converted to crypts beneath Christian churches.

In Britain, these were located where the legions were stationed along the frontiers.

One of the crucial artifacts discovered at Mithraeum is a white marble relief depicting Mithras slaying the bull. The central medallion depicts the bull-slaying scene, and around the border are 12 signs of the zodiac.

The sun (‘Sol’) and moon (‘Luna’) are depicted in the top corners, the two wind gods in the bottom.

The inscription indicates that “Ulpius Silvanus, initiated into a Mithraic grade at Orange, France, paid his vows to Mithras,” This repayment of vows was perhaps by building a temple to Mithras in London.

Archaeological Finds at the London Mithraeum

During the construction works of 2010 to 2014, archeological excavations recovered more than 14,000 items, including a large assembly of tools.

Nearby, in its former streambed, a small square hammered lead sheet was found, on which an enemy of someone named Martia Martina had inscribed her name backward and thrown the token into the stream.

This tradition of Celtic culture was a way of reaching the gods that have preserved metal tokens in rivers throughout Celtic Europe. 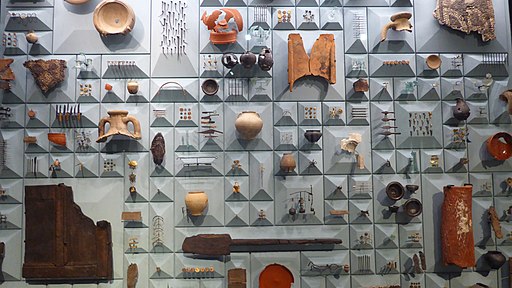 Artifacts from the excavation of the Mithraeum, on display at the Bloomberg building

The varied objects are thought to have been brought to the site in landfills and soils collected elsewhere and laid down to improve the marshy banks of the River Walbrook during the rebuilding of London after the Boudican revolt of AD 60.

The local waterlogged soil conditions then preserved organic material like leather shoes and a large assembly of wooden writing tablets, of which over 400 were found.

The tablets initially held a layer of dark wax, and messages were scratched into the wax with a stylus. The wax has perished, but the words were reconstructed from scratch marks left in the wood.

Among the messages is the oldest financial document from London, dated AD 57, and the earliest mention of London.

The Bloomberg Tablets are a collection of 405 preserved wooden tablets that were found at the site of the Bloomberg building in London.

The tablets are the earliest written documents found in Britain, dating from 50 to 80 AD in the early Roman period.

These tablets predate the Vindolanda tablets, which were previously the earliest writing examples found in Britain, dating to 100 AD or later.

The Making of the London Mithraeum

The London Mithraeum: A Future for the Past

Inspiring and experiencing at the London Mithraeum

Under the City of London a Roman Temple