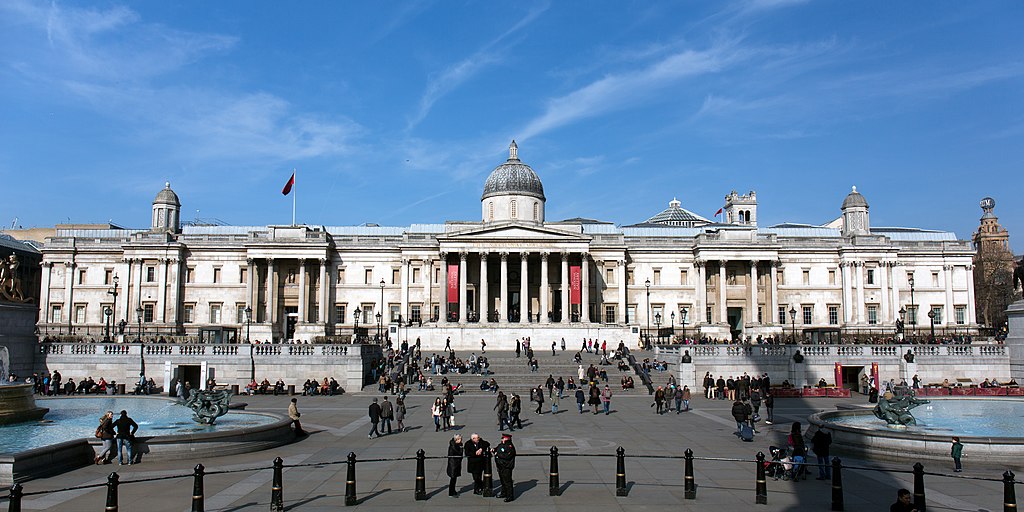 The National Gallery, London, is an art museum founded in 1824. Its collection includes over 2,300 paintings dating from the 13th century to the 20th century. It is one of the most visited art museums in the world, and its principal building facade facing Trafalgar Square has not changed for two-hundred years.

A Virtual Tour of The National Gallery, London

With the decline of the Roman Empire, the Medieval era began, and the foundation art of the period was Christian Byzantine art. In the Middle Ages, the dominance of the church resulted in religion dominating the funding of art. The Byzantine paintings that influenced early Western art made extensive use of gold paint, and the figures were presented in conventional forms.

Religious art dominated 13th Century European Art. However, at the same time, the Eastern Roman imperial church headed by the Byzantium Empire in Constantinople was losing its universal authority. The Eastern Roman church was becoming increasingly irrelevant as the Byzantium Empire shrank. In Western Europe, the Holy Roman Empire was also fragmented and provided limited cultural leadership. At this point, Italian Medieval Christian art started to take the lead.

14th Century Art refers to the period from 1301 to 1400. During this century, political and natural disasters ravaged both Europe. The Black Death claimed between 75 and 200 million lives, and England and France fought in the Hundred Years’ War in which the Kings of England claimed the French throne. The war marked both the height of chivalry and its subsequent decline.

During this period, the painting for altarpieces and smaller works became the focus. European painters were influenced by Byzantine models, especially in Italy, from where most early Western panel paintings come. The process of establishing a distinctly Western style began with Cimabue and Duccio. It was completed by Giotto, who is regarded as the starting point for the development of Renaissance painting. Most panel paintings remained more conservative than miniature paintings because they were made to be seen by the public.

The 15th century in Europe was the bridge between the Late Middle Ages and the Early Renaissance. Many technological, social, and cultural developments during this century enabled the European  Early Modern period.  In religious history, the Roman Papacy was split into two parts in Europe, and the unrest associated with the pre-Protestant Christian movements saw the rise of the Protestant Reformation in the following century.

The 16th century is regarded as the century in which Europe started its military and cultural dominance of the world. Spain and Portugal opened worldwide oceanic trade routes, and large parts of the New World in the Americas became Spanish and Portuguese colonies. This era of colonialism established mercantilism as a leading economic system.

The Protestant Reformation grew,  leading to numerous religious conflicts and diminishing the authority of the Roman Catholic Church. The first work ever on accounting was published, and the first book was written on secular international law. Copernicus proposed the heliocentric universe, which challenged long-held beliefs, which led to major revolutions in astronomy and science.

The High Renaissance in Italy is dated between  1475–1525 and is exemplified by the genius of Leonardo da Vinci whose depiction of human drama in “The Last Supper” set the benchmark for painting. His younger contemporary Michelangelo also had a profound effect on European artists with his Sistine Chapel ceiling painting, which was a masterpiece of a figurative composition.

The 17th century was characterized by the Baroque Art movement, the Dutch Golden Age,  the Scientific Revolution, and the Thirty Years’ War. It was during this period that the colonization of the Americas lead to the exploitation of the silver deposits, which resulted in significant inflation as wealth was drawn into Europe. It was also a period of development of culture in general, notably theatre, music, visual arts, and philosophy.

Dutch Golden Age painting, although it is included in the period of Baroque art, reflected the traditions of detailed realism inherited from Early Netherlandish painting. Dutch artists spend most of their careers painting portraits, genre scenes, landscapes or still lifes, in which many of their subjects were new in Western painting. The way the Dutch painted them in this period was decisive for their future development of art.

During the 18th century, Philosophy and Science increased in prominence, and the growing Enlightenment culminated in the French and American revolution. Music was a vital part of this century with Johan Sebastian Bach and George Frederick Handel in the first half. The latter half new forms like the symphony came to be with significant contributions from Joseph Haydn and Wolfgang Amadeus Mozart.

The 19th century was a period of social change, with slavery being abolished. The Second Industrial Revolution led to massive urbanization and higher levels of productivity and prosperity. European imperialism brought much of Asia and almost all of Africa under colonial rule. The British Empire increased, especially with the expansion of vast territories in Canada, Australia,  Africa, and India. By the end of the century, the British Empire controlled a fifth of the world’s land and one-quarter of the world’s population. This Pax Britannica period ushered in unprecedented globalization and economic integration on a massive scale.

After Rococo, there arose in the late 18th century, neo-classicism, best represented by such artists as David and his heir Ingres. This movement turned its attention toward landscape and nature as well as the human figure and the supremacy of natural order above humankind’s will. The idea that human beings are not above the forces of Nature was in contradiction to Ancient Greek and Renaissance ideals, where humanity was above all things and owned his fate. This thinking led romantic artists to depict the sublime, ruined churches, shipwrecks, and massacres.

By the mid-19th-century, painters became liberated from only depict scenes from religion, mythology, portraiture, or history. The idea “art for art’s sake” began to find expression in the work of painters like Francisco de Goya, John Constable, and J.M.W. Turner. Claude Monet, in 1857 he introduced to Plein air painting, a dominant force that led to Realism at mid-century was Gustave Courbet. In the latter third of the century, Impressionists like Manet, Monet, Renoir, Pissarro, Sisley, Morisot, Cassatt, and Degas worked in a more direct approach than had previously been exhibited publicly.

The 20th century was dominated by World War I, World War II, nuclear power, space exploration, and the Cold  War. The Digital Revolution and advances in communication delivered instantaneous worldwide computer communications.  The global population reached 6 billion, and global literacy averaged 80%, global lifespan-averages exceeded 40+ years for the first time in history, with over half achieving 70+ years.

In the 20th century, many artists felt a need to create a new kind of art, which broadly can be labeled as Abstract Art. Abstract Art was a departure from reality in the depiction of imagery in paintings with a visual language of shape, form, color, and line to create a composition which may exist with a degree of independence from visual references in the world. Abstract art encompasses multiple Art Movements. Art movements are especially important in modern art when each progressive movement was considered as a new avant-garde.

The History of The National Gallery

The History of the National Gallery, started when the British government bought 38 paintings in 1824 from the heirs of a London businessman who was a patron of the fine arts and a collector. It was the prospect that his critical collection of paintings was about to be sold by his estate, and be lost to the nation, that galvanized the founding of the National Gallery. Unlike art museums in continental Europe, the National Gallery was not formed by nationalizing an existing royal collection. It came into being after the initial 1824 purchase and by private donations, which today account for the majority of the group. The National Gallery collection today covers most of the significant developments in Western painting.

The present building, the third to house the National Gallery, was designed starting in 1832. Only the façade onto Trafalgar Square remains mostly unchanged from that time, the rest of the building has been expanded piecemeal over the last nearly 200 years. The original building was criticized for its lack of space, which led to the establishment of the Tate Gallery for British art in 1897. The most recent extension of the National Gallery was the Sainsbury Wing, an extension to the west, which is a notable example of Postmodernist architecture in Britain.

Key historical Milestones in the History of the National Gallery include:

Your Visit to The National Gallery

The National Gallery is visited by millions of people every year, and it is free to visit the permanent collections at the British Museum. Special Exhibits have a fee for entry; however, the majority of the museum is free.  Before your visit, please check the museum’s website to confirm your visit details.

Tips for the National Gallery

Plan to visit the most famous objects of the museum at the first opening hour or during the late-night openings. Reserve the middle of the day for the less popular galleries. See your favorite masterpieces first thing in the morning or during a late-night session.

Check if the museum offers free tours or fee-based tours. Confirm availability via the website or at the information counter. There are also private tours available depending on your interests. A guided tour is an excellent way to gain an introductory overview of the many collections.

Entry to the National Gallery is free, so you do not need to see everything in just one visit. Spread your experience over multiple visits and take breaks for food and hydration. Reading this book during a tea or coffee break is a great way to refresh in between gallery visits.

Use the Museum Map

A map with the general layout of the museum, descriptions for the essential galleries, and highlight attractions within the museum is a useful aid. Plans are available at the inquiries desk and the bookshop.

The Organisation of the National Gallery Collection

The National Gallery’s rooms are organized by periods, and each century features some of the following artists.

Masterpieces from The National Gallery London

Looking Back on Leonardo – The National Gallery, London

Virtual Tour with Panoramic Views of the National Gallery

Panoramic Views of the National Gallery

“Which painting in the National Gallery would I save if there was a fire? The one nearest the door, of course.”
– George Bernard Shaw