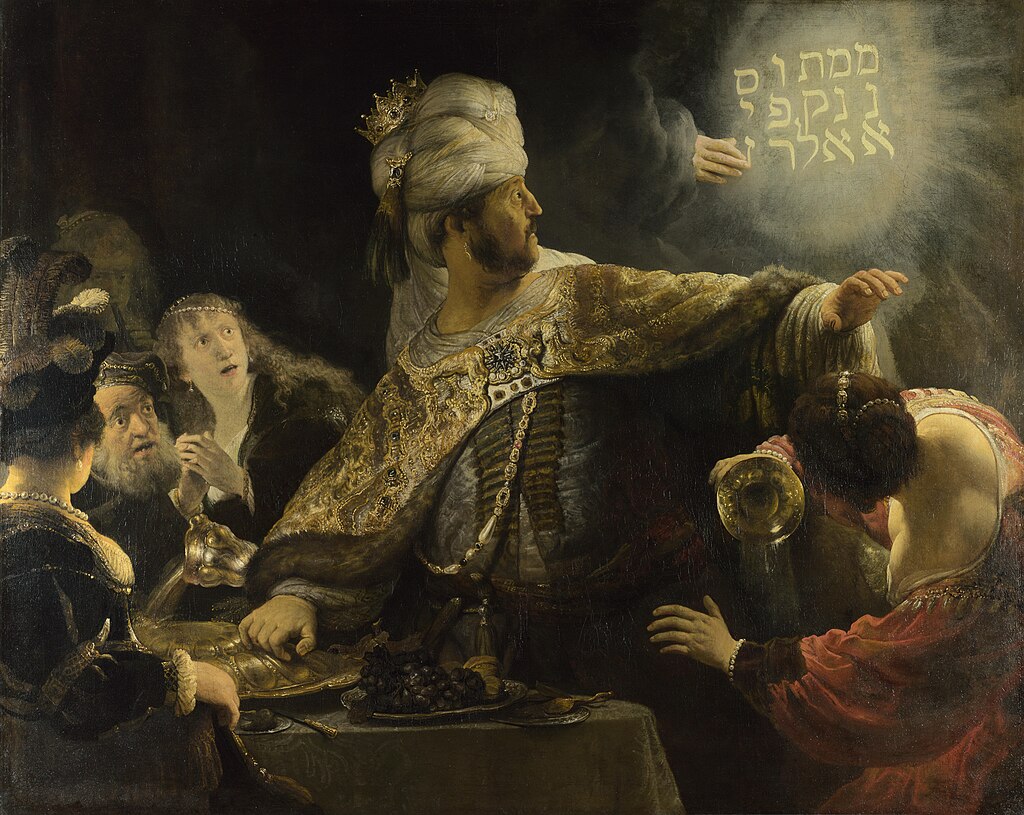 “Belshazzar’s Feast” by Rembrandt depicts a story from the Old Testament Book of Daniel. The background of the story is that the Babylonian King Nebuchadnezzar had looted the Temple in Jerusalem.

He stole the sacred artifacts, such as the golden cups, from the Temple. In Book of Daniel, his son Belshazzar used these cups for a great feast. During the feast, the hand of God appeared and wrote an inscription on the wall.

Belshazzar and his advisers were not able to decipher the inscription and had to send for Daniel to help them with the translation. The inscription on the wall states:

“God has numbered the days of your kingdom and brought it to an end.
You have been weighed in the balances and found wanting.
Your kingdom is given to the Medes and Persians.”

This painting was Rembrandt’s attempt to establish himself as a painter of large, baroque history paintings.

Rembrandt’s technique is exceptional, and his palette was unusually rich, encompassing such pigments as vermilion, smalt, lead-tin-yellow, yellow and red lakes, ochres, and azurite.

Rembrandt lived in the Jewish Quarter of Amsterdam and derived the Hebrew inscription from a book by his friend, the Rabbi, and printer, Menasseh ben Israel.

Rembrandt mistranscribed one of the characters and arranged them in columns, rather than right to left, as Hebrew is written.

In 1834 the painting was stolen from its then-owner, a picture dealer living in London. One of the thieves was found guilty and transported to Tasmania, Australia.

Belshazzar was the eldest son of Nabonidus, the last king of the Neo-Babylonian empire, and regent for his father. He was killed when Babylon fell to the Persians in 539 BCE.

Belshazzar appears as a central character in the story of Belshazzar’s feast. Daniel’s Belshazzar is not malevolent, and he rewards Daniel for his interpretation of the writing.

Still, in later Jewish tradition, he is presented as a tyrant who oppresses the Jewish people.

In the Book of Daniel, during a feast, while Babylonians eat and drink from the holy vessels of Yahweh’s Temple, and during the feasting, Belshazzar sees the handwriting on a wall.

Daniel interprets the writing as a judgment from Yahweh, the God of Israel, foretelling the fall of Babylon. Daniel tells Belshazzar that because he has not given the honor to God, his kingdom will be given to the Medes and Persians.

Belshazzar is killed that night, and Darius, the Mede, takes the kingdom.

The Book of Daniel was compiled shortly after 164 BCE, following the Maccabean Revolt. The story of Belshazzar’s feast is historical fiction, and several details are not consistent with historical facts.

Belshazzar is portrayed as the king of Babylon and “son” of Nebuchadnezzar. However, he was the son of Nabonidus, one of Nebuchadnezzar’s successor and he never became king in his own right.

In the story, the conqueror who inherits Babylon is Darius the Mede, but no such individual is known to history, and the invaders were Persians.

Rembrandt van Rijn was an innovative and prolific master draughtsman, painter, and printmaker.

He is generally considered one of the greatest visual artists in the history of art and the most important in Dutch art history.