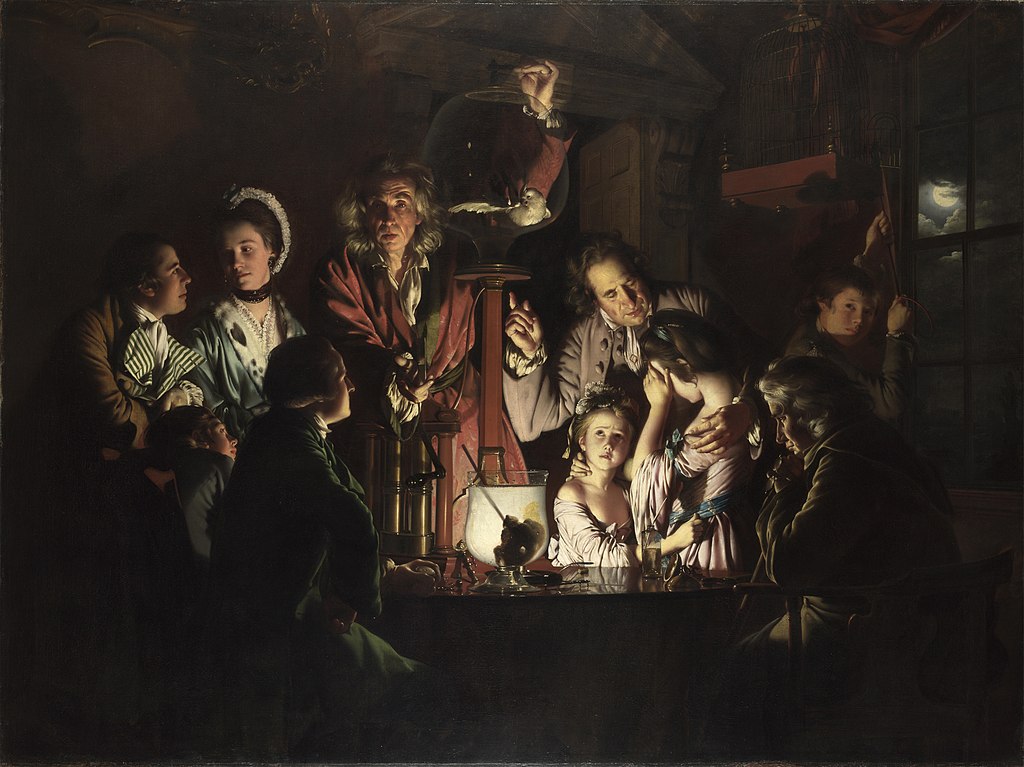 “An Experiment on a Bird in the Air Pump” by Joseph Wright depicts a natural philosopher, recreating Robert Boyle’s air pump experiments, where a bird is deprived of air.

The experiment is conducted before a group of onlookers. They show a variety of reactions, but for most of the audience, their scientific curiosity overcomes concern for the bird.

The central figure looks out of the picture, inviting the viewer’s participation in the experiment. Aside from that of the children’s reaction, little sympathy is directed toward the bird.

This painting is only one of many candlelit scenes that Wright painted during the 1760s.

The picture departed from the conventions of the time by depicting a scientific subject in a respectful way that formerly was reserved for paintings of historical or religious significance.

Wright specialized in representing the Industrial Revolution and the scientific advances of the Enlightenment.

Joseph Wright was an English landscape and portrait painter. He was one of the first painters to express the spirit of the Industrial Revolution.

Wright is notable for his emphasis on the contrast between light and dark, and, for his paintings of candlelit subjects.

His pictures of the birth of science are a significant record of the struggle of science against religious values in the period known as the Age of Enlightenment.

Science during the Enlightenment

Science played an important role during the 18th century of the Enlightenment, during which writers and thinkers supported the sciences and favored the development of free speech and thought.

Enlightenment science much valued empiricism and rational thought and was embedded in the Enlightenment ideal of advancement and progress.

Gentlemen scientists or also called natural philosophers introduced the public to many scientific theories and increased the popularity of science among the increasingly literate population.

Scientific societies grew out of the Scientific Revolution as the creators of scientific knowledge in contrast to the scholasticism of the university.

During the Enlightenment, learned societies became the cornerstone of organized science. A large number of official academies and societies were founded in Europe, and by 1789 there were over seventy formal scientific societies.

The influence of science also began appearing more often in art, poetry, and literature during the Enlightenment.

The Industrial Revolution was the transition to new manufacturing processes from about 1760 to the 1840s.

This revolution included going from hand production methods to machines, the increasing use of steam power, the development of machine tools, and the rise of the factory system.

The Industrial Revolution marked a significant turning point in history as almost every aspect of daily life was influenced in some way.

An Experiment on a Bird in the Air Pump

Joseph Wright of Derby. An Experiment on a Bird in the Air Pump

“Nothing has such power to broaden the mind as the ability to investigate systematically and truly all that comes under thy observation in life.”
– Marcus Aurelius

“Men love to wonder, and that is the seed of science.”
– Ralph Waldo Emerson

“Touch a scientist and you touch a child.”
– Ray Bradbury

“Science is not only a disciple of reason but, also, one of romance and passion.”
– Stephen Hawking

“If you believe in science, as I do, you believe that there are certain laws that are always obeyed.”
– Stephen Hawking

“The most exciting phrase to hear in science, the one that heralds new discoveries, is not ‘Eureka!’ but ‘That’s funny…’ ”
– Isaac Asimov

“Somewhere, something incredible is waiting to be known.”
– Carl Sagan

“A man who dares to waste one hour of time has not discovered the value of life.”
– Charles Darwin

“Nobody climbs mountains for scientific reasons. Science is used to raise money for the expeditions, but you really climb for the hell of it.”
–  Edmund Hillary

“The great tragedy of science – the slaying of a beautiful hypothesis by an ugly fact.”
– Thomas Huxley

“The good thing about science is that it’s true whether or not you believe in it.”
– Neil deGrasse Tyson

“Each problem that I solved became a rule, which served afterward to solve other problems.”
– Rene Descartes

“We can lick gravity, but sometimes the paperwork is overwhelming.”
– Wernher von Braun

“The human brain is an incredible pattern-matching machine.”
– Jeff Bezos

“Science is a way of thinking much more than it is a body of knowledge.”
– Carl Sagan

“A scientific truth does not triumph by convincing its opponents and making them see the light, but rather because its opponents eventually die and a new generation grows up that is familiar with it.”
– Max Planck

“I believe there are no questions that science can’t answer about a physical universe.”
– Stephen Hawking

An Experiment on a Bird in the Air Pump

Bird in the Airpump

“Only two things are infinite, the universe and human stupidity,
and I’m not sure about the former.”
– Albert Einstein