Bacchus and Ariadne by Titian

“Bacchus and Ariadne” by Titian depicts Bacchus, the god of wine, emerging with his followers from the right of the scene and, according to myth, falling in love at first sight with Ariadne.

Titian shows Bacchus leaping from his chariot to protect Ariadne, abandoned on a Greek island and deserted by her lover Theseus, whose ship sails away to the far left of the picture.

Initially, the commission for this painting was given to Raphael. Unfortunately, Raphael died young, and Titian was allowed to paint this mythological subject during 1522 for a wealthy patron. 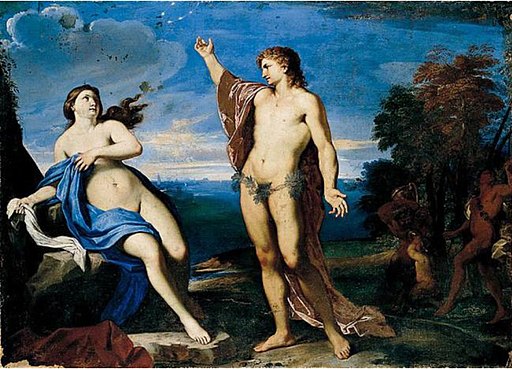 Ariadne’s story begins when, as a daughter of the King Minos of Crete, she helps Theseus, an Athenian hero, kills the Minotaur, a half-man, and half-bull, who lived in a labyrinth on the island of Crete.

Ariadne saves Theseus by giving him a ball of thread, which Theseus ties to the maze entrance, and he then unwinds the thread as he makes his way through the maze.

After he finds the Minotaur and kills him, he finds his way out of the labyrinth by following Ariadne’s thread back to the entrance.

After achieving his mission of killing the Minotaur, he sets sail to return to Athens, and he takes Ariadne with him. His ship stops on the island of Naxos, where Ariadne falls asleep and is then deserted by Theseus.

When Ariadne wakes up, she searches the shore of Naxos, vainly looking for her lost lover.

Titian has imagined the scene in which Ariadne is surprised by Bacchus, the god of wine, and his partying entourage.

Bacchus falls in love with Ariadne and offers to marry her, and promise her a crown of stars as a wedding gift, which can be seen in Titian’s painting above Ariadne.

In other versions of the story, Bacchus offers Ariadne the sky as a wedding gift, where she later becomes the constellation of the Northern Crown (Corona Borealis).

Bacchus and Ariadne’s story is based on Roman legend written by Roman poets Catullus (c.84-54 BCE) and Ovid (43 BCE-17CE).

Bacchus is in his chariot, and now Ariadne also has her chariot. Ariadne was a favorite subject for paintings, sculptures, and vases, with over 400 images of Ariadne in various art pieces, which are included at the Warburg Institute Iconographic Database. 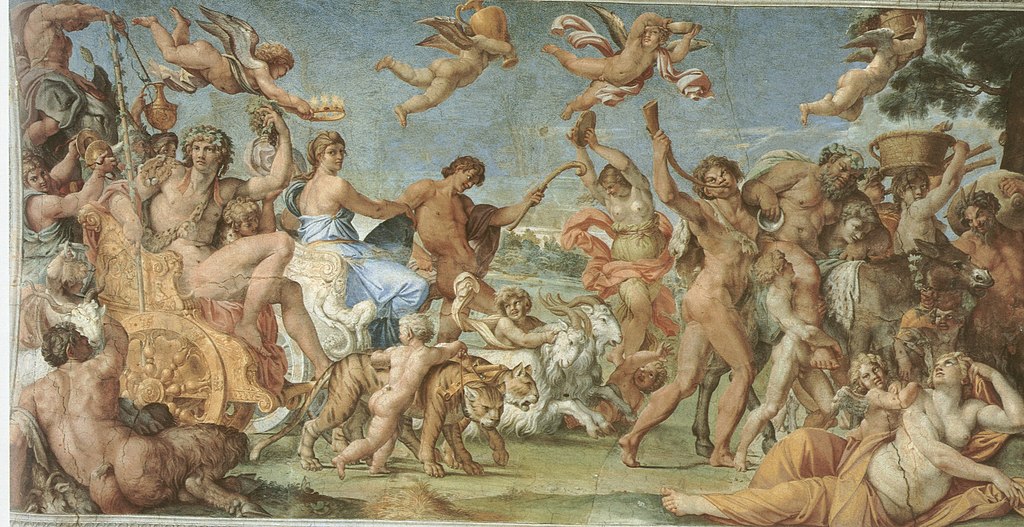 “Bacchus and Ariadne” by Annibale Carracci (1597 )

Titian was the foremost artist of Venetian painting during the 16th century.  His “Bacchus and Ariadne” composition is full of movement and color, with the figures dancing and celebrating with some poses taken from Greek sculpture of classical antiquity.

An example is a satyr struggling with snakes in this painting, whose image is reminiscent of the Greek statue Laocoon and His Sons.

Bacchus is the Roman equivalent of Dionysus, the god of wine, fertility, ritual madness, religious ecstasy, and theatre in ancient Greek religion and myth.

Wine played an important role in Greek culture, and the cult of Dionysus was the main religious focus for its unrestrained consumption.

Dionysus is also known as Bacchus, the name adopted by the Romans.  As “the liberator,” his wine, music, and ecstatic dance frees his followers from self-conscious fear and care and subvert the oppressive restraints of the powerful.

Titian: Painting the myth of Bacchus and Ariadne

Bacchus and Ariadne | A Thirst for Art