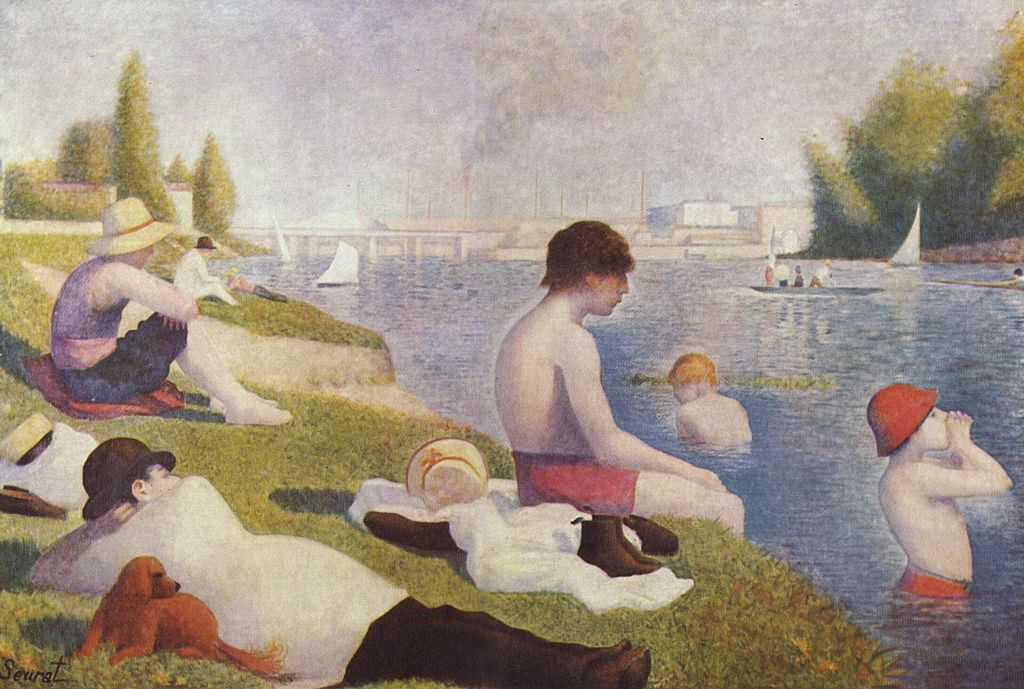 “Bathers at Asnières” by Georges Seurat

“Bathers at Asnières” by Georges Seurat depicts a brilliant Seine River scene near a working-class suburb of Paris, over 100 years ago.

On the right-hand foreground of the canvas are two young bathers in the water and one on the grassy riverbank.

On the left are four figures and a dog resting on the river bank, enjoying the water views. In the background are trees, buildings, walls, a bridge, and several smoking industrial chimneys.

Seurat spent most of 1883 working on this large canvas, which was his first major painting. Impressionism influenced him in the use of color and light.

However, he departed from the Impressionist style. Seurat used a combination of sophisticated brush stroke techniques and meticulous planning for the application of contemporary color theory to bring a unique vibrancy and timelessness to this masterpiece.

Seurat applied to the French art establishment to have this work exhibited, but it was rejected, and at the time, this artwork puzzled many of Seurat’s contemporaries.

This painting did not receive acclaim until many years after Seurat’s death, and the appreciation of this painting only grew during the twentieth century.

Georges Seurat (1859 – 1891) is recognized for his innovative use of painting media and for devising the painting techniques known as chromoluminarism and pointillism.

He was passionate about abstraction and precision and completed this painting when he was twenty-four years old.

Unfortunately, Seurat died at the age of thirty-one, but his work and this monumental painting altered the direction of modern art by initiating a new art style, Neo-impressionism.

Composition of Seurat’s “Bathers at Asnieres”

“They see poetry in what I have done. No. I apply my methods, and that is all there is to it.”
– Georges Seurat