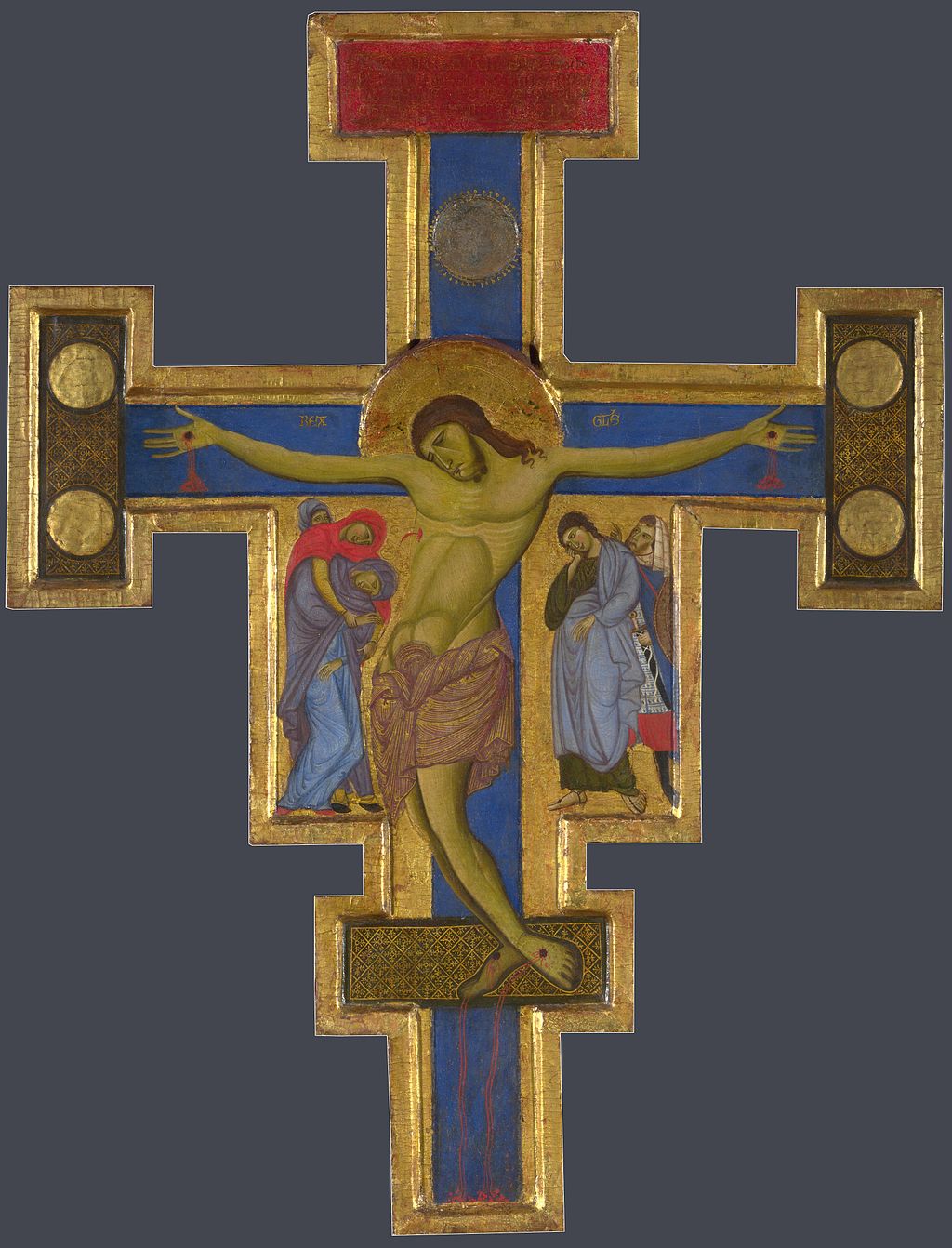 Crucifix by Master of Saint Francis

The Crucifix by the Master of Saint Francis was painted about 1265 – 70 with gold and tempera on a wooden panel.

In addition to the crucified Christ, it depicts the Three Maries on the left and Saint John the Evangelist, with the centurion.

The Centurion is one of the witnesses that recognized that Christ was the Son of God at the Crucifixion. The words ‘Rex Gloriae’ on the cross, just above his arms, mean ‘King of Glory.’

This type of crucifix was often painted on both sides and was carried in religious processions.

The artist is called the Master of Saint Francis, which is the name given to the anonymous Italian painter, who worked sometime between 1250–1280.

The name of  “Master of Saint Francis” was created by an art historian in 1885 to identify the artist who painted panel painting, St. Francis, with Angels, found in the Basilica of Saint Mary of the Angels in Assisi.

His work embodies the essential aspects of Italian and Byzantine art of this period.

The anonymous Italian painter we now call the Master of Saint Francis painted many frescoes, he designed stained glass window panels and painted wooden panels such as this Crucifix.

In the first three centuries of Early Christian art, the crucifixion was rarely depicted.

The earliest Western images originated in the mainstream of the church around the 5th-century.

Early church leaders regarded crucifixion with horror, and as an unfit subject for artistic portrayal.

The story of the discovery of the True Cross and the development of the crucifixion site as a site for pilgrimage led to a change of attitude.

It was probably in Palestine that the image developed, as a pilgrim’s souvenirs from the Holy Land.

During the Middle Ages, the plain cross became depicted, often as a “glorified” symbol, covered with jewels.

The Crucifixion of Christ in Art

Quotes about the Crucifix

“God had one son on earth without sin, but never one without suffering.”
– St. Augustine

“The cross is a one-time visual representation of God’s grief over sin.”
– Dean L. Harvey

“For the word of the cross is folly to those who are perishing, but to us who are being saved, it is the power of God.”
– St. Paul

“If any man would come after me, let him deny himself and take up his cross and follow me.”
– Jesus Christ

“God proved His love on the Cross. When Christ hung, and bled, and died, it was God saying to the world, ‘I love you.’”
– Billy Graham

“It is not the finest wood that feeds the fire of Divine love, but the wood of the Cross.”
– St. Ignatius of Loyola

“Jesus Christ lived in the midst of his enemies. In the end, all his disciples deserted him. On the Cross, he was utterly alone, surrounded by evildoers and mockers. For this cause, he had come to bring peace to the enemies of God.”
– Dietrich Bonhoeffer,

“The crosses with which our path through life is strewn associate us with Jesus in the mystery of His crucifixion.”
– St. John Eudes

“I almost shudder at the thought of alluding to the most fatal example of the abuses of grief which the history of mankind has preserved – the Cross. Consider what calamities that engine of grief has produced! With the rational respect that is due to it, knavish priests have added prostitutions of it, that fill or might fill the blackest and bloodiest pages of human history.
– John Adams

“Whenever anything disagreeable or displeasing happens to you, remember Christ crucified and be silent.”
– St. John of the Cross

“And whoever does not take his cross and follow me is not worthy of me.” – Matthew 10:38

“The word “Christianity” is already a misunderstanding; in reality, there has been only one Christian, and he died on the cross.”
– Friedrich Nietzsche

“It costs God nothing, so far as we know, to create nice things;
but to convert rebellious wills cost Him crucifixion.”
– C. S. Lewis.