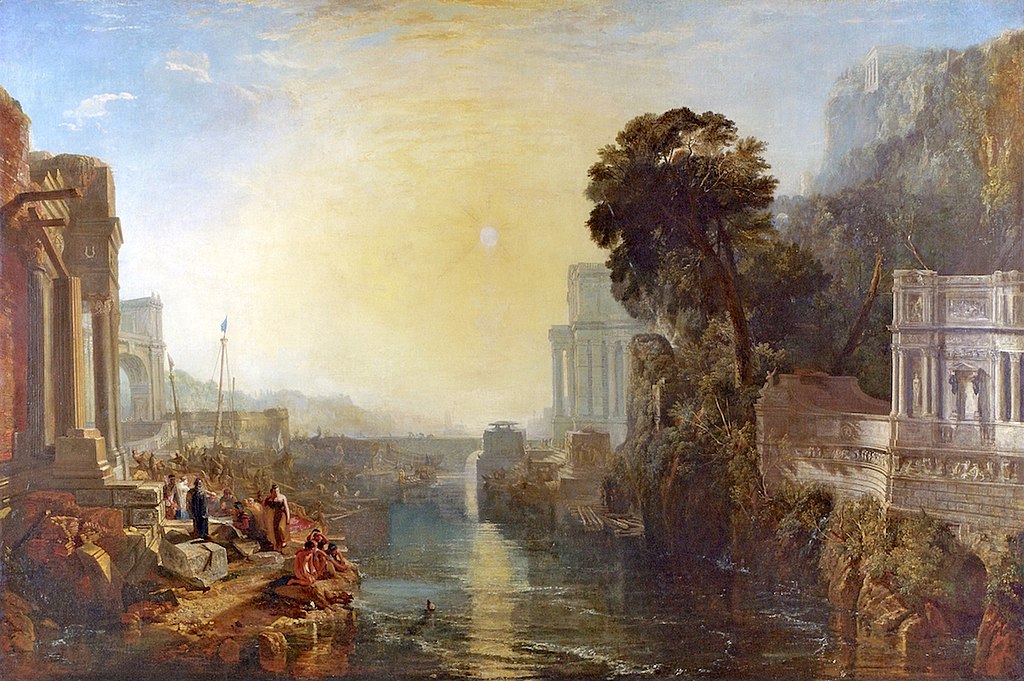 “Dido Building Carthage” by J. M. W. Turner depicts the classic story from Virgil’s Aeneid in which Dido, the figure in blue and white on the left, is directing the builders of the new city of Carthage. The figure in front of her, wearing armor, is her Trojan lover Aeneas.

The children playing with a toy boat symbolize the future naval power of Carthage, and the tomb of her dead husband Sychaeus, on the right bank of the estuary, foreshadows the eventual destruction of Carthage by the Roman descendants of Aeneas.

The painting was first exhibited at the Royal Academy summer exhibition in 1815 and was widely admired, but Turner kept the picture until his death and left it to the nation in the Turner Bequest.

Dido was, according to ancient Greek and Roman sources, the founder and first queen of Carthage. Today she is primarily remembered for her role in the epic,

Aeneid, by the Roman poet Virgil. In the poem, Aeneas, her lover leaves Carthage to found a city in Italy, leaving behind a broken-hearted Dido who committed suicide by stabbing herself.

Aeneas was according to Greco-Roman mythology, a Trojan hero, the son of the prince Anchises and the goddess Aphrodite (Venus).

His father was a first cousin of King Priam of Troy, making Aeneas a second cousin to Hector and Paris. He is mentioned in Homer’s Iliad, but in Roman mythology, he is an ancestor of Romulus and Remus, who were the founders of Rome.

Carthage became the capital city of the ancient Carthaginian civilization, located on the eastern side of the Lake of Tunis in current-day Tunisia.

A town developed from a Phoenician colony into the capital of an empire dominating the Mediterranean during the first millennium BC.

The  Carthaginian empire became a threat to the Roman Empire, and its ancient city was destroyed by the Roman Republic in the Third Punic War in 146 BC and was later re-developed as Roman Carthage.

The Roman city was captured and occupied by Muslim conquest in 698.

According to Roman history, Phoenician colonists from modern-day Lebanon, led by Dido, founded Carthage c. 814 BC. Dido was an exiled princess of the ancient Phoenician city of Tyre.

At its peak, the metropolis she founded ruling 300 other cities around the western Mediterranean Sea and leading the Phoenician world.

Virgil’s Roman epic, the Aeneid, first introduces Queen Dido. Virgil ends his legend of Dido with the story that, when Aeneas farewells Dido, her heartbroken, she orders a pyre to be built where she falls upon Aeneas’ sword.

As she lies dying, she predicts eternal strife between Aeneas’ people and her own. Aeneas goes on to found the predecessor-state of the Roman Kingdom.

JMW Turner and the Love of Art

“Furthermore, I think Carthage must be destroyed.” – Cato the Elder

“Don’t tell me violence doesn’t solve anything. Look at Carthage.” – Robert A. Heinlein

“God has given to man no sharper spur to victory than contempt of death.” – Hannibal

“Cato never gave his opinion in the Senate upon any other point whatever, without adding these words, “And, in my opinion, Carthage should be destroyed.” – Plutarch

“Carthage was rapidly sinking into the state of barbarism from whence it had been raised by the Phoenician colonies and Roman laws; every step of intestine discord was marked by some deplorable victory of savage man over civilized society.” – Edward Gibbon