“Samson and Delilah” by Peter Paul Rubens depicts an episode from the Old Testament story of Samson and Delilah. Samson was a Hebrew hero of the ancient Israelites described in the Book of Judges.

Samson was granted immense strength to aid him against his enemies and allow him to perform superhuman feats, including defeating an army of Philistines.

However, if Samson’s long hair were cut, then his vow would be violated, and he would lose his strength. Unfortunately, he fell in love with Delilah, who betrayed him.

Delilah had been bribed by the Philistines to learn Samson’s secret of his great strength. Rubens portrays the moment when, having fallen asleep on Delilah’s lap, Samson’s hair is cut.

Delilah is shown with all of her clothes, but with her breasts exposed. The man cutting Samson’s hair is crossing his hands, which is a sign of betrayal.

Philistine soldiers can be seen waiting in the background waiting for Samson to lose his strength and to capture him. The older woman’s face standing behind Delilah may symbolize Delilah’s future looks.

The two women are shown with similar profiles. 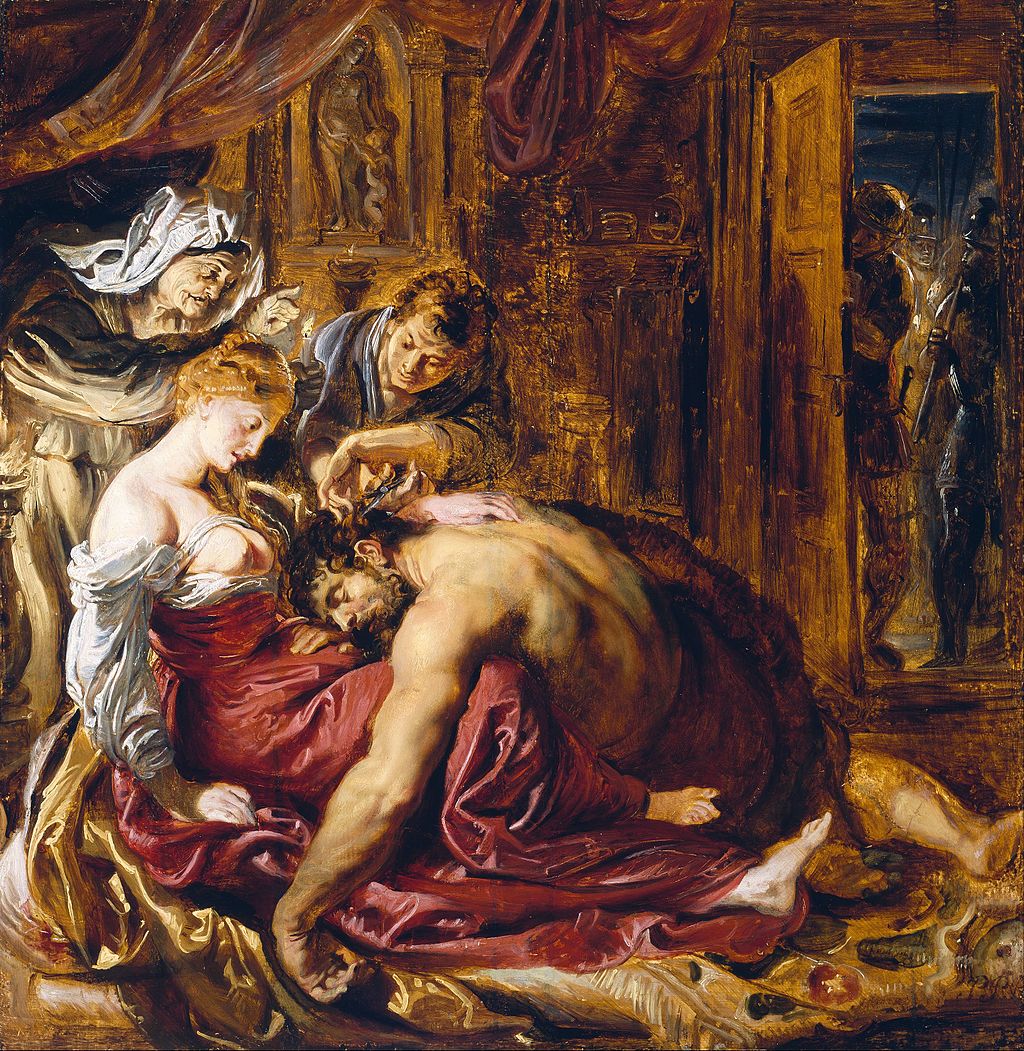 Samson and Delilah Sketch at the Cincinnati Art Museum

Rubens was commissioned by Nicolaas Rockox, the mayor (burgomaster) of Antwerp, to produce a painting of Samson and Delilah. The biblical story of misplaced trust had particular significance for politics at the time.

As part of his creative process, Rubens made a small oil sketch (now at the Cincinnati Art Museum) so that the patron could review and approve the composition.

With the mayor’s approval, a more substantial larger painting was executed (now at the National Gallery in London). Collectors prized Rubens oil sketches even during his lifetime for their skill and narrative composition, and many have survived.

Rubens’s sharp contrasts of light and shadow were influenced by Caravaggio, whose work Rubens would have seen when he stayed in Rome from 1600 to 1608.

Peter Paul Rubens was a Flemish artist who is considered the most influential artist of the Flemish Baroque tradition. R

Samson was betrayed by his lover Delilah, who ordered a servant to cut his hair while he was sleeping and turned him over to his Philistine enemies, who gouged out his eyes and forced him to grind grain in a mill at Gaza.

When the Philistines took Samson into their temple of Dagon, Samson was allowed to rest against one of the support pillars. Sensing his opportunity, he prayed to God.

He miraculously recovered his strength, allowing him to grasp hold of the columns and tear them down, killing himself and all the Philistines with him.

Delilah is bribed by the Philistines to discover the source of Sampson’s strength. After three failed attempts, she finally impels Samson into telling her the secret of his power.

He finally revealed that his oath to God was never to cut his hair. As he slept, Delilah ordered a servant to cut Samson’s hair, thereby enabling her to turn him over to the Philistines.