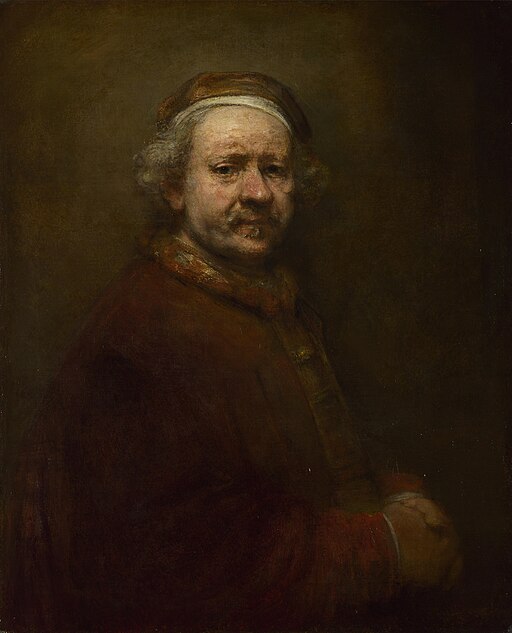 “Self Portrait at the Age of 63” by Rembrandt

“Self Portrait at the Age of 63” by Rembrandt was the last in his long series of self-portraits and painted in the year of his death. This painting is one of his final pictures. Despite his impending death, Rembrandt presents a self-assured and confident self.

Rembrandt employed his usual somewhat limited palette of lead white, ochres, and red flakes. The artist has depicted himself wearing a dark red coat and a beret, his hands clasped.

The composition draws the viewer to the face and is confronted by his steady and resolute gaze. When this painting was X-rayed, it revealed alterations to the composition.

The most significant change was in the arrangement of the hands. The initial position of the hands in this painting was more animated and dramatic, and one of the hands was holding a paintbrush.

Rembrandt changed the positioning and drama of the hands to make them more subtle and clasped before him and without the brush.

Rembrandt deliberately diminished the impact of the hands to draw attention to the face and the eyes. All of Rembrandt’s self-portraits were created by the artist looking at himself in a mirror. So his self-portraits are in reverse to his real features.

Rembrandt lived beyond his means and twelve years before this painting; he was forced to sell most of his pictures and his extensive collection of antiquities.

The sale list survives and gives us a good insight into Rembrandt’s collections. Unfortunately, the returns from the sales were disappointing, and sill, in debt, Rembrandt was also forced to sell his house and his printing-press.

Rembrandt outlived his wife, his later partner, and his son, and when he died, he was buried as a poor man in an unknown grave.

Rembrandt created nearly one hundred self-portraits, including over forty paintings, thirty-one etchings, and about seven drawings. This volume of self-portraits is high for any artist and represented around 10% of his body of work.

His oil paintings trace his progress from a young man, through to the hugely successful portrait-painter of the 1630s, and the troubled but complex portraits of his old age. According to Kenneth Clark, Rembrandt:

“turned self-portraiture into an autobiography.”

Self Portrait at the Age of 63

REMBRANDT’S Self Portrait at the Age of 63