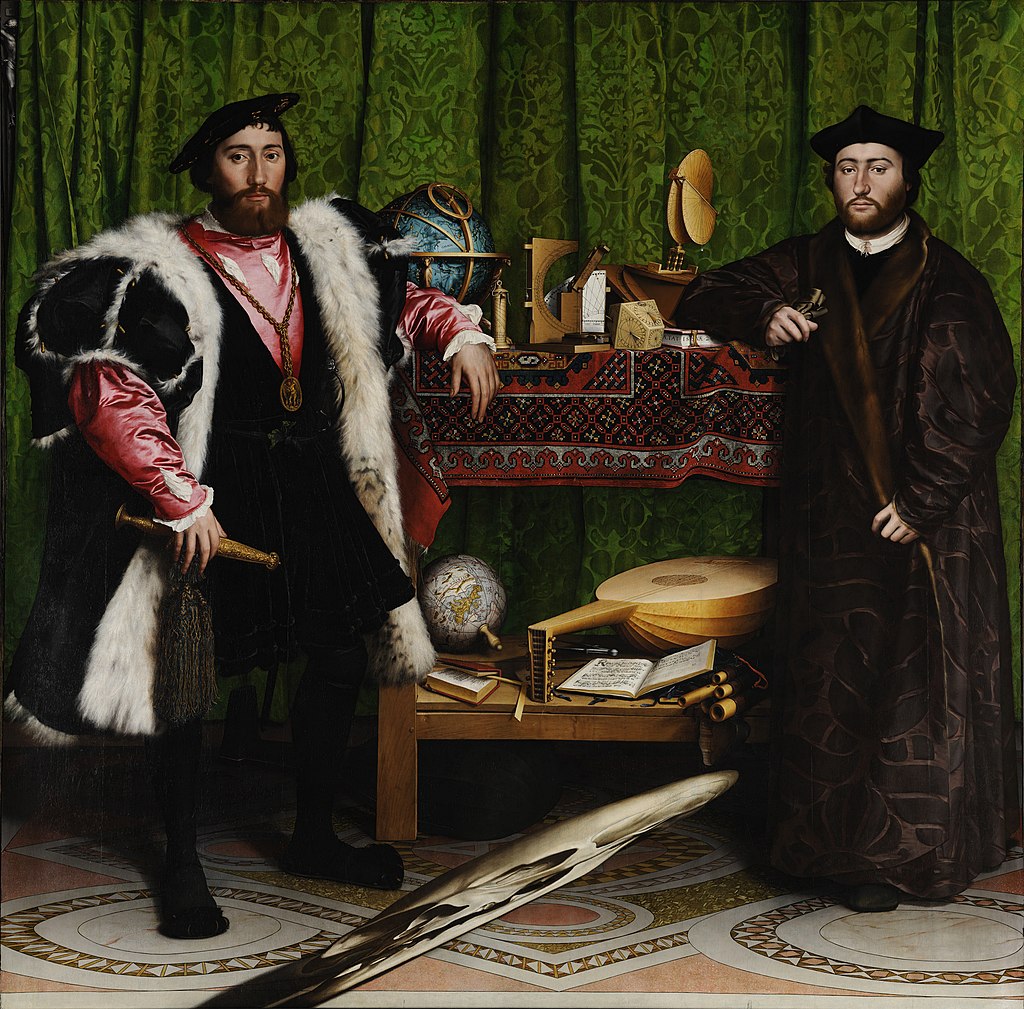 “The Ambassadors” by Hans Holbein the Younger

“The Ambassadors” by Hans Holbein, the Younger, is a grand size masterpiece but highly detailed and full of symbolism.

Created in the Tudor Period in the same year Elizabeth I was born, this double portrait depicts two wealthy, educated, and powerful men.

On the left is Jean de Dinteville, French ambassador to England. On the right is Georges de Selve, bishop of Lavaur, who acted on various occasions as ambassador to the Emperor, the Venetian Republic, and the Holy See.

In the foreground is the distorted image of a skull, a classic Renaissance image with a universal message of human mortality. When this image is viewed from a point at the extreme right of the painting, the distortion is corrected, and the skull image is evident.

Dinteville, who commissioned the painting and whose personal motto was:

may have requested the hidden skull was a symbol of the inevitability of death. 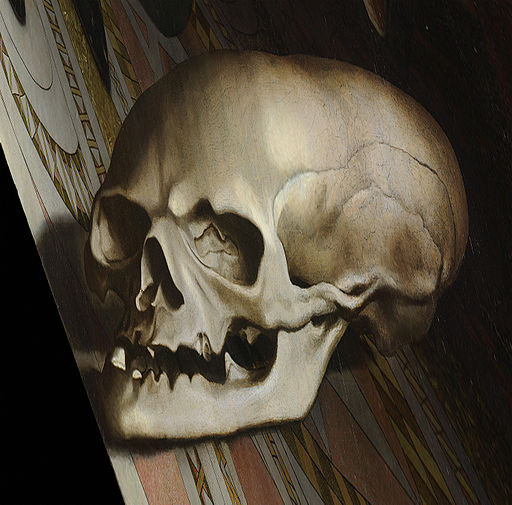 The anamorphic skull as restored by the viewing from the correct angle.

This painting follows the traditional style of the time, showing society’s elite with books and the new science instruments.

The top shelf objects include a celestial globe, a portable sundial, and various other devices used for understanding the heavens and measuring time.

On the bottom, the shelf is a lute, a case of flutes, a hymn book, a book of arithmetic, and a terrestrial globe.

During the same year, this painting was created, there was significant turbulent at the royal court. The period of turbulence included:

To mirror this turbulence, there are many interesting details and symbols in this painting:

Some art critics have argued that the top shelf with its celestial globe, astronomy tools, and the hidden crucifix symbolizes the heavens and redemption.

With the terrestrial planet, the shelf below, a hymn book, the musical instruments, and the book of mathematics represents the living world, with the opportunity for joy and endeavor.

The ground level, where the skull dominates, depicts looming death. 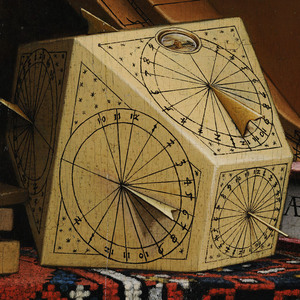 Holbein was a German and Swiss artist who traveled to England in 1526 and was welcomed into the humanist circle of Thomas More, where he quickly built a high reputation.

His portraits of the royal family and nobles were a historical visual record of the court when Henry asserted his supremacy over the English church.

Holbein had deftly survived the downfall of his first two high patrons, Thomas More and Anne Boleyn, but Cromwell’s execution damaged his career.

Although he managed to keep his place as King’s painter, his career never recovered. The site of Holbein’s grave is unknown and may never have been marked.

The Ambassadors: The Mysteries of Holbein’s Masterpiece

The Skull Illusion, The Ambassadors (1533), by Hans Holbein the Younger

“Why employ intelligent and highly paid ambassadors and then go and do their work for them? You don’t buy a canary and sing yourself.”
– John Keats