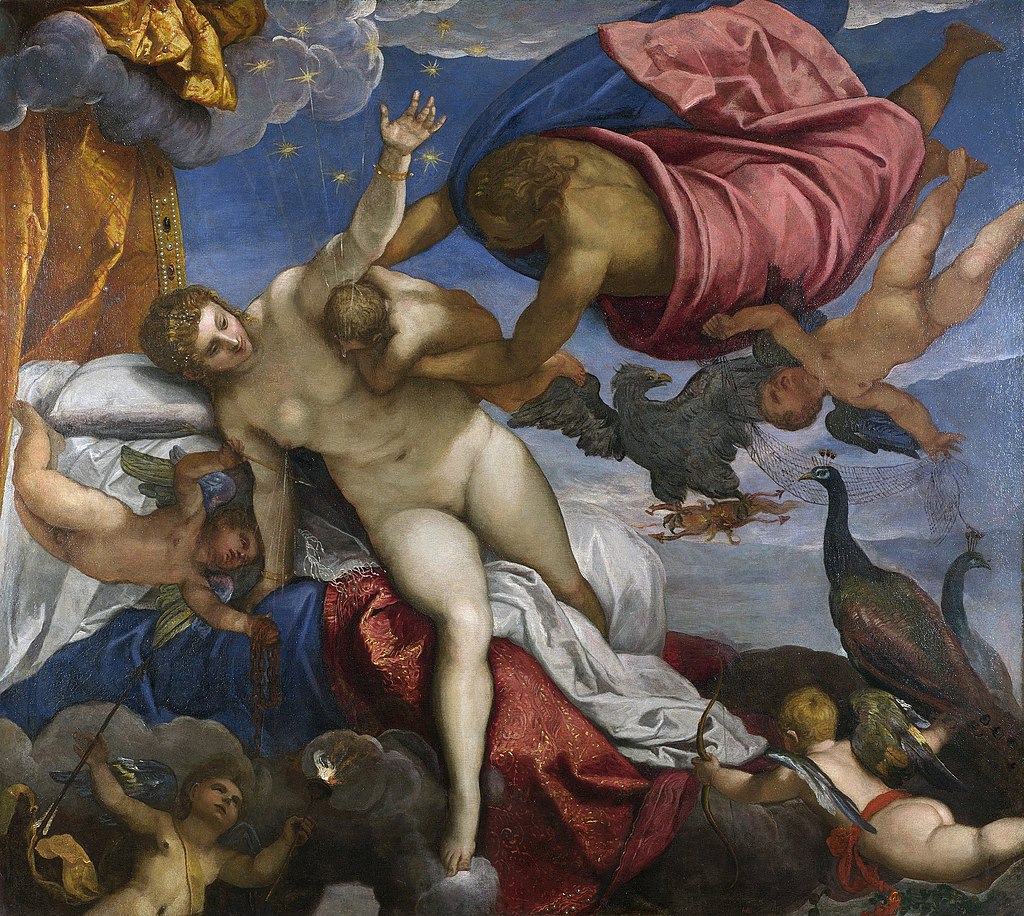 “The Origin of the Milky Way” by Tintoretto

“The Origin of the Milky Way” by Tintoretto depicts the myth about the infant Heracles who was brought to the Greek goddess Hera to be nursed as an infant.

In the ancient Greek version of the tale, Hera nursed Heracles out of pity, but he suckled so strongly that in pain, Hera pushed him away, and her milk sprayed across the heavens and there formed the Milky Way.

Fortunately for Heracles, he acquired supernatural powers with the divine milk. In the Roman version of the myth, the Roman god Jupiter wished to immortalize his infant son Hercules, whose mother was a mortal.

To give him immortally, Jupiter held Hercules to the breasts of the sleeping and unaware Roman goddess Juno and her milk spurted upwards to form the Milky Way.

Tintoretto’s source for this story was from a Byzantine botanical text-book which related how the milk which spurted upwards to form the Milky Way, while some fell downwards, giving rise to lilies.

Lilies were once part of the base of the painting until that piece of the original canvas was cut off.

Hera is the goddess of women, family, and childbirth in ancient Greek religion and myth, one of the Twelve Olympians and wife of Zeus.

One of Hera’s defining characteristics is her jealous and vengeful nature against Zeus’ numerous lovers and illegitimate offspring.

Hercules is a Roman hero and god. He was the equivalent of the Greek hero Heracles, who was the son of Zeus and a mortal.

The Romans adopted the Greek hero’s myths for their literature and art. In later Western art and literature, Hercules became a multifaceted figure with different characteristics for artists to explore.

Tintoretto was an Italian painter whose speed in painting, and the boldness of his brushwork he was referred to as Il Furioso by contemporaries.

His work is characterized by the dramatic and bold use of perspective.

The Milky Way is the galaxy that contains our Solar System. The name of our Galaxy describes its appearance from Earth.

It looks like a hazy band of light seen in the night sky formed from stars that cannot be individually distinguished by the naked eye.

The term Milky Way is a translation of the Latin from the Greek “milky circle.” From Earth, the Milky Way appears as a band because its disk-shaped structure is the view from planet earth.

Galileo Galilei first resolved the band of light into individual stars with his telescope in 1610. Until the early 1920s, most astronomers thought that the Milky Way contained all the stars in the Universe.

Observations by Edwin Hubble showed that the Milky Way is just one of many galaxies.

In Greek mythology, the Milky Way was formed after Hermes suckled the infant Heracles at the breast of Hera, while she was asleep.

When Hera awoke, she tore Heracles away from her breast and splattered her breast milk across the heavens.

In another version of the story, Athena, the patron goddess of heroes, tricked Hera into suckling Heracles voluntarily.

Still, he bit her nipple so hard that she flung him away, spraying milk everywhere.

The Origin of the Milky Way

“The Origin of the Milky Way” by Tintoretto

Tintoretto, the Origin of the Milky Way

The Formation of the Milky Way Galaxy

The mystery of the Milky Way

“In less than a hundred years, we have found a new way to think of ourselves. From sitting at the center of the universe, we now find ourselves orbiting an average-sized sun, which is just one of the millions of stars in our own Milky Way galaxy.”
– Stephen Hawking