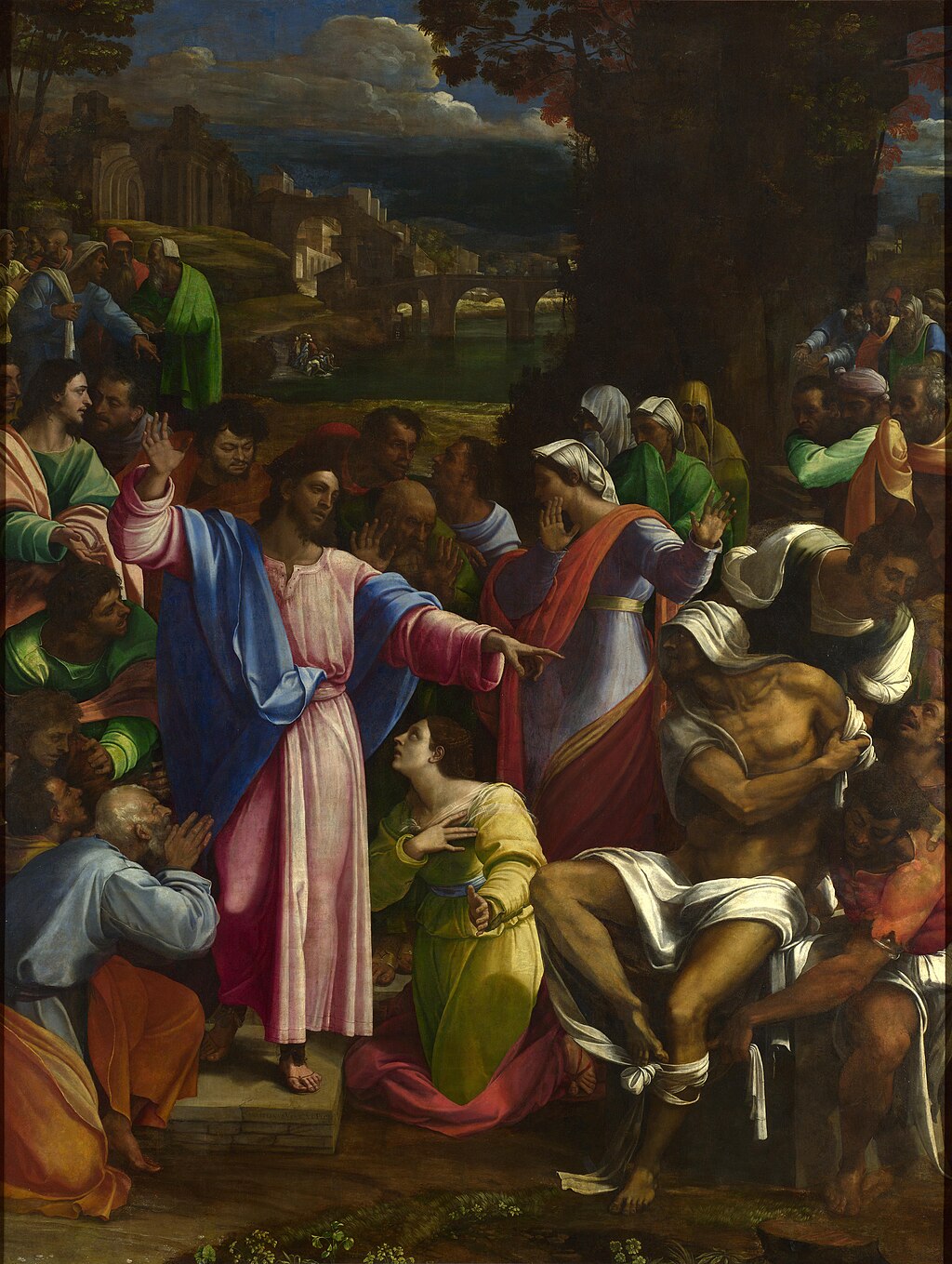 “The Raising of Lazarus” by Sebastiano del Piombo

“The Raising of Lazarus” by Sebastiano del Piombo is an altarpiece, intended for Narbonne Cathedral, for which Michelangelo supplied drawings for some figures. Several preparatory drawings for this altarpiece by both artists plus letters between them have survived down to our time  Lazarus’s resurrection from the dead was the most often depicted miracles in Medieval and Renaissance art, as both the most remarkable and the easiest to recognize visually in a composition.

This painting captures the moment just after:

In the upper left, a group of Jews and Pharisees are depicted discussing the event, which completes the story in the gospels. The standing female in orange is Martha of Bethany, sister of Lazarus and Mary. In the gospel, before the tomb is opened, she protests that the body will smell, and her gestures show her turning away from an expected smell. The Twelve Apostles are crowded to the left and behind of Christ. By this stage of the High Renaissance, not even Christ is given a halo.

This depiction is a grand composition of gesturing figures and bright colors. The effects of time have led to a general darkening of the painting, and changes in some of the color shades. This painting was commissioned by the Archbishop of Narbonne and later Pope Clement VII (r. 1523–24), in a contest between Sebastiano and Raphael. Raphael’s painting, called Transfiguration (now in the Vatican Pinacoteca), won the competition. Michelangelo was supporting Sebastiano in a rivalry with Raphael.

The painting is signed, “Sebastian the Venetian made this” in Latin on the stone platform below Christ. Born Sebastiano Luciani, after coming to Rome, he becomes “Sebastiano Veneziano” until in 1531, he became the Keeper of the Seal to the Papacy, and so got the nickname del Piombo after that, meaning “of the lead,” for his new job title. In Rome, he became one of the few painters to get on well with Michelangelo, who tried to promote his career by encouraging him to compete for commissions against Raphael. After the death of Raphael in 1520 he became Rome’s leading painter.

“The Raising of Lazarus” by Sebastiano del Piombo

“If a man devotes himself to art, much evil is avoided that happens otherwise if one is idle.”
– Albrecht Dürer