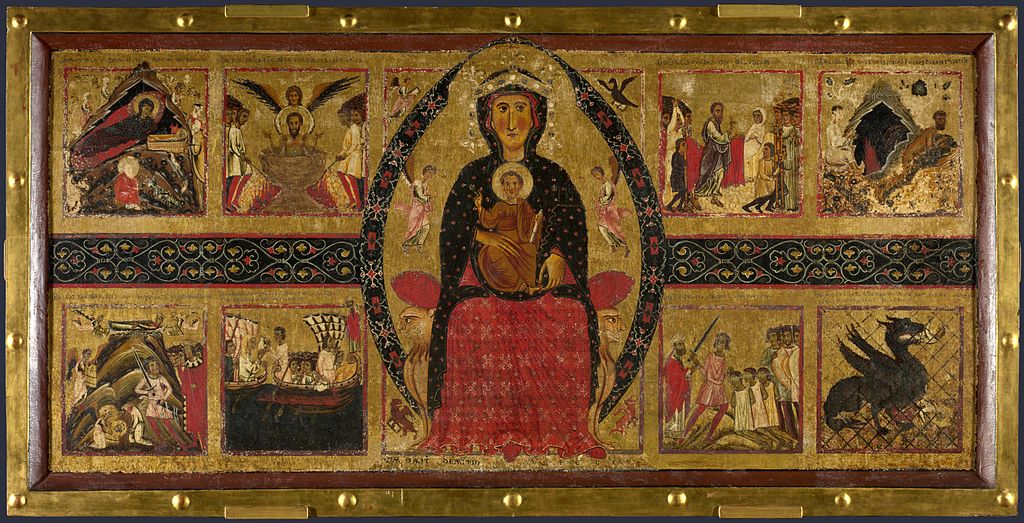 “The Virgin and Child Enthroned, with Narrative Scenes” by Margarito d’Arezzo depicts the Virgin, wearing a Byzantine crown and seated on a lion-headed throne while holding Christ who is sitting on her lap.

The earliest representations of Mother and Child were developed in the Eastern Empire, where Byzantine artists represented Mary with the royal crowns and the thrones of the Byzantine Empresses. Byzantine art played a long and critical role in Western Europe, especially when Byzantine territories included parts of Eastern Europe and much of Italy.

In the corners of the central scene are the symbols of the four Evangelists. The narrative scenes consist of eight smaller scenes on either side of the Virgin show episodes from the lives of saints.

These narrative scenes are paintings depicting the following stories:

Images of the Virgin Mary are common in Roman Catholicism and Eastern Orthodoxy and much rarer in Protestant art. Christianity has made more extensive use of images than related religions, in which figurative representations are forbidden, such as Islam and Judaism.

Byzantine art refers to the body of the Christian Greek art of the Eastern Roman or Byzantine Empire. The empire emerged from Rome’s decline and lasted until the Fall of Constantinople in 1453.  Many Eastern Orthodox states preserved many aspects of the empire’s art for centuries afterward.

Margarito or Margaritone d’Arezzo (fl. c. 1250–1290) was an Italian painter about whom little is known, and the only documentary record of his existence dates from 1262 when he lived in Arezzo, Italy. A fair number of his works are known to have survived. His paintings have been identified because most are signed, which was unusual for that age of art.

“In trial or difficulty, I have recourse to Mother Mary.”
– Saint Therese of Lisieux